WORLD China-funded railway transforms life of Kenyans one year on

China-funded railway transforms life of Kenyans one year on 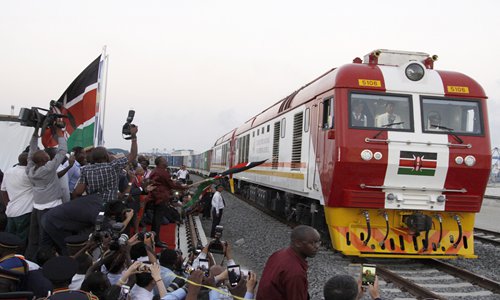 The SGR cargo train leaves for Nairobi from the port containers depot in Mombasa, Kenya, on May 30, 2017. (Photo: IC)

Chris Morara, who relocated from a village in western Kenya nine years ago to settle in Athi River industrial hub outside the country's capital Nairobi, has an unwavering quest to succeed in life.
The 40-year-old father of three, now a motorcycle driver with thriving business, has seen the industrial town he now calls home grow since the launch of the Mombasa-Nairobi Standard Gauge Railway (SGR) train service on May 31, 2017.
In an interview with the Xinhua News Agency ahead of the SGR train's 1st anniversary on June 4, Morara said it has boosted his fortunes, as the bulk of his passengers and cargo are from the Athi River terminus.
"My business has improved and we usually camp at the Athi River's SGR terminus at 1 pm to wait for customers," Morara said. "The SGR train has created employment opportunities, promoted business and made transport more efficient."
He charges $1.5 for ferrying a passenger to the terminus, while cargo generates a higher revenue for the savvy entrepreneur, who is determined to remain in the motorcycle transportation business for the long haul.
The famed modern passenger train, known as the Madaraka Express, makes two trips daily between Nairobi and the coastal city of Mombasa. Madaraka, a Swahili word, means responsibility, power and governance.
The train has attained an occupancy rate of over 95 percent while reducing the time spent connecting Kenya's two biggest cities by half, from 10 hours to five. The distance travelled is 480 kilometers.
An estimated 1.3 million Kenyans have commuted between Nairobi and Mombasa by the SGR train since its launch one year ago, according to statistics released by Kenya Railways Corporation.
Meanwhile, about forty-five has thousand 20-feet equivalent units of cargo has been transported by the SGR cargo service since December 1, 2017, sparing entrepreneurs a colossal amount of money compared to road transportation.
Embodiment of partnership
The China-funded modern railway is estimated to have boosted the African country's GDP by 1.5 percent and provided 46,000 jobs to locals. About 300 domestic enterprises were sub-contracted during its construction, according to official figures.
Chen Yun, vice president of China Communications Construction Company (CCCC), the SGR contractor, said at the anniversary event that the project has been an integral part of Kenya's socio-economic transformation to benefit ordinary citizens.
The Madaraka Express also saw the advent of the nation's first batch of modern railway talent, including locomotive drivers. "Up to now, the SGR operation business has trained 1,600 Kenyan railway professionals," Chen said.
The launch of the modern railway revitalized China-Kenya relations, serving as an embodiment of Beijing's true partnership with East Africa's largest economy.
A survey conducted by a leading polling firm Ipsos in April revealed that China has become the most favored development partner of Kenyans thanks to Beijing's robust involvement in their country's economic development.
Raphael Tuju, secretary general of the ruling Jubilee Party, said in a recent interview with Xinhua that Kenya and other African countries regard China as a strategic partner in their quest to boost trade and infrastructure development.
"If you ask any Kenyan about China, the first thing that crosses their mind is the standard gauge railway linking Mombasa and Nairobi, and Guangzhou, where Kenyans go to buy clothes and other items," said Tuju.
Deepening integration
Kenya's budding entrepreneurs agree that the SGR has not only promoted China's image in the country but has also been instrumental in transforming regional commerce.
Shadrack Kimeu, a 30-year-old owner of a hardware shop, said that his revenue streams have expanded thanks to faster, cheaper, and more efficient means of transporting construction materials guaranteed by the SGR.
In a speech read on his behalf by Managing Director of Kenya Railways Corporation Atanas Maina on June 4, Macharia said that the Madaraka Express has brought huge benefits to critical sectors of the economy such as manufacturing and tourism besides enhancing technology transfer.