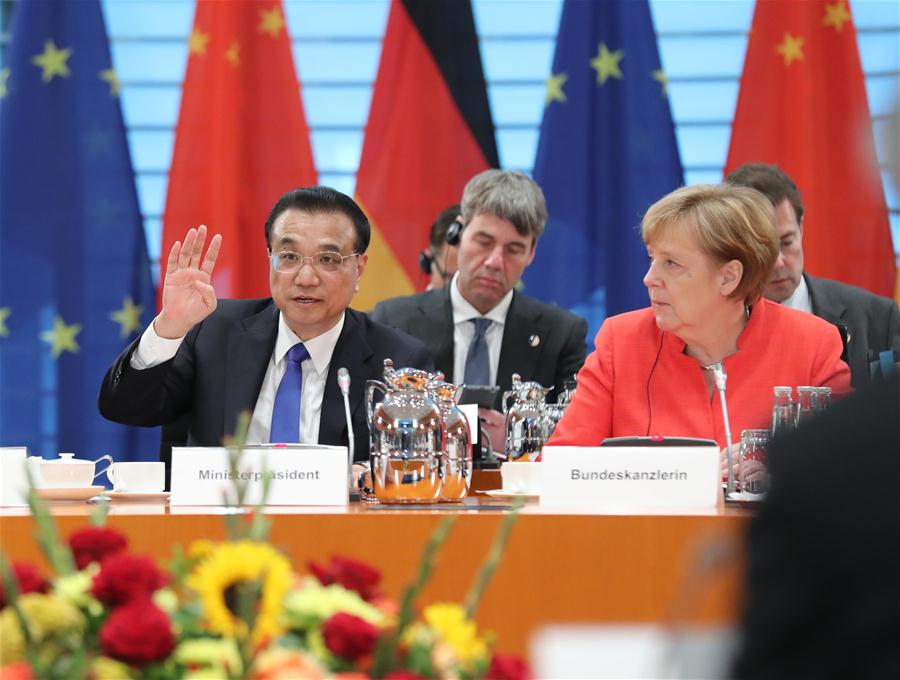 Chinese Premier Li Keqiang and German Chancellor Angela Merkel co-chaired the fifth round of intergovernmental consultations and made the announcement in Berlin.

Both sides agreed to deepen cooperation in finance and economy, make full use of high-level financial dialogue and other mechanisms, strengthen communication in macroeconomic policy and build financing platforms concerning bilateral and third-party markets.

While Germany appreciates China's further measures to open its financial market, China supports the construction of Frankfurt financial center and the offshore market of renminbi.

The two countries agreed to promote bilateral cooperation in economy, trade and investment, jointly safeguard free trade and an international market based on fair and recognized rules and relax market access.

China is willing to discuss with the German side to jointly explore the third-party market, and Germany is willing to give full play to its advantages to work with China in Industry 4.0.

The two governments agreed that they should build a cooperation platform for companies of both countries and create a more favorable business environment.

The two sides noted that they should go with the trend of the times, give full play to their industrial complementarities, and strengthen cooperation in emerging industries such as digitization, autonomous driving, artificial intelligence and new energy vehicle.

They agreed to strengthen cooperation on scientific and technological innovation as well as cooperation on agriculture by fully taping the potential of digitization.

Moreover, the two countries pledged to make joint contributions for tackling global challenges by stepping up cooperation in fields such as environmental governance, energy saving, biodiversity conservation and dealing with climate change.

The two countries also agreed to expand people-to-people exchanges and deal with the issues concerning the aging of population.

This round of intergovernmental consultations is the first of its kind since the two countries' new cabinets took office in March, said the Chinese premier, adding that it is of great importance to promote and make plan for the all-round cooperation between China and Germany.

Noting that at this year's annual meeting of the Boao Forum for Asia, Chinese President Xi Jinping gave a firm signal that China will expand its opening to the outside world, Li said China would like to continue to share with Germany the enormous dividends brought by its new round of opening up.

China treats both Chinese and foreign companies in its territory equally and will increase the protection of intellectual property rights, said Li.

He also expressed his hope that German market will remain open to Chinese companies and create a friendly and fair business environment for them.

Germany and China enjoy close and extensive cooperation, said the German chancellor, noting that more than 70 dialogue mechanisms between two countries fully indicate the depth and breadth of the bilateral cooperation.

Under the current international situation, said Merkel, Germany is ready to work with China to strengthen openness and cooperation and send the world a firm signal that both sides will continuously safeguard multilateralism and facilitate international cooperation.

She also noted that China and Germany will sign a memorandum of understanding on the cooperation of autopilot, which is a milestone for the two sides' cooperation in automobile industry.

After the consultations, Li and Merkel jointly witnessed the signing of a series of bilateral cooperation documents in areas such as agriculture, education, health care, chemical industry, telecommunication, automobile industry as well as autopilot.

Also on Monday, Li and Merkel met the press and introduced the achievements of their intergovernmental consultations.

This round of intergovernmental consultations has fruitful cooperation in various fields and open up new cooperation for the future, Li said.

In the process of its new round of opening-up, China will continue to optimize market environment and strengthen the protection of intellectual property rights, Li said.

Li said both sides should have a more open and confident attitude to deal with technical cooperation.

He also called on China and Germany use their substantial cooperation to show that they are committed to safeguarding multilateralism and free trade so as to promote their own development, as well as the recovery of world economy.

Li said 16+1 cooperation is a platform jointly established by China and the Central and Eastern European countries (CEEC), and it is also an important component of and a positive supplement to China-Europe relations.

He said the 16+1 cooperation covers some EU member states and non members.

For the CEEC in the EU, 16+1 cooperation can help them to develop their economy and increase the average development level of the EU, Li said.

For the CEEC that are not EU members, 16+1 cooperation can help them narrow the development gap and meet the standards to join the EU, Li said.

Li noted that the just-concluded leaders' meeting proposed to establish a center in Sofia, saying that the center aims to help businesses of all parties to learn about the laws in China, CEEC and EU, and introduce the 16+1 cooperation principles that feature in openness, equality, fairness and transparency so as to promote the opening up and prosperity of China, the CEEC and the EU.