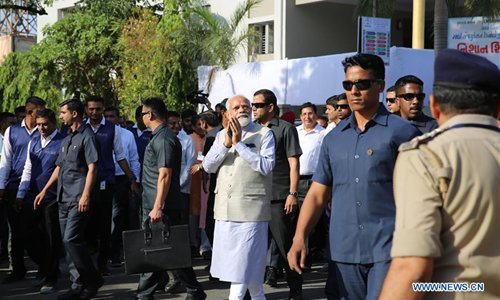 Indian Prime Minister Narendra Modi (C) gestures after casting his vote at a polling station in Ahmedabad city of India's western state Gujarat on April 23, 2019. Indian Prime Minister Narendra Modi cast his vote in Ahmedabad city on Tuesday, which saw the third phase of the ongoing parliamentary elections. The third phase of the polling of votes in India's 17th general elections is the biggest among all the seven phases. The first two phases took place on April 11 and April 18 respectively, while the last phase is slated to be held on May 19 and results to be announced on May 23. (Photo: Xinhua)

India's Prime Minister Narendra Modi is likely to be re-elected based on exit polls released on Sunday at the end of the 2019 Indian general election, and China-India relations will continue to develop in a healthy way no matter who wins, analysts said.The six-week-long election held from April 11 to Sunday is the world's biggest one with 900 million eligible voters, and the votes will be counted on Thursday, AFP reported.The parliamentary elections pitted Modi's right-wing Bharatiya Janata Party (BJP) and the main opposition Indian National Congress Party. At least four exit polls have predicated a clear majority for the BJP-led National Democratic Alliance (NDA) with about 300 seats of the 542-seat Lok Sabha, the lower house of parliament. The opposition party-led United Progressive Alliance was projected to win between 128 to 132 seats, Al Jazeera news channel reported on Sunday.Modi addressed his last rally Friday in Khargone, India, saying that the 2019 election was different from previous ones, and that the Indian people were voting to build a New India, The Times of India reported on Friday.No matter who wins the election, relations between China and India will not be affected and will continue on a good track. China and India have already established a confidence-building mechanism since last year, Zhou Gang, former Chinese ambassador to India, told the Global Times on Monday.Chinese President Xi Jinping met with Modi at an informal summit in Wuhan, Central China's Hubei Province on April 27 and 28 last year. Both sides reached a broad consensus on the overarching, long-term and strategic issues of global and bilateral importance."China and India have a lot in common on economic development, regional security, artificial intelligence, health care and international affairs," said Zhou. The two countries agree that the healthy development of bilateral relations benefits both sides.Chinese Ministry of Commerce said that the China-India trade rose 13.2 percent year-on-year to $95.54 billion in 2018, which surged by 13.2 percent on a yearly basis. China also cut tariffs on Indian agricultural products, potentially opening its market wider to Indian exporters. The ongoing China-US trade war and constantly deepening India-US relations added several unstable factors in future China-India relations, Ma Jiali, a senior research fellow at the China Institute of Contemporary International Relations, told the Global Times.US Navy chief Admiral John Richardson visited India from May 12 to 14 to discuss operations and exercises, training interactions, information exchanges, capacity building and capability enhancement. "However, the growing US presence would have limited influence on overall China-India relations. India has an independent foreign policy, and a trade war would affect India's economy as well," Ma noted.As for regional security, China will continue playing a mediating role in India-Pakistan relations, Ma said. China highly values its relations with both India and Pakistan. China will keep furthering its relations with Pakistan, and also attach great importance to India's concerns, Ma said.