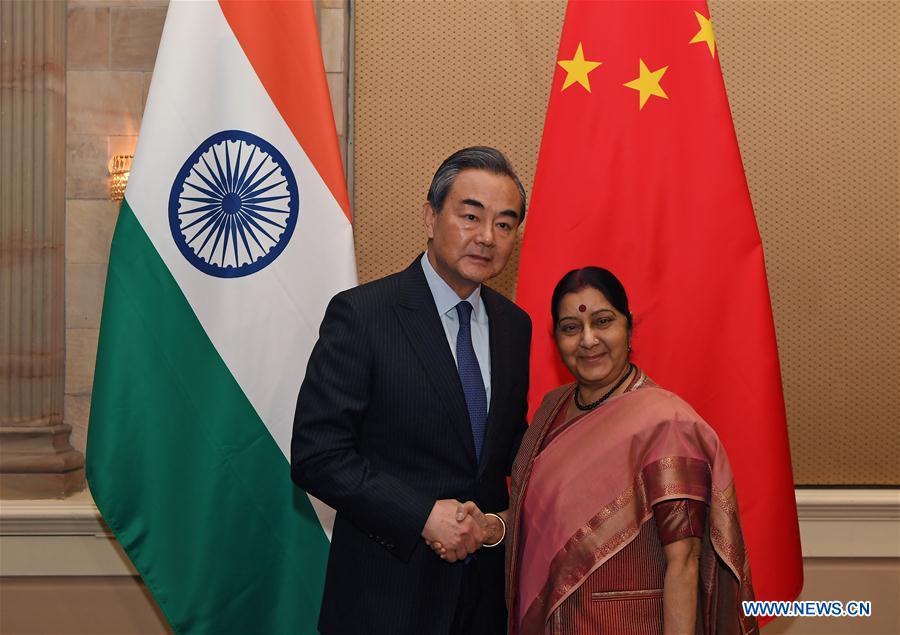 PRETORIA - China and India working together will accelerate the common development of the two countries, benefit the entire world, and contribute to the progress of human civilization, Chinese State Councilor and Foreign Minister Wang Yi said here Monday.

Wang made the remarks during a meeting with Indian External Affairs Minister Sushma Swaraj on the sidelines of the Formal Meeting of the BRICS Ministers of Foreign Affairs in the South African city.

China and India have extensive common interests, and they have far more consensus than differences, Wang said.

The two sides should take bilateral relations and people's fundamental interests as a starting point at all times, properly handle problems and differences, and prevent the interests of one party from affecting the overall interest, Wang said.

The two sides should earnestly safeguard peace and tranquility in the border areas in accordance with the consensus reached by their leaders and avoid taking actions that might complicate and aggravate the situation, Wang said.

China and India should strengthen coordination and play a constructive role in promoting the development of BRICS cooperation, Shanghai Cooperation Organization and other multilateral mechanisms, he said.

Swaraj said the informal Wuhan meeting between the leaders of India and China enhanced mutual trust between the two countries, strengthened cooperation, made the parties more comfortable with each other and achieved unprecedented success.

Swaraj said India will firmly adhere to the one-China policy and properly handle issues involving the core interests of China, such as Taiwan- and Tibet-related issues.

India and China, as the two largest emerging markets and developing countries, share a common position in safeguarding the international political and economic order and promoting the improvement of global governance, Swaraj said.

The two sides should further strengthen coordination and cooperation within multilateral mechanisms and contribute to preserving the common interests of developing countries, she said.