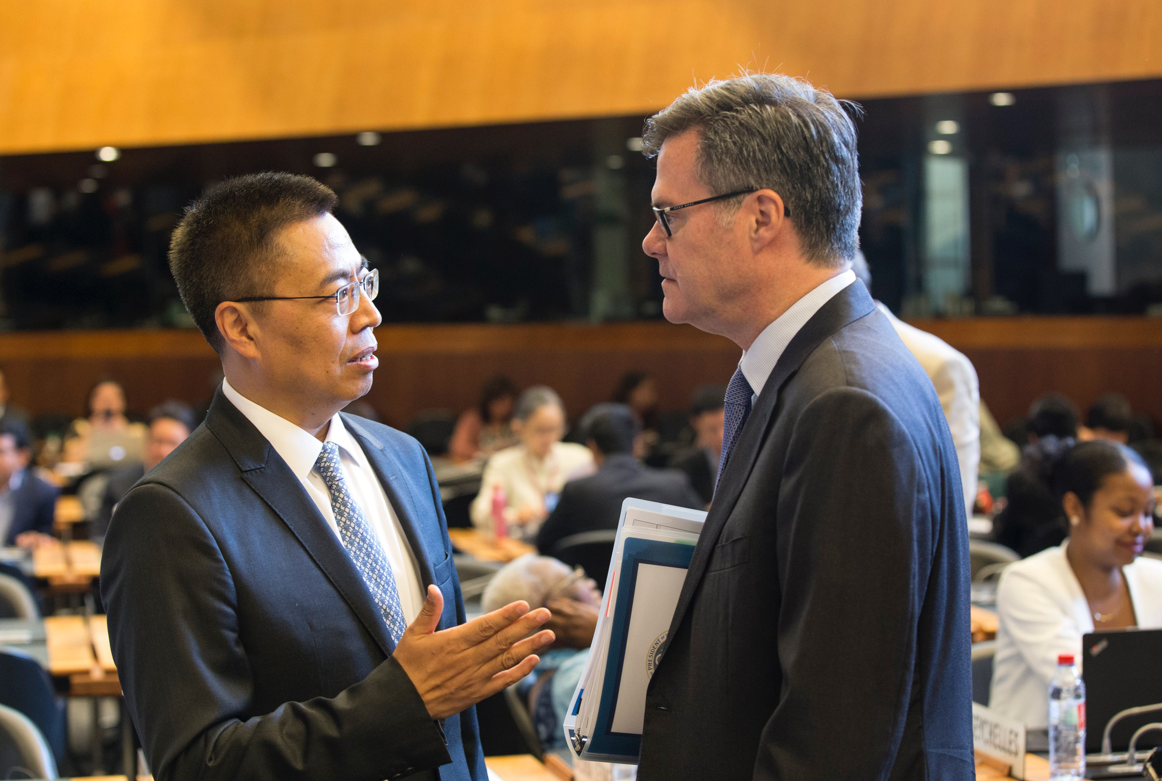 Geneva (People’s Daily) - The General Council of the World Trade Organization commenced its third meeting of the year in Geneva on Thursday. The US permanent representative to the WTO, Ambassador Dennis Shea, criticized China’s economic model on the basis of documents submitted by the US before the meeting. Ambassador Zhang Xiangchen, China’s permanent representative to the WTO, responded comprehensively and resolutely refuted the accusations.

The General Council is the WTO’s highest-level decision-making body in Geneva, meeting regularly to carry out the functions of the WTO. It has representatives (usually ambassadors or equivalent) from all member governments and has the authority to act on behalf of the ministerial conference which meets roughly every two years.

The two-day general council meeting has a total of 10 items on the agenda, the sixth of which is to discuss a paper entitled “China’s trade-disruptive economic model,” submitted to the WTO by the US before the meeting. In a speech at the meeting Shea elaborated on the paper, saying, "In the paper that we submitted for today’s meeting, we focus on China’s economic model, which has proven to be particularly trade disruptive.”

In a subsequent half-hour speech, Zhang not only responded to the remarks of the US representative, but also made a legal evaluation of the US paper. He said in his remarks, Dennis referred to the “non-market nature of China’s economy.” Zhang said, “However, we can't find the definition of ‘market economy’ throughout the WTO rule book. There is no one-size-fits-all ‘market economy’ standard in the world. The WTO rules never authorize any member to use its own economic model as the template of a ‘market economy’, and to accuse any other member who would not copy it as a ‘non-market economy’.” 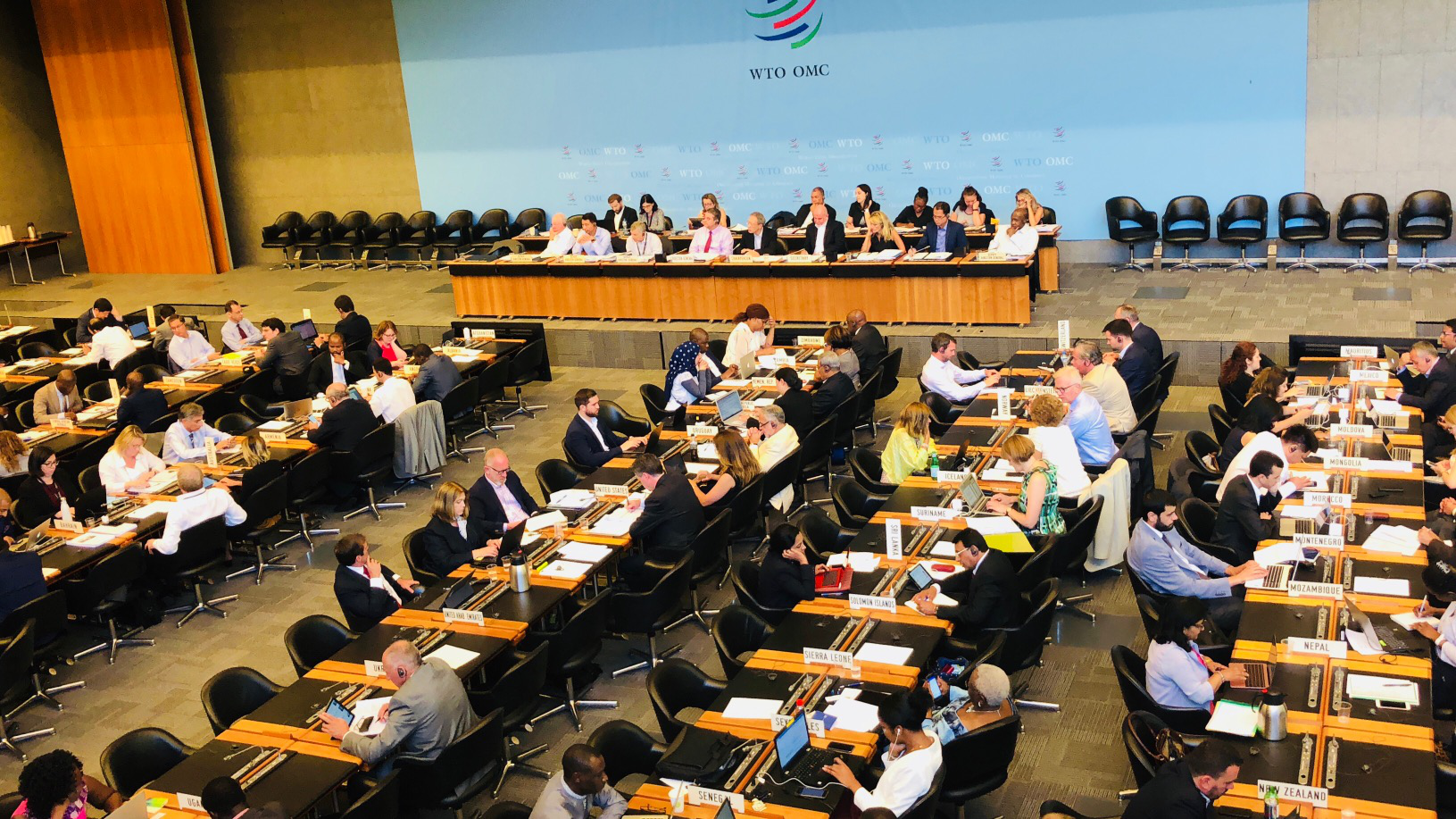 The General Council of the World Trade Organization commenced its third meeting of the year in Geneva on July 26. (Photo: Ren Yan)

“If there is any relevance in the topic of ‘non-market economy’, it reminds us once again that there are certain members, including the US, who, disregarding the WTO rules and their own commitments, are still using the notorious ‘surrogate country’ methodology in anti-dumping investigations according to the ‘market economy’ standards of their domestic laws. I would like to take this opportunity to urge these members once again, ‘pacta sunt servanda’. Please honor your commitments 17 years ago,” China’s envoy said.

“If a paper has flaws in its footnotes, then its evidence may be called into question and its arguments will be put into doubt. Paragraph 1.3 of the paper says that China limits the power of the market and cites in its footnote China’s Property Law as a source. But the fact is that the Property Law clearly says that China ‘encourages, supports and guides the development of the non-public economy.’ In the eyes of the US, the very words ‘encourage, support and guide’ could be misread as ‘suppress, limit and intervene’.”

Section 3A of the paper refers to the “non-reciprocal and protected market” of China. But one particularity about this section is that it has not a single footnote. “I presume it is difficult to find evidence that can support this argument. However, if we reverse the argument, we can find plenty of evidence. Let me just offer some,” Zhang said. “In 2017, China’s contribution to the growth of the world economy was 34 percent. China is the largest trading partner for over 120 countries and regions. There is plenty more evidence in the white paper on China and the World Trade Organization that China recently submitted to the General Council in the document 19WT/GC/W/749.”

“The 2013 Report to Congress of the US-China Economic and Security Review Commission co-signed by Ambassador Shea stated that ‘growing demand from China has supported American exports in certain sectors of the US economy, such as aerospace, the auto industry and agricultural products’. If China had been a ‘non-reciprocal and protected market’, how did those US products enter the Chinese market?” asked Zhang.

“The United States is demonizing China and attacking its economic model to divert attention from itself, but China will never bow to US efforts to tie its hands with a new set of trade rules,” Zhang said to the People’s Daily. “At the present moment, the paramount task for the WTO is to curb the spread of unilateralism and protectionism, to bring the dispute settlement mechanism to its full function and to stop the trade war. We should not waste our time finding scapegoats or look away from these fundamental challenges. China is not America’s scapegoat.”