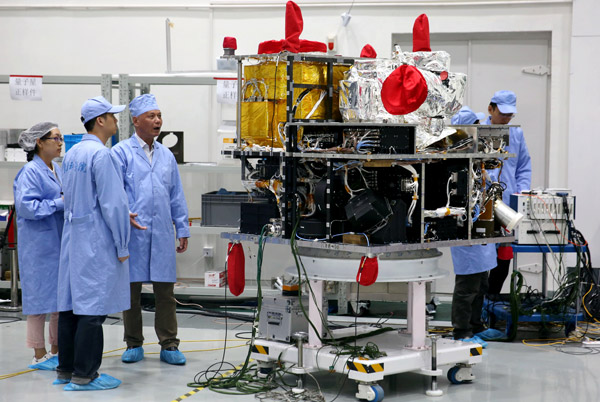 Scientists work on China's first quantum science satellite at a research center of the Chinese Academy of Sciences in Shanghai in May last year. (Photo: Xinhua)

China and Italy are preparing for the world's third intercontinental quantum communication test as early as September, allowing scientists to have a better understanding of this hackproof technology's applications across great distances in space.

Pan Jianwei, chief scientist for China's quantum-science satellite, which goes by the nickname "Micius", revealed the news on the sidelines of the 8th International Conference on Quantum Cryptography in Shanghai on Monday.

The test will be conducted using several ground stations in China and Italy's Space Geodesy Centre in Matera - a distance of more than 8,000 kilometers.

"We had a successful quantum communication with Austria last year, and with Tenerife in the Canary Islands off the coast of northwestern Africa earlier this year," Pan said. "Next will be with Italy in September or October."

"We are open to working with teams in other countries, and to sharing our experiences in quantum communication," he said, adding that cooperation with Japan and the United States is under discussion.

The China-Italy intercontinental communication test will be conducted through Micius, the world's first and only operating quantum communication satellite. It allows quantum keys and encrypted messages to be sent and received.

Launched in August 2016, Micius was designed with a service life of 2 years, but it is still functioning well, project experts said.

Paolo Villoresi, Italian professor of physics at University of Padua, confirmed the collaboration and said the test will help scientists better understand how quantum communication works in space.

"We didn't have an active signal source in space for our experiments before China sent Micius," he said.

In July, two Chinese scientists on Pan's team went to Italy to help their counterparts track Micius and learn its parameters for the upcoming test.

"We are really looking forward to the collaboration and to gathering interesting results," Villoresi added.

One of the featured applications of quantum communication lies in quantum cryptography, which enables security through quantum key distribution technology.

Quantum communication is regarded as the most secure because its encryption is based on quantum entanglement, in which two or more subatomic particles affect each other simultaneously, regardless of the distance between them.

At the same time, the particles cannot be destroyed or duplicated. Any eavesdropper will disrupt the entanglement and alert the authorities.

This year's quantum cryptography conference has drawn some 500 leading scholars and experts from home and abroad in the field of quantum communication and cryptography. It's the first time China has hosted this conference.

The 2,000-km Beijing-Shanghai main quantum fiber link was put into service in September, and 32 local quantum node stations along the link have been built.

Micius was integrated into the network last year, creating the world's first integrated quantum network capable of sending messages via landlines and from space.

Zhao Bo, manager of applied product department of QuantumCTek, one of China's main manufacturers of quantum key distribution devices, said their clients include IT companies, banks and governments.

"Quantum cryptography technology can improve the security of communications, which is becoming more and more crucial in this digital world," Zhang said.