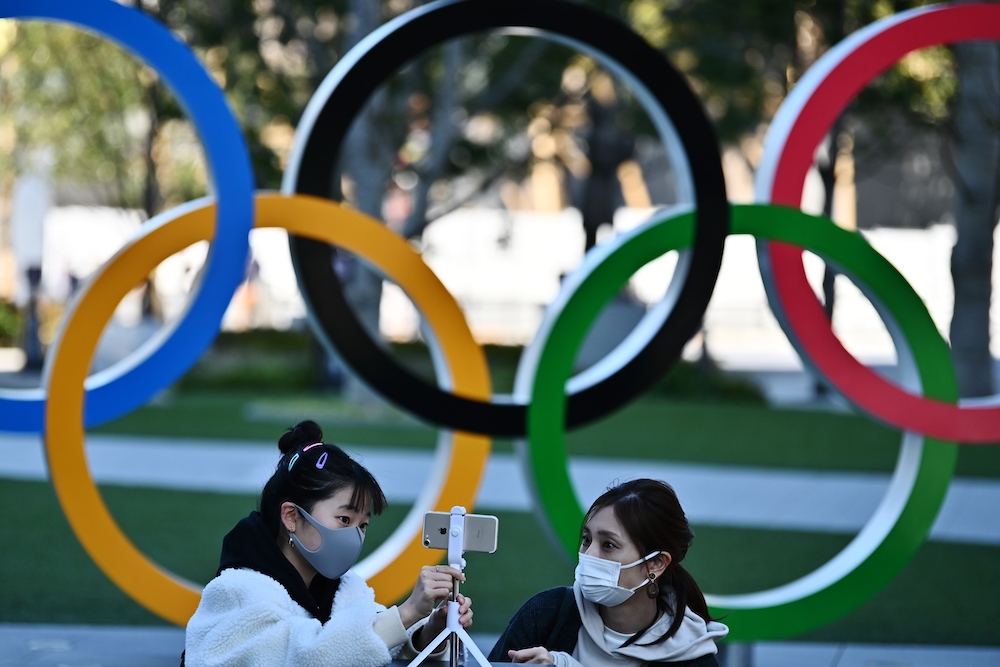 Mask-clad people pose with an installation of the Olympic rings in Tokyo on February 28, 2020. (Photo: AFP)

TOKYO, Feb. 29 (Xinhua) -- The eighth China-Japan high-level political dialogue was co-chaired in Tokyo on Friday by Yang Jiechi, a member of the Political Bureau of the Communist Party of China (CPC) Central Committee and director of the Office of the Foreign Affairs Commission of the CPC Central Committee, and head of Japan's national security council Shigeru Kitamura.

The two sides had an in-depth exchange of views on preparations for Chinese President Xi Jinping's upcoming visit to Japan and agreed to take the implementation of important consensus as an opportunity to make use of the China-Japan high-level political dialogue mechanism, enhance political mutual trust, strengthen communication and coordination, further consolidate the improving momentum in bilateral relations and promote China-Japan relations in a new era onto a new level.

Yang said that under the personal command and deployment of Xi, the prevention and control of the outbreak of the novel coronavirus (COVID-19) in China has made initial achievements, while the positive momentum is expanding, and the economic and social development is accelerating the recovery.

Yang said that China will coordinate on the prevention and control of the epidemic with economic and social development, ensuring the fulfillment of the major goals set for this year to secure a decisive victory in building a moderately prosperous society in all respects and win the decisive battle against poverty.

He said the fight against the disease is vital to the safety of all peoples. It is of vital importance to strengthen global public health security governance and enhance international coordination and cooperation.

Yang said solidarity and cooperation are the most powerful weapons in face of the epidemic. China is ready to maintain close communication with relevant countries including Japan, the World Health Organization and the international community to share experience in epidemic prevention, coordinate prevention and control measures and better safeguard the health and well-being of all.

Kitamura spoke highly of China's resolute and powerful measures to combat the epidemic and the remarkable results achieved, saying that China's experience in fighting the epidemic has served as a positive example for Japan.

The two sides also agreed to strengthen cooperation in scientific and technological innovation and third-party markets cooperation, and create favorable business environments for each other's companies to invest and operate.