WORLD China, Japan, South Korea: Together toward a post-pandemic era

China, Japan, South Korea: Together toward a post-pandemic era 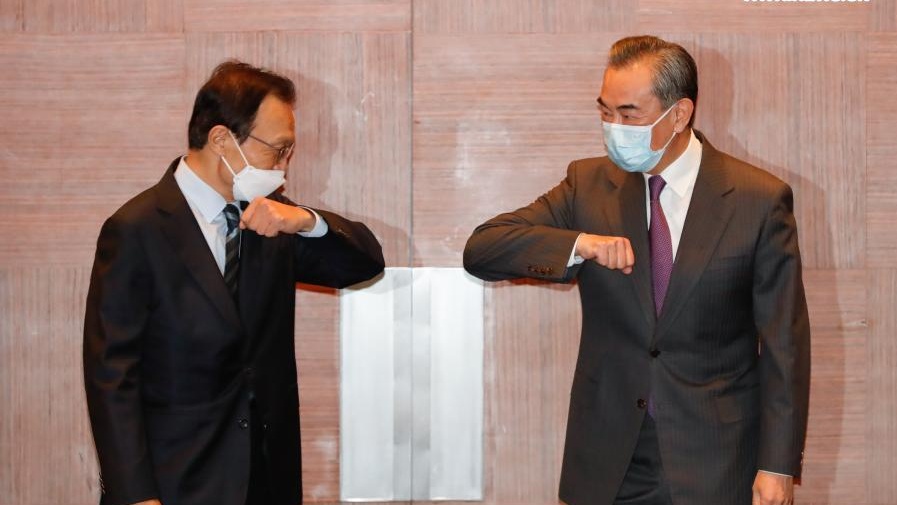 Overcoming the chilly winds of the early winter and the havoc of the novel coronavirus pandemic, Chinese State Councilor and Foreign Minister Wang Yi’s visit to Japan and South Korea brings warmth of peace and cooperation to Northeast Asia and the world.

The 2020s are definitely not off to a good start for humans, but things are not that bad for trilateral cooperation among China, Japan and South Korea.

Sailing against the headwinds of anti-globalization, the cooperation among China, Japan and South Korea has made tremendous progress. The year 2019 marking the 20th anniversary of trilateral cooperation witnessed the Chengdu Trilateral Summit, where leaders of the three countries declared a continuation to enhancing cooperation in multiple areas. And when the COVID-19 pandemic hit the world, the cooperation of our three countries has been the mainstay in keeping human lives safe from the virus and promoting the recovery of the devastated global economy. The three countries are the first to open or plan to open a "fast track" for business travelers among each other, and they are the main driving force in the process of signing of the Regional Comprehensive Economic Partnership (RCEP). Now, with the successful completion of Wang's visit, the trilateral relationships among China, Japan and South Korea are expected to ascend to a new level. It is safe to say that while the whole world is forced to learn surviving and coexisting with the virus in the "co-pandemic era", China, Japan and South Korea will be among the first echelon holding hands to transition from the "co-pandemic era" to the "post-pandemic era".

Former US Secretary of State Henry A. Kissinger holds the view that "the coronavirus pandemic will forever alter the world order" and "walled cities will be revived again". Indeed, the world has witnessed the global chaos caused by the pandemic and the intensifying rivalry among major powers. It seems that Kissinger’s prophecy may come true. However, from the perspective of China, Japan and South Korea, the COVID-19 pandemic is definitely a game-changing event which will have a permanent irreversible impact on the regional order, but it also may be a chance to tear down the already long-existing walls among them.

'The hedgehog effect dilemma' during winter of pandemic

The COVID-19 pandemic is like a magic mirror which reveals the true feature of the China-Japan-South Korea trilateral relationship. Our three countries are like three hedgehogs — the chilly winter of the pandemic forcing us to get closer, seeking warmth from each other, but the existing "spines" -- such as miserable war memories and territorial disputes -- force us to keep a "social distance".

On the one hand, the outbreak of the epidemic has made the three countries fully aware of the depth of their close relations. Facing the pandemic, our three countries showed astonishing passion for helping each other out of the crisis—first was Japan and South Korea helping China, followed by the reciprocity of China toward South Korea and Japan. In the process of mutual aid, the cultural bond among these three countries aroused a deep sense of common identity, and the poetry printed on supply boxes turned into much-told stories.

On the other hand, the NIMBY (not in my backyard) phenomenon compounded by the tangled and conflicted reality became the cacophony holding back deeper trilateral cooperation. These three countries had to deal with the domestic pressure demanding border entry rejection from the other two countries. The existing territorial disputes and trade conflicts also undermined mutual trust. Meanwhile, the pandemic has ravaged the interdependent economic ties among all three countries, which makes many people think of a decoupling future to cut the potential loss.

This "hedgehog effect" of China, South Korea and Japan trilateral relations during the pandemic revealed a simple truth that all three countries have to admit: Confronting a global disaster cooperatively will benefit all, while current "social distancing" rooted in existing conflicts would prevent us from seeing the big picture. And this is the dilemma we are committed to overcome.

Wang Yi’s Japan and South Korea visits sent a clear message that China is determined to overcome the "spines" preventing our three countries to move closer into olive branches connecting us together. As Churchill noted, "Never waste a good crisis". During the tumultuous "co-pandemic era", there is a way forward for China, Japan and South Korea to come toward the "post-pandemic era" cooperatively.

First, our three countries should attach great importance to the unbreakable cultural bond. We may have different ideologies or political systems, but the cultural bonds are deeper and more permanent in that they can override political differences.

Second, our three countries should break the "crisis-response" cooperation model. To minimize the loss, we should be at least one step ahead of the tragedy to conduct cooperation. Besides the domain of public health, marine governance and environmental protection are also potential fields where crisis awaits joint efforts from our three countries.

Fourth, the three countries should accelerate the China-Japan-ROK FTA process. In the post-pandemic era, only by responding to the increasing protectionism jointly can our three countries secure a better future.

In the upcoming and more divided post-pandemic world, only by finding a way toward a more stable and more consolidated Northeast Asia will we have a better future forregional development. And China, South Korea and Japan must fight for it.