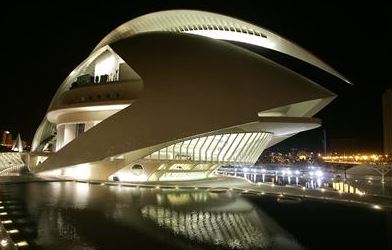 The City of Arts and Sciences in Valencia, Spain, shines in the night scene on September 7, 2018.(Photo: Xinhua)

Casa Asia is a Spanish organization dedicated to promote cultural exchange between Spain and Asia.

Navarro made this statement at the 5th European Forum on the Chinese Development Model held in the Spanish city of Valencia where he hosted a delegation of members of the Chinese Academy of Social Sciences (CASS).

Together with experts and Spanish professors, they discussed the relations between the Asian country and Europe.

Spanish experts such as Enrique Fanjul, Commercial Counselor of Spain in China, attended the event and highlighted five points during his speech based on the contractual situation of China and the EU.

He stressed that the rise of China is beneficial to the world because of the "great coincidence of interests" in the Asian country and the EU. He encouraged the authorities of both parties to think of Eurasia as a large region.

Deng Chundong, president of the Academy of Marxism of the CASS, said at the opening of the forum that "the relationship should be more fluid."

He also insisted on betting on globalizing strategies, at a moment when protectionism advances.

Vicente Andreu, director of the Confucius Institute of the University of Valencia, focused on the importance of cultural exchange through languages, Spanish and Chinese.

"They help discover a culture better," he assured.

Therefore, he encouraged companies and authorities to launch projects that bring the Spanish language to China and vice versa.

Tourism was also a main topic at the event, as Chinese tourism represents a big opportunity for Europe, especially, for Spain.

Chinese tourists made 130 million overseas trips in 2017, with total spending amounting to 115 billion U.S. dollars, according to a report jointly released by China Tourism Academy and online travel agency Ctrip.

"This makes it one of the most dynamic economic sectors," Andrea Pappier, secretary of the Confucius Institute of the National University of La Plata in Argentina, explained in a presentation.

2018 was declared the year of the Chinese tourism in the EU. Europe is the world's leading tourism destination.

The event was held in the context of the 40th anniversary of the reform and opening up of China, the 45th anniversary of the establishment of diplomatic relations between Spain and China and before the China International Import Expo (CIIE) in Shanghai from November 5 to 10.

"It is the perfect time to boost our openness at a higher level," said Yuan Hongying, vice president and researcher at Shandong Academy of Social Sciences.