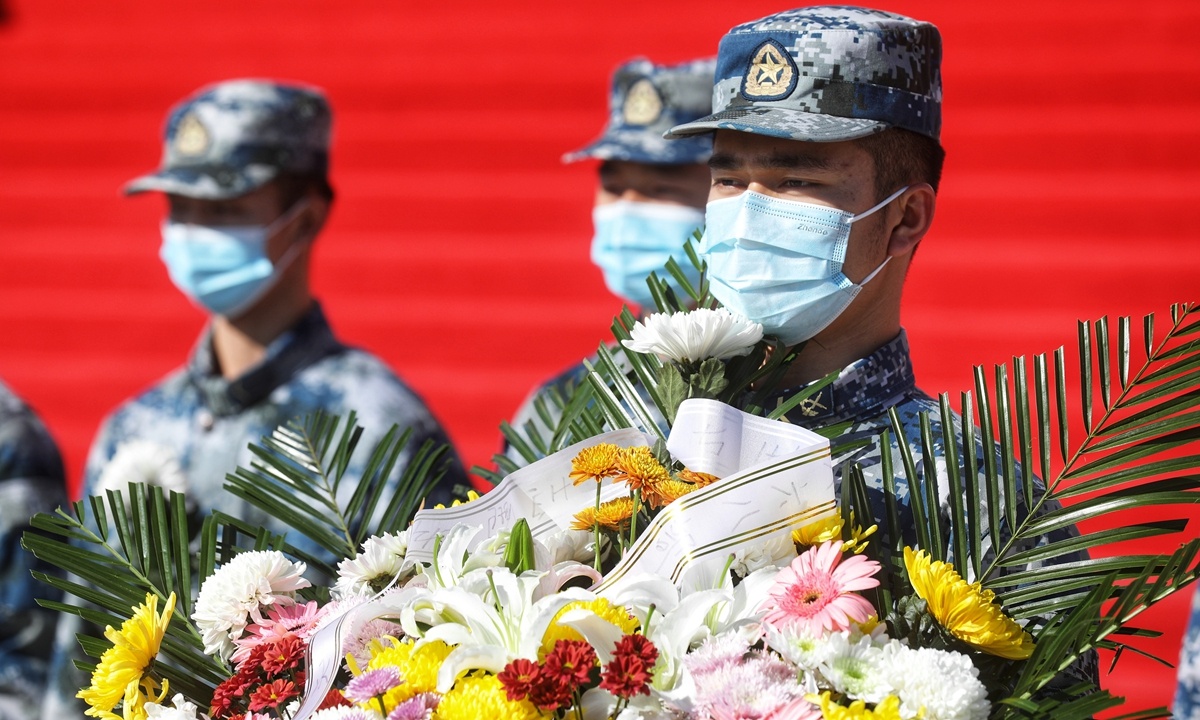 PLA Air Force soldiers stationed in Dandong, a Chinese city bordering North Korea, present flowers at a memorial hall on Fri as China commemorates the 70th anniversary of the Chinese People's Volunteers army entering the DPRK for the War to Resist US Aggression and Aid Korea.(Photo: agencies)

Chinese President Xi Jinping spoke at a meeting in Beijing to commemorate the 70th anniversary of the Chinese People's Volunteers army entering the Democratic People's Republic of Korea in the War to Resist US Aggression and Aid Korea (1950-53).

His remarks have refreshed the Chinese people and sent an important message to the world. The Chinese people cherish peace and desire stability, but they will never sit idly by while China's sovereignty, security and development interests are undermined, and if such a situation arises, they will certainly deal with them head-on. Xi also quoted late leader Mao Zedong's remarks as saying that the Chinese people cannot be trifled with; and it is not easy to stop them once they are riled up. Such remarks must have left a deep impression on forces which are attempting to threaten China's national interests.

China will not provoke, but it does not fear provocations. This is the philosophy of the Chinese people and the firm political philosophy of the country. During the early years of the founding of the People's Republic of China, US threats of China's security led to the War to Resist US Aggression and Aid Korea. Later, the Soviet Union pressured China by displaying nearly a million soldiers at the border, and the Chinese people did not fear, either. Now, the US is carrying out a containment strategy on China, and is flexing its muscles. We'd like to warn political elites in Washington: Please keep history in mind and do not go further on the wrong path of miscalculating China's national will.

The threat and suppression of the current US administration is all-round. It includes a technological blockade and setting up an anti-China alliance. The commemoration of the War to Resist US Aggression and Aid Korea gives the Chinese people the opportunity to look back on the path their country embarked on 70 years ago. At that time when the gap in strength was huge, the Chinese people did not hesitate but struck back and defeated imperialist invaders. Faced with the menace of a strong power, we have no reason to fear.

The Chinese people want peaceful development. But if external forces just want to make trouble and create crises for us, they are bound to experience the powerful national strength China has accumulated over the years.

That China loves peace is not an empty slogan. It will never take the initiative to make provocations deep into the Pacific or the Indian Ocean. The possible risk of a military clash lies around China's neighboring areas. Making provocations there touches upon China's core interests, which most likely riles up China.

China has territorial disputes with some of its neighboring countries. But China and these countries have shown their will to manage those frictions, which have reduced the possibility of conflicts. The bigger threat comes from the intervention of big powers from outside the region. A certain external power keeps driving a wedge, with its navy and air force intensifying activity, which adds uncertainty to the region.

In this region, there is a force that insanely coordinates external powers' strategic suppression of China - Taiwan's Democratic Progressive Party (DPP) authorities. They are exploited by external anti-China forces and make the Taiwan Straits the most prominent rivalry stage in the world. They also make themselves the focus of being crushed in the region.

There is no country in the world, except China, that has not been engaged in a war in more than 30 years. Some forces believe China is not capable in war, and fears war. They believe sending a warship to the Taiwan Straits could pressure China psychologically. Even the DPP authorities feel instigated. Such thinking and moves are self-conceited.

Some big countries indulge in a strange political logic - only powerful enemies could empower their political elites. These big countries should not practice such logic on China. China is big, stable, powerful and united. Confrontations with China will only create more problems than solutions for themselves. Certain forces surrounding China should also realize that they will only suffer misfortune and meet a dead end if they desperately follow external powers in disturbing China.