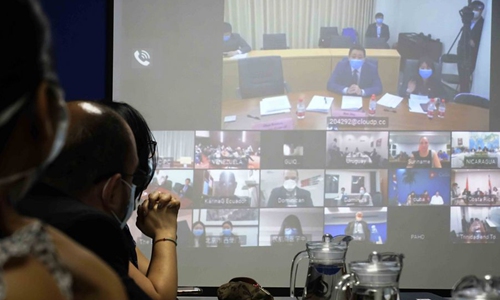 Photo taken on March 23, 2020 shows the venue of an online meeting on COVID-19 epidemic prevention and control among representatives from China and Latin American and Caribbean countries in San Salvador, El Salvador.(Photo: Xinhua)

As Latin America's economic woes deepen, China may scale back direct lending to the region to minimize credit risks, Chinese experts said, but the long-term infrastructure projects will likely boost local economies after the Covid-19 outbreak is contained.
China has been rolling back lending to the region in recent years. According to a report compiled by the Global Development Policy Center, lending from China Development Bank and the Import-Export Bank stood at $11 billion in 2019, the lowest in a decade.
"China is cutting lending to the region due to economic uncertainties, especially as Brazil has emerged from a recession a few years ago," Sun Yanfeng, a research fellow at the Institute of Latin American Studies of the China Institutes of Contemporary International Relations, told the Global Times over the weekend.
"As COVID-19 is battering the region, the overall economic outlook is not rosy, so the pace at which China reduced credit lending will be faster," Sun said.
As of Saturday, Brazil's Covid-19 death toll had reached 28,834, with almost 500,000 infections confirmed.
However, Sun noted that the trend of cutting state-backed lending and diversifying investment in the local economy was in progress even before the hit of the pandemic, and many Chinese companies that are actively engaged in the local economy will give a boost to Latin America after the pandemic ends.
Apart from being one of Brazil's most important trade partners and its biggest export destination, China is also undertaking significant infrastructure projects in Brazil. According to the Xinhua News Agency, from 2003 to March 2019, China's investment in Brazil totaled $71.3 billion, the most of any country in the world.
State Grid Corp of China (SGCC) alone has invested $12.4 billion in the country, including electricity supply projects in major cities in Brazil such as Brasilia and Sao Paulo.
"Chinese companies' local involvement has evolved from just the construction of heavy infrastructure," Sun said. "They are now much more hands-on in the long-term operation of their business and are providing service directly to local customers."
SGCC's Brazilian clients experienced 27.8 percent fewer power cuts in 2018 because of the company's operations, according to a report by the Xinhua News Agency.
"Companies such as SGCC, as well as China Gezhouba Group, are building and operating environmentally friendly infrastructure projects there," Sun said, noting that these projects will help ensure the stable provision of energy and create jobs to boost the local economy after the pandemic ends.