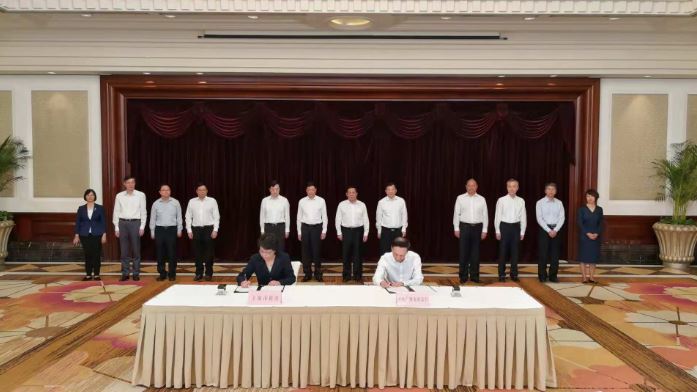 The launch was part of a strategic cooperation agreement signed between CMG and the city of Shanghai. President of the China Media Group Shen Haixiong, Secretary of the Shanghai Municipal Committee of the Communist Party of China Li Qiang, and the Mayor of Shanghai Ying Yong attended the event.

Shanghai is a pioneer city in China's reform and opening up. The strategic cooperation between China Media Group and Shanghai is helpful to make full use of the city's unique advantages, meanwhile, improve the leadership, communication and influence of China Media Group constantly.

China Media Group will take the Yangtze River Delta Regional Bureau and the Shanghai Bureau as the advance position, and contribute to Shanghai in the new era and build a modern socialist international metropolis.

The agreement will see CMG and the city of Shanghai establish a comprehensive and in-depth cooperation in major cultural projects, intellectual property management, as well as in industries such as sports, 4K technologies, and TV and film production.

The Yangtze River Delta, which encompasses the Shanghai municipality, Zhejiang, Jiangsu and Anhui provinces, is a major economic powerhouse in China. CMG says such a strategic cooperation will make full use of Shanghai and the surrounding region's unique resources, talents and geological advantages, and will contribute to the group's broadcasting capacities and international influence as a world-class mainstream media.

The agreement marks the first of its kind since CMG was inaugurated in Beijing April this year. The new broadcaster is a merger of state-owned China Central Television (CCTV), China Radio International (CRI) and China National Radio (CNR).