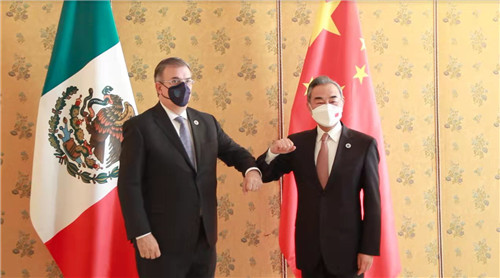 China is ready to take the 50th anniversary of the establishment of China-Mexico diplomatic relations next year as an opportunity to summarize successful experience, plan and envision cooperation in the next 50 years, Wang said.

Under the strategic guidance of the two heads of state, bilateral relations have maintained a good momentum of development, Wang said.

China and Mexico are both major developing countries and emerging economies with important influence, Wang said, adding that China stands ready to strengthen strategic coordination with Mexico under the United Nations and other multilateral frameworks to safeguard the common interests of developing countries as well as international fairness and justice.

For his part, Ebrard said that Mexico firmly adheres to the one-China policy and the principle of non-interference in others' internal affairs, and this position will not change.

Mexico is committed to strengthening bilateral relations and is willing to work with China to successfully celebrate the 50th anniversary of the establishment of bilateral diplomatic relations, Ebrard said.

Bilateral cooperation in the fight against the COVID-19 pandemic has been fruitful and Mexico thanks China for providing vaccines and assistance, and hopes that with the support of China, vaccines can be produced in Mexico to help regional countries respond more effectively to the pandemic, Ebrard said.

The two sides have carried out good cooperation in infrastructure and other fields, Ebrard said, adding that while consolidating traditional cooperation, it is also necessary to actively expand new areas of cooperation.

Moreover, Mexico is willing to strengthen coordination on multilateral affairs with China, attaches great importance to the Global Development Initiative proposed by President Xi, and will actively study it, Ebrard said, adding that Mexico welcomes China to join the Comprehensive and Progressive Agreement for Trans-Pacific Partnership.

The Chinese side is happy to see that Mexico plays an active role in the Community of Latin American and Caribbean States (CELAC), and is willing to strengthen coordination with Mexico and other Latin American countries, work together to build the China-CELAC Forum, create a platform for enhancing trust, expanding cooperation and promoting growth, so as to inject new momentum into the development of both sides, Wang said.