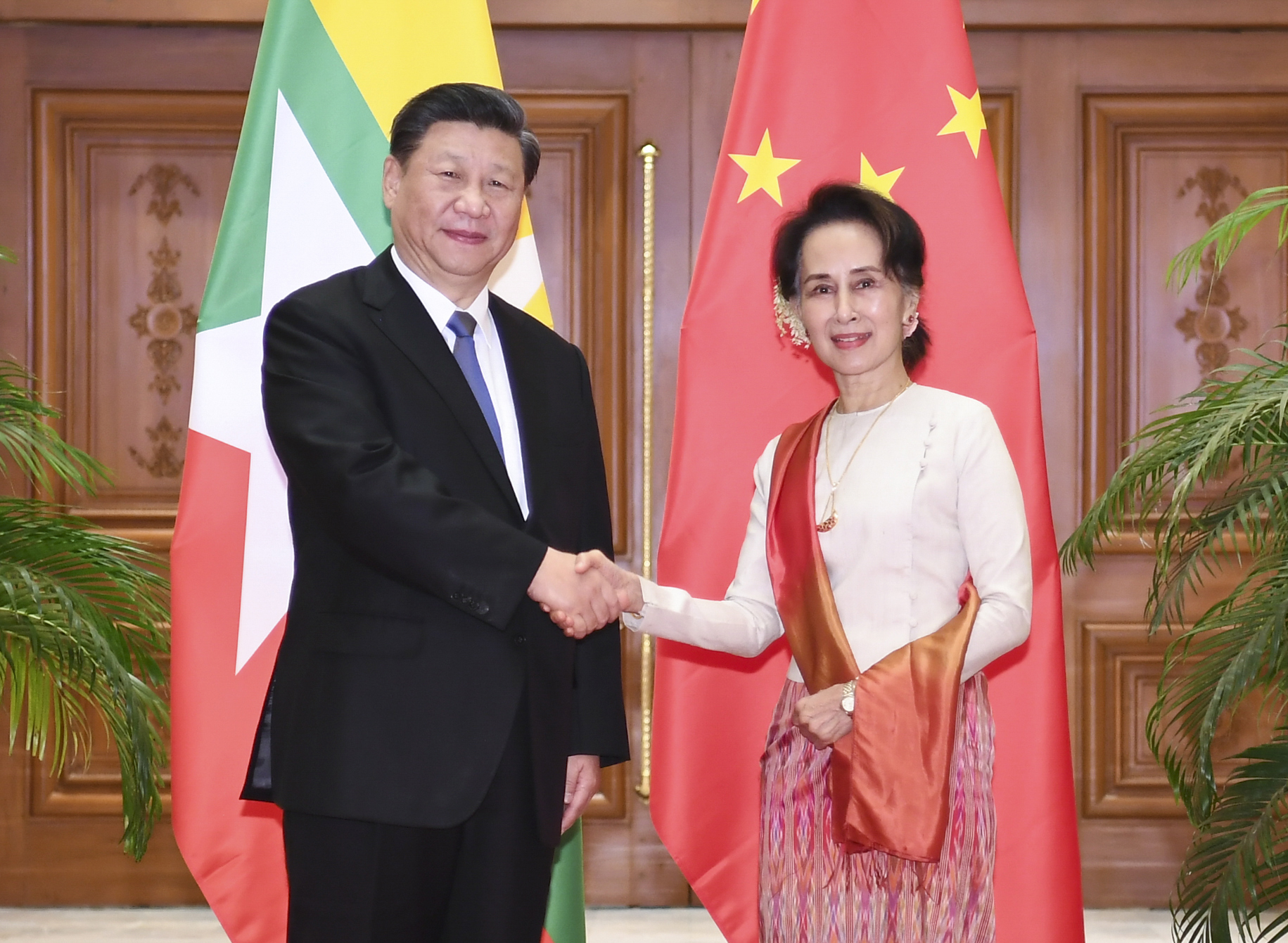 NAY PYI TAW, Jan. 18 (Xinhua) -- China and Myanmar have agreed to work together to build a community with a shared future, opening a new era of bilateral ties.

Xi said that enjoying a profound "Paukphaw" (fraternal) friendship, China and Myanmar face new development opportunities in bilateral ties as both countries have entered a new stage of national development.

This time, the two sides have decided to jointly build a China-Myanmar community with a shared future, ushering in a new era of bilateral relations, Xi said.

The president urged efforts to implement the decision, systematically plan and deploy next-phase exchanges and cooperation in various fields, and strengthen political guidance for bilateral relations, so as to push China-Myanmar relations to a higher level.

Firstly, Xi said, the two countries should accelerate the alignment of their development strategies and put more efforts into the construction of the China-Myanmar Economic Corridor (CMEC).

Stressing the overriding importance of the CMEC in their Belt and Road cooperation, Xi said the two sides have started the substantive construction of the CMEC, adding that the two sides should work to increase the sense of gain of both peoples, the Myanmar people especially, as soon as possible.

China and Myanmar have agreed to allow the Kyaukphyu projects to play a demonstrative and driving role in the CMEC, and accelerate the construction of the China-Myanmar Border Economic Cooperation Zone and the New Yangon City, so as to complete the overall layout of the economic corridor supported by the north, east and west ends.

The two sides should also forge ahead with connectivity projects including highways, railways and power grids, in order to form a structural network for the corridor, Xi said.

Thirdly, China and Myanmar should expand trade and investment and boost local cooperation, Xi said, adding that China has always adhered to upholding justice while pursuing shared interests in its practical cooperation with Myanmar.

China welcomes Myanmar to increase exports to China, supports Chinese enterprises in increasing investment in Myanmar and is willing to enhance bilateral financial cooperation, he said.

Xi encouraged the two sides to give full play to the geographical advantage of their economic corridor and promote exchanges and cooperation between Myanmar and Chinese provinces including Yunnan Province, so as to contribute to the overall development of the two countries.

Fourthly, China and Myanmar should deepen people-to-people and cultural exchanges and promote friendship and understanding between their peoples, Xi said.

He urged the two sides to make the celebration events for the 70th anniversary of bilateral diplomatic ties and the China-Myanmar Year of Culture and Tourism a success, and encourage more youths to carry out exchanges so as to pass on the "Paukphaw" friendship from generation to generation.

China and Myanmar should endeavor to improve people's livelihood, security and infrastructure construction along the CMEC, to deliver benefits to more Myanmar people as early as possible, he said.

Extending once again a warm welcome to Xi, Aung San Suu Kyi said Myanmar highly cherishes its friendship with China and hopes to continue to be a good friend of China.

Xi's visit, which has boasted milestone significance and yielded fruitful results, will greatly deepen the Myanmar-China "Paukphaw" friendship and promote their practical cooperation, she said.

The Myanmar side is ready to actively advance the construction of the Myanmar-China Economic Corridor, fully implement projects in Kyaukphyu and push forward cooperation in such areas as transportation, energy, production capacity, humanities, border and at local levels, she said.

Myanmar is ready to join efforts with China to forge ahead, build the Myanmar-China community with a shared future and better benefit the two peoples, she said.

Aung San Suu Kyi said that a prominent feature in Myanmar-China relations has been their mutual respect, understanding and support.

China has long been giving Myanmar precious understanding and support at both bilateral and international levels, and the Myanmar people will always remember that, she said.

China's support is not out of self-interest, but to safeguard fairness and justice, which is particularly precious to small countries like Myanmar, she said.

Currently, problems concerning world peace and development, as well as international fairness and justice are yet to be solved, Aung San Suu Kyi said.

Some countries have been wantonly interfering in the internal affairs of other countries in the name of human rights, ethnic or religious issues, she said, noting that Myanmar will never bow to such pressure and interference.

Aung San Suu Kyi expressed hope that China will continue to defend justice for small- and medium-sized countries including Myanmar on international occasions and play a constructive part in promoting the peace process in her country.

Stressing that time reveals a person's heart and adversity tries a friend, Xi said China is a good friend worthy of Myanmar's trust.

Noting that China and Myanmar have jointly championed and practiced the Five Principles of Peaceful Coexistence, Xi said the two sides have not only trusted and helped each other and set a model for exchanges between countries, but also made historic contributions to the promotion of establishing a new type of international relations.

China has always adhered to respecting the people of all countries' independent choice of a development path suited to their national conditions, and insisted on non-interference in the internal affairs of other countries, Xi said.

China will continue to speak out for justice for Myanmar in the international arena, and support Myanmar in safeguarding its national dignity and legitimate rights and interests, Xi said.

China supports Myanmar in advancing the domestic peace process and achieving national reconciliation, and is willing to continue to play a constructive role in this regard, he added.

After the talks, the leaders of the two countries attended a ceremony of exchanging bilateral cooperation documents, covering political, economic, trade, investment, humanities, local and other fields.

China and Myanmar also issued a joint statement on Saturday.

According to the statement, both sides agreed to continue to enhance coordination and cooperation in regional and multilateral fora such as the United Nations, China-ASEAN cooperation and Lancang-Mekong cooperation platform.

They agreed to render mutual support on issues concerning each other's core interests and major concerns, to work closely on global issues concerning the challenges faced by developing countries, and to uphold jointly peace, stability and development in the region and the world.

They also pledged to continue bringing into full play the role of inter-governmental mechanisms for practical cooperation, such as the China-Myanmar Joint Committee on Economic, Trade and Technical Cooperation and China-Myanmar Agricultural Cooperation Committee, and deepen concrete cooperation in fields such as economy and trade, agriculture, forestry, industrial capacity, investment and finance. 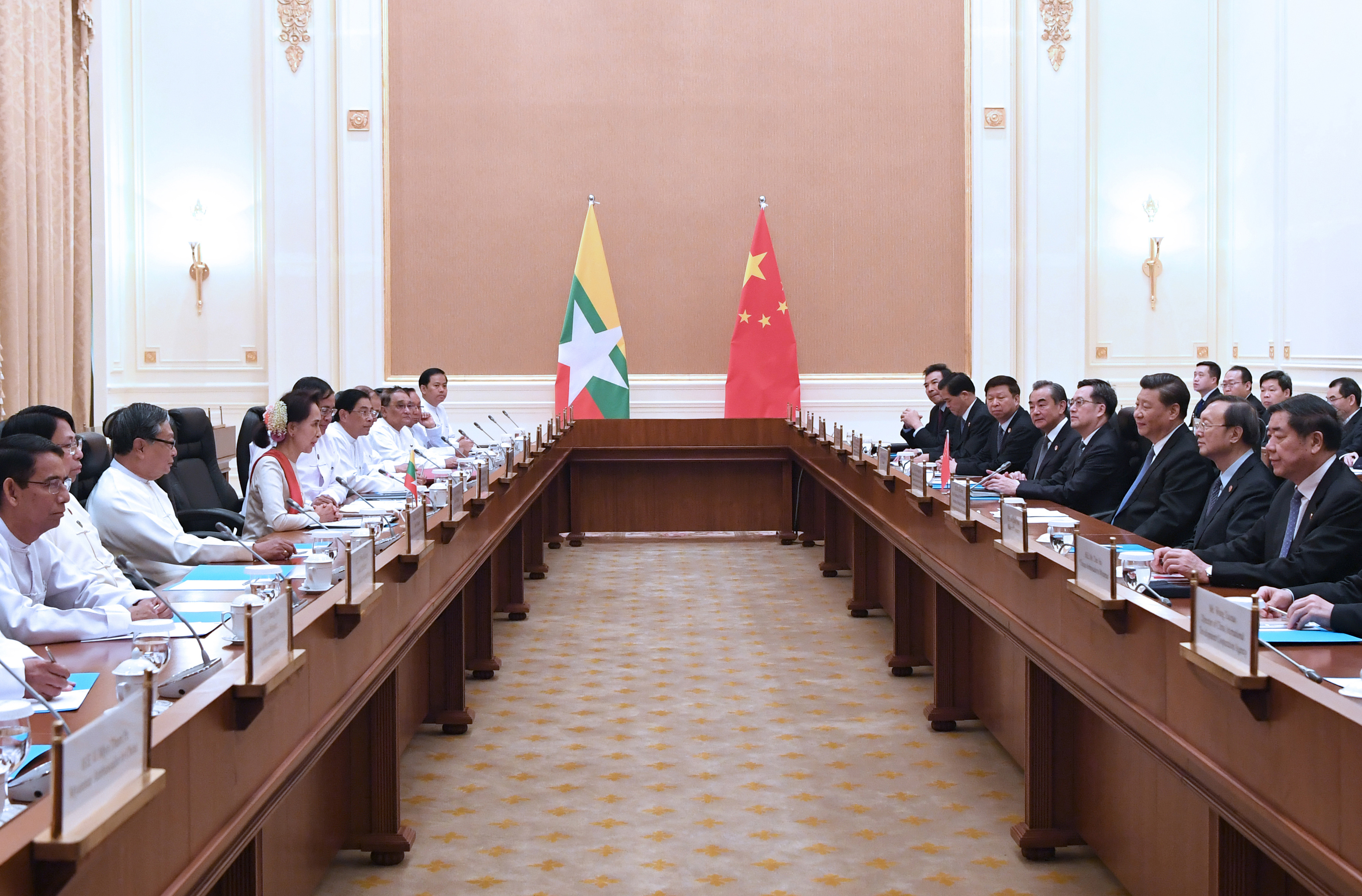