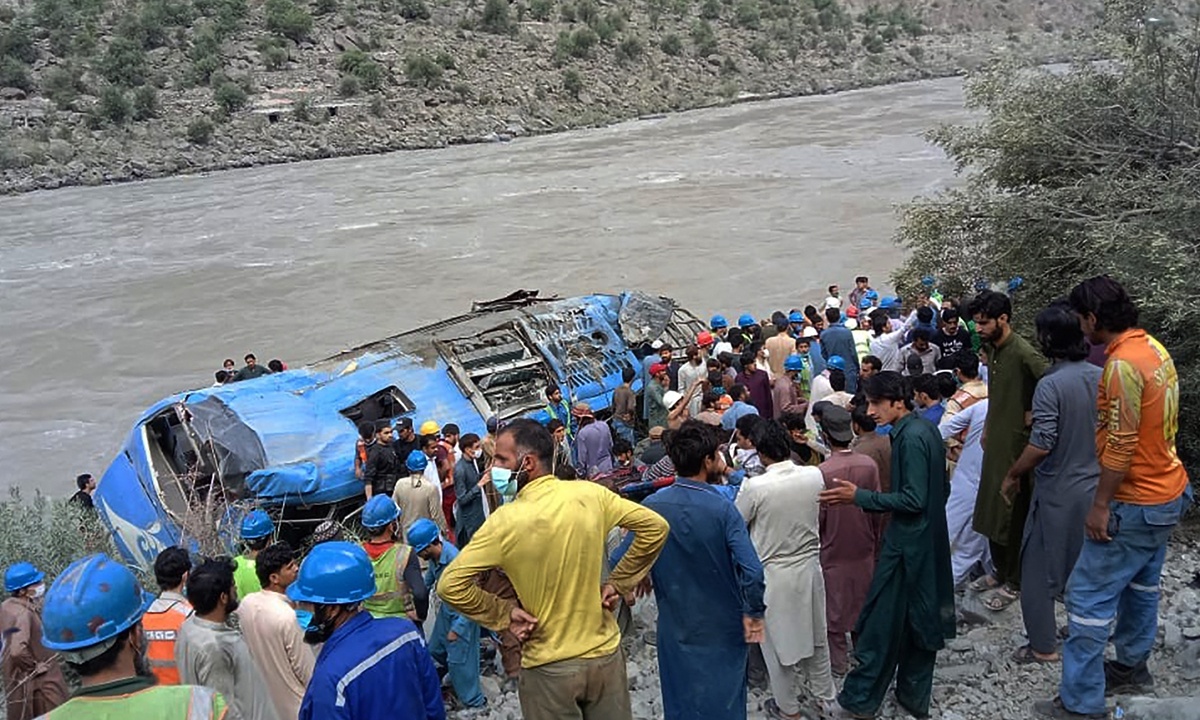 The shuttle bus blast in Pakistan which killed nine Chinese and four Pakistanis was confirmed to be a terrorist attack, as Chinese Premier Li Keqiang urged Pakistan to bring the perpetrators to justice in a phone call with Pakistan Prime Minister Imran Khan on Friday, marking the first time for both sides to confirm the blast as a terror attack after it happened two days ago.

When inviting Li for the phone call on behalf of the Pakistan government and people, Khan expressed his sincere condolences to the Chinese government and families of the victims in the terrorist attack in Pakistan that had caused great casualties to Chinese personnel. He also reported the progress of the current investigation and follow-up work.

Chinese Premier Li thanked Pakistan for the immediate rescue and investigation after the blast. He stressed the Chinese government pays high attention to the security of Chinese citizens and organizations overseas. The current urgent work is to rescue injured people to decrease casualties and remedial work.

The Chinese work team has arrived in Pakistan and will coordinate with Pakistan. China hopes Pakistan can provide assistance and use all necessary means to investigate the attack and bring the terrorists involved to justice, Li stressed, urging Pakistan to take effective measures to enhance the protection of Chinese personnel and organizations in Pakistan to avoid similar incidents.

There are complicated and deep changes in the global and regional situations. China attaches high attention to China-Pakistan relations and is willing to enhance strategic communications and coordination, deepen practical cooperation, safeguard regional peace and security and bring benefits to both peoples, Li said.

Khan said that Pakistan is working hard to save all injured people and will do its best to investigate the case and seize those who are responsible. Pakistan will closely cooperate with the Chinese team for their work in Pakistan.

Khan stressed that Pakistan pays high attention to the security of Chinese people and organizations in Pakistan and will strengthen protection measures to ensure the cooperation project is smoothly operated.

Before it was confirmed as a terror attack, Qian Feng, director of the research department at the National Strategy Institute at Tsinghua University, told the Global Times in an interview that Balochistan terrorists and the Pakistani Taliban were possible sponsors of the bomb attack.

Pakistani Taliban opposed the government out of religious reasons, and targeted cooperation projects with China that Pakistani government has been promoting. Balochistan does not want Pakistan to become integrated via economic development, which will make their separatist agenda bankrupt, Wang said.

Qian said the Pakistani Taliban gained notoriety by attacking the Pakistani government, civilians and army. In recent years, the terrorist group has targeted Chinese projects in the country, and launched attacks on Chinese tourists, as well as businesspeople, as they know that Pakistan attaches great importance to China-Pakistan ties, and they aim to use such attacks to sabotage bilateral relations, said Qian.

The Pakistani Taliban's activities had been subdued during the Pakistani government's continuous efforts against terrorism, yet they have been on the rise recently in the aftermath of the US withdrawal from Afghanistan, Qian pointed out.

While the security situation in Pakistan has been improving and the number of violent attacks has been decreasing, there has been an increasing trend of attacks against Chinese targets in the past two years, Wang Shida, deputy director of the South Asia, Southeast Asia and Oceania Research Institute of Contemporary International Relations Research Academy of China, told the Global Times.

Bilal Sabri, a Pakistani journalist, told the Global Times that, "we believe the hostile agencies are using every means to destroy the relationship of Pakistan and China by targeting Chinese people and the investment they are putting in. The sole purpose of this attack is to sabotage the CPEC, Belt and Road Initiative, and to halt the fast pace of its progress."