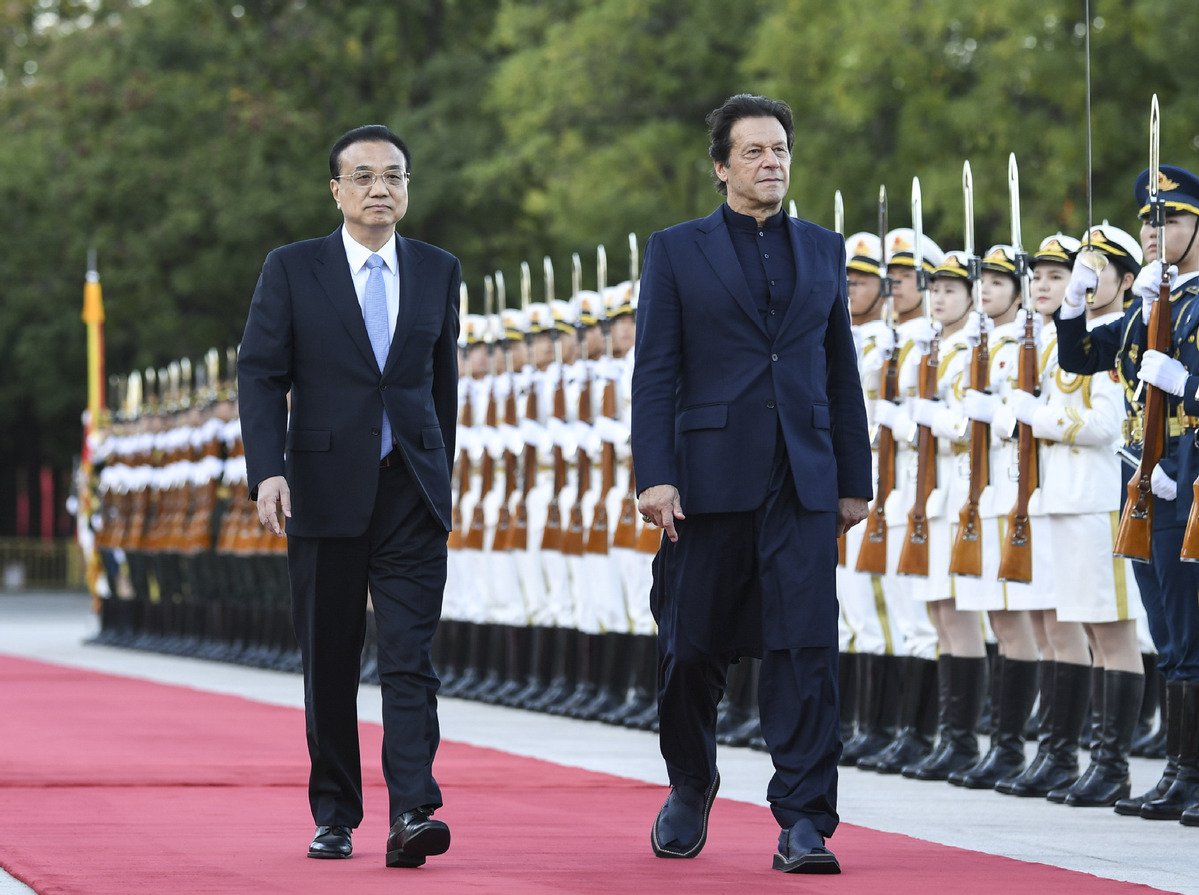 Premier Li Keqiang welcomes Pakistani Prime Minister Imran Khan with an honor guard outside the Great Hall of the People in Beijing on Tuesday. (Photo: Xinhua)

Khan is here to attend the closing ceremony of the International Horticultural Exhibition 2019 Beijing and pay a working visit to China.

Li first expressed his sincere condolences to Pakistan's government and people on their losses from the 5.8-magnitude earthquake that hit the South Asian country recently.

Noting that China and Pakistan are all-weather strategic cooperative partners, Li said the friendly relations between the two countries, which have no strings attached and are not targeted at any third party, enjoy a profound, solid foundation and win the heartfelt support of the two peoples.

Li said China attaches great importance to the prime minister's visit, and China-Pakistan ties have always been a priority for China's neighborhood diplomacy.

Li said China supports Pakistan in safeguarding its independence, sovereignty, territorial integrity, and legitimate rights and interests, in promoting its national prosperity, and in playing a greater role in international and regional affairs.

"China is ready to work with Pakistan to continue to deepen strategic mutual trust, expand pragmatic cooperation, enhance people-to-people and cultural exchanges, and push bilateral relations and cooperation to a new height," he said.

Li said China-Pakistan cooperation is not only in line with both countries' interests but also beneficial to regional peace and stability. He said that China is glad to see that Pakistan has managed to get through its economic hard times, and that China is willing to continue to provide assistance to Pakistan within its capacity.

He said China is ready to work with Pakistan to seek greater synergy between their development strategies, continue to promote the high-quality development of the China-Pakistan Economic Corridor (CPEC), strengthen cooperation in infrastructure, economy, trade, finance and industrial capacity, take strong measures to facilitate a more balanced development of bilateral trade, expand the export of competitive Pakistani products to China, and protect the safety of Chinese institutions and personnel in Pakistan, in a bid to promote mutually beneficial results and common development.

For his part, Khan extended congratulations on the 70th anniversary of the founding of the People's Republic of China. He said that thanks to China's assistance and support, Pakistan's economy has stabilized and gradually recovered. He said Pakistan stands ready to work with China to accelerate the joint construction of the Belt and Road and attaches great importance to the construction of the CPEC and Gwadar port.

Pakistan is willing to work with China to expand trade and investment, and promote cooperation in energy, hydroelectricity, nuclear electricity, railway and agriculture, he added.

After the talks, the two prime ministers attended a signing ceremony for a series of bilateral cooperation agreements including infrastructure construction, law enforcement and security, culture, education and media.

Prior to the talks, Li held a welcome ceremony for his Pakistani counterpart outside the Great Hall of the People.