China and Panama have hailed the prospects of their relations and the potential of their cooperation as Chinese State Councilor and Foreign Minister Wang Yi and Panamanian Foreign Minister Erika Mouynes met on Monday in Tunxi, east China's Anhui Province. 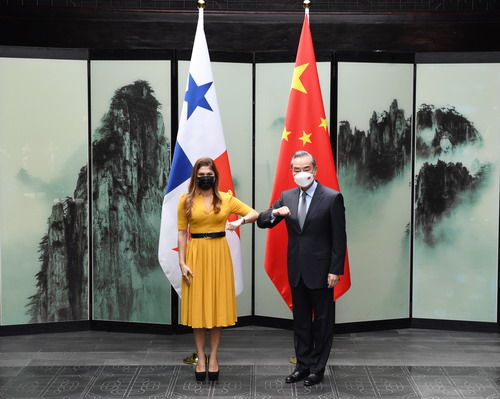 In June 2017, China and Panama established diplomatic relations, with the Panamanian government recognizing that there is but one China in the world, that the government of the People's Republic of China is the sole legal government representing the whole of China, and that Taiwan is an inalienable part of China's territory.

During the meeting, the two foreign ministers agreed that it has been proved that the establishment of diplomatic relations between the two sides was correct, and has brought tangible benefits to the two peoples.

China stands ready to work together with Panama to build the bilateral ties into a fine example of mutual respect between countries of different sizes, of unity and cooperation between developing countries, and of exchanges and mutual learning between different civilizations, Wang said.

He added that efforts should be made to boost mutual political trust, pragmatic cooperation, people-to-people exchanges and multilateral coordination between the two countries.

Noting that she was the first Latin American country's foreign minister visiting China since the start of the COVID-19 pandemic, Mouynes stressed the importance Panama has attached to developing relations with China, and thanked China's support in her country's fight against the pandemic.

Panama cherishes the mutual trust with China, and will be staunchly committed to the one-China principle, Mouynes said.

Both sides also vowed to consider restarting negotiations on a free trade agreement, and strength cooperation on agriculture and food, among others.