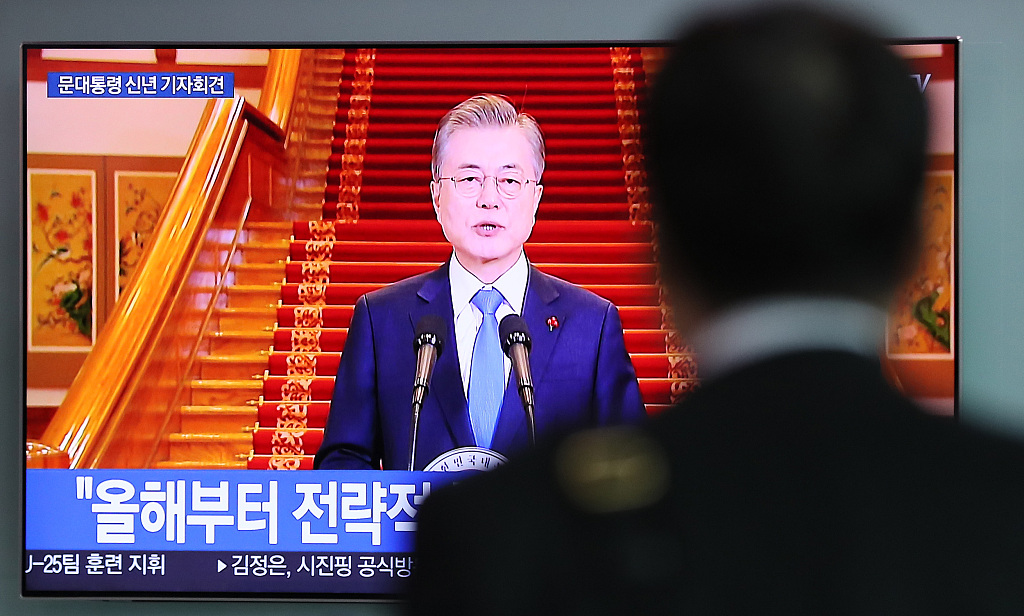 "Until now, China has played a positive role in helping very much the Korean Peninsula's denuclearization and improving inter-Korean relations," said Moon in the televised press conference.

China, Moon said, has always played a positive role in helping the summits between South Korea and the Democratic People's Republic of Korea (DPRK) and between the DPRK and the United States.

The latest summit talks between the top leaders of China and DPRK are anticipated to play "a very positive role" for the success of the second summit between Kim and US President Donald Trump, said the South Korean president.

Moon welcomed the offer by Kim Jong-un, top leader of the DPRK, to resume inter-Korean cooperation projects that require the lifting, or at least easing, of international sanctions on Pyongyang for the resumption.

"The Kaesong Industrial Complex and the Mount Kumgang tour project were beneficial to both South and North Korea (DPRK). (I) welcome North Korea's intention very much to resume (the operations) without any condition and compensation," Moon said.

Moon's remarks came in response to the overtures that Kim made during his New Year's speech earlier this month.

Kim said he was willing to reopen the inter-Korean factory park in the DPRK's border town of Kaesong and resume the tours by South Koreans to the DPRK's scenic resort of Mount Kumgang "without any preconditions."

Moon said prerequisites for the resumption of the two projects were already met between the two Koreas as Kim's overtures were hailed by himself.

The president vowed to cooperate with the international community, including the United States, to rapidly resolve the remaining issue of international sanctions on the DPRK.

The Kaesong Industrial Complex was closed down by South Korea in February 2016 over the DPRK's fourth nuclear test in the previous month.

The tourism project to Mount Kumgang, launched in 1998, has been suspended since 2008 when a South Korean tourist was shot dead by a DPRK solider after allegedly venturing into an off-limits area.

Moon said prerequisites for the resumption of the two projects were already met between the two Koreas as Kim's overtures were hailed by himself.

The president vowed to cooperate with the international community, including the United States, to rapidly resolve the remaining issue of international sanctions on the DPRK.

Moon said that if the second DPRK-US summit is to be held in the near future, Kim and Trump would try to narrow difference over it.

Regarding Kim's promise to make a reciprocal visit to Seoul, Moon said the DPRK leader's first-ever travel to South Korea itself would be a landmark turning point in inter-Korean relations.

Moon expected Kim's Seoul trip to take place after Kim's second summit with the US president.

After his third summit with Moon in Pyongyang in September, Kim promised to visit Seoul in the foreseeable future. If realized, he would become the first DPRK leader to visit South Korea since the Korean Peninsula was left divided with the armistice that ended the 1950-1953 Korean War.

Moon said the second DPRK-US summit and Kim's trip to Seoul would be a turning point to firmly solidify peace on the peninsula, vowing to tighten its guard until the promise to denuclearize the peninsula is kept and peace is fully institutionalized.

Meanwhile, Moon urged Japan to take a humble attitude over history, referring to Japan's protest against the top court's ruling on forced labor by the Imperial Japan during World War II.

"The Japanese government should respect the ruling by (South) Korea's judicial branch though it has complaints. It is not a wise attitude for Japanese politicians and leaders to politicize and cause controversy over the issue," Moon said.

The South Korean Supreme Court ruled in 2018 that two Japanese companies should compensate the South Korean victims who were forced into labor without pay during the Pacific War. The Korean Peninsula was colonized by Japan from 1910 to 1945.

Japan protested against the ruling, claiming that the colonial-era issue was resolved through the 1965 government-to-government deal that normalized ties between Seoul and Tokyo. It was in contrast to the Seoul top court's ruling that acknowledged the individuals' right to claim damages.

Moon said that despite the 1965 deal, unresolved issues have continued, noting that those issues were not created by the South Korean government.

The South Korean leader said those issues came from the long history of the miserable past, urging the Japanese government to take a humble attitude over history.