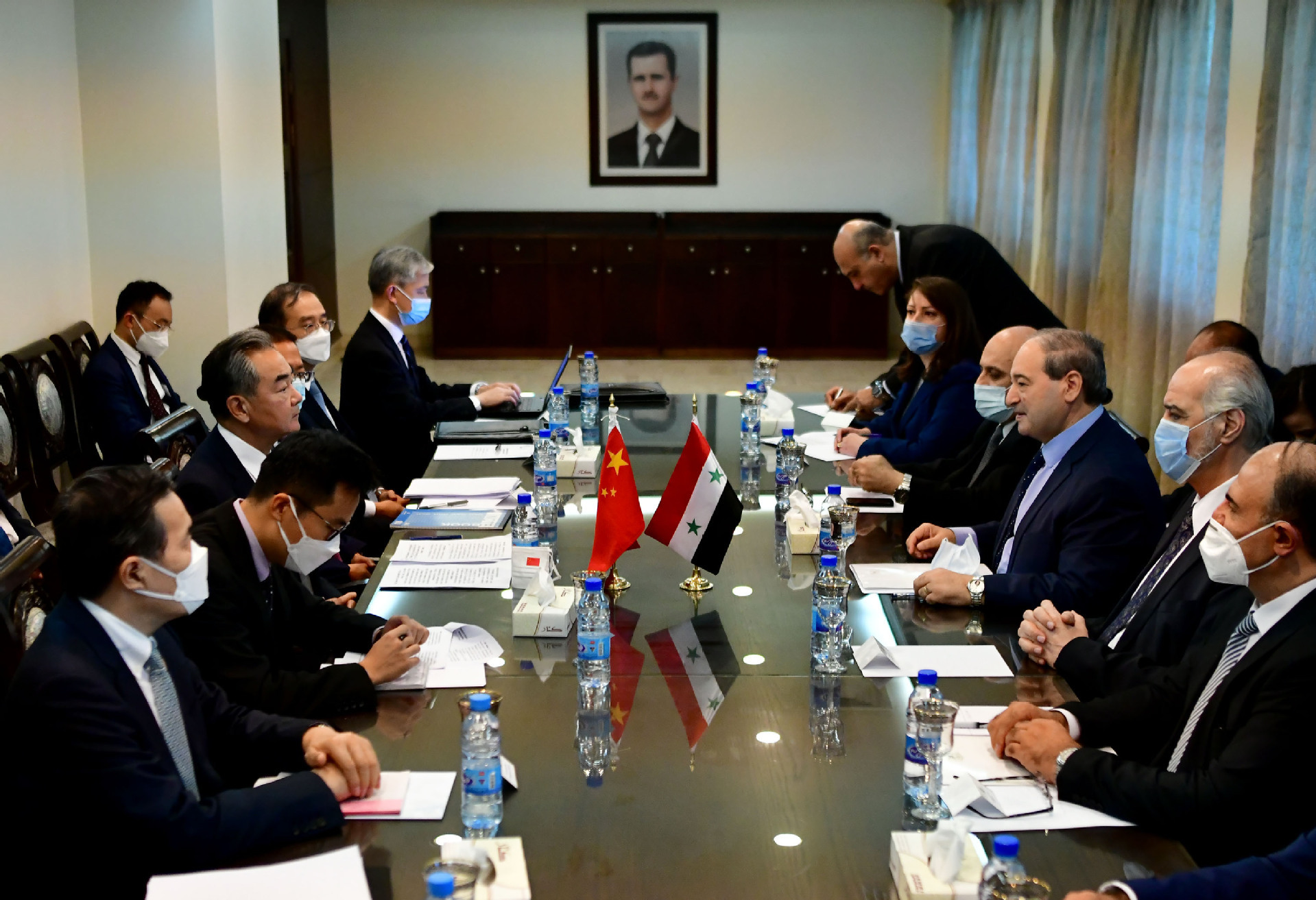 The Chinese senior diplomat elaborated on the proposal when he met with his Syrian counterpart Faisal Mekdad in Damascus, the capital of Syria.

Wang noted that the key to comprehensively solving the Syrian issue is the implementation of the "Syrian-led, Syrian-owned" principle established by the UN Security Council. He added that all relevant parties should make concerted efforts to effectively advance the comprehensive settlement of the Syrian issue.

In this regard, the Chinese foreign minister said, China has put forward a four-point proposal.

Firstly, Syria's national sovereignty and territorial integrity should be respected. China calls for respecting the choice by the Syrian people, abandoning the illusion of a regime change, and letting the Syrian people independently determine the future and destiny of their country.

Secondly, the well-being of Syrian people should be prioritized and the reconstruction process should be sped up. China believes that the fundamental way to solve the humanitarian crisis in Syria lies in the immediate lifting of all unilateral sanctions and economic blockade against Syria.

The international aid to Syria should be provided on the basis of respecting Syria's national sovereignty and in consultation with the Syrian government, the cross-line humanitarian assistance should be expanded, the transparency of cross-border rescue operations should be increased, and Syria's sovereignty and territorial integrity should be protected, Wang said.

Thirdly, a firm stand on effectively fighting terrorism should be upheld. China holds that all terrorist organizations listed by the UN Security Council should be cracked down and double standards should be rejected.

The Syrian government's leading role in fighting terrorism on its soil should be respected, schemes of provoking ethnic divisions under the pretense of countering terrorism should be opposed, and Syria's sacrifice and contribution to the anti-terror fight should be acknowledged, Wang said.

Fourthly, an inclusive and reconciliatory political solution to the Syrian issue should be promoted. China calls for advancing the political settlement of the Syrian issue led by the Syrians, bridging the differences among all Syrian factions through dialogue and consultation, and laying a solid political foundation for the long-term stability, development and revitalization of Syria.

The international community should provide constructive assistance to Syria in this regard and support the United Nations in playing its role as the main channel of mediation, Wang said.

For his part, Mekdad said that Syria agrees with China's four-point proposal and is willing to further strengthen its coordination with China on the Syrian issue.

China as an important member of the international community has always stood on the side of justice, said the Syrian diplomat, who also expressed the hope that China will play a bigger role in solving the Syrian issue and other international affairs.