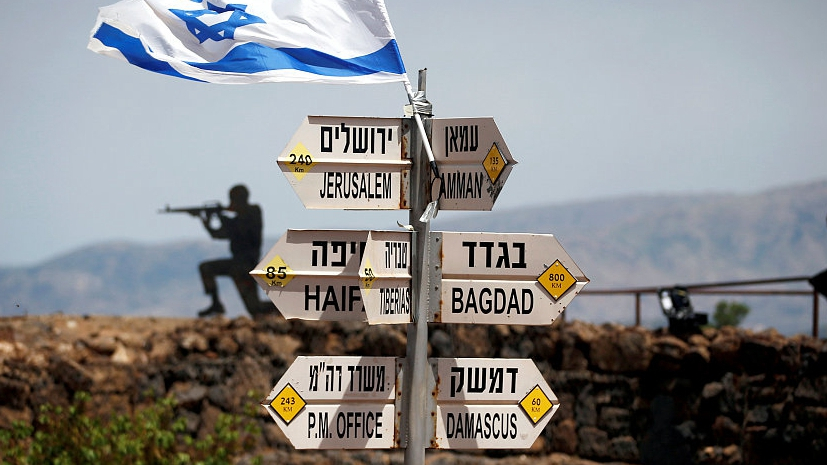 Signs pointing out distances to different cities, on Mount Bental, an observation post in the Israeli-occupied Golan Heights, May 10, 2018. (Photo: VCG)

The international community should stay united, and push for the resumption of Palestinian-Israeli peace talks, said Ma Zhaoxu, China's permanent representative to the United Nations (UN), during an open debate of the UN Security Council.

"With regards to other hot-spot issues in the Middle East, it is imperative for the international community to remain committed to political settlement, facilitate dialogue and negotiations, manage the situation in a constructive manner, and accommodate the legitimate rights and interests of all parties," he added.

Preserving the legitimate rights of the Palestinians is a shared duty of the international community, the Chinese envoy said, while expressing concern on the current deadlock.

The question of Palestine is at the core of the Middle East issue and the fundamental question for the region, he said.

The international community should promote the settlement of the question of Palestine with a view to establishing a fully sovereign state of Palestine based on the 1967 borders with East Jerusalem as the capital. Any new initiative put forward should be in conformity with the parameters, he said.

The Syrian Golan is internationally recognized as occupied territory and the UN Security Council has adopted several resolutions calling for Israel's withdrawal from it, said Ma. "China opposes any unilateral action to alter these facts and does not wish to see any further escalation of regional tensions."

US President Donald Trump last month officially recognized Israel's sovereignty over the Golan Heights, which Israel seized from Syria in 1967 and annexed in 1981. The move was met with widespread international condemnation.