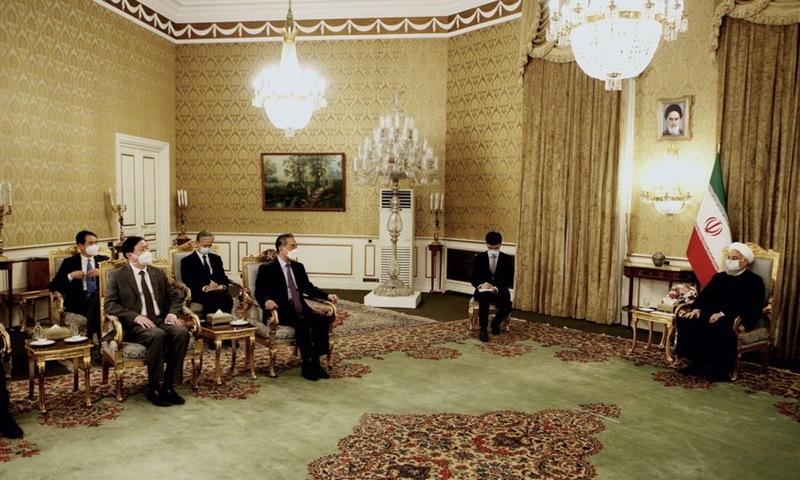 No matter how the world situation changes, China's willingness to develop the China-Iran relations will not change, Chinese State Councilor and Foreign Minister Wang Yi said on Saturday during his meeting with Iranian President Hassan Rouhani.

The Chinese foreign minister said that the China-Iran comprehensive strategic partnership has withstood the test of changes in the international situation.

Noting that this year marks the 50th anniversary of the establishment of diplomatic relations between the two countries, Wang said the document of comprehensive cooperation signed by the two sides on Saturday will map out an overall blueprint for boosting the China-Iran comprehensive strategic partnership, which will not only benefit the two peoples, but also make China-Iran contributions to maintaining regional and world peace.

No matter in the past, at present or in future, China is consistent in opposing the unreasonable unilateral sanctions imposed on Iran by other countries, because they violate the international law, especially those based on lies and false information, which are immoral and unpopular and constitute an affront to human conscience, Wang said.

China stands ready to work with Iran and other countries to jointly oppose the acts of bullying by powers, uphold international equity and justice, and defend the basic norms of international relations, the Chinese diplomat said.

Wang pointed out that it is time to seriously reflect on the bad consequences inflicted on the region by external interferences, and work together to explore effective ways to maintain long-term regional security and stability.

He said that the core of China's five-point initiative to achieve security and stability in the Middle East is to call on regional countries to uphold the sense of ownership, carry forward the spirit of independence, get rid of the interference of geopolitical competition, seek development paths suitable for the national conditions of regional countries, and establish a security framework in line with the interests of these countries.

China is willing to work with regional countries to this end, he added.

For his part, Rouhani asked Wang to convey his sincere greetings and best wishes to President Xi.

The Iranian president said that all walks of life in his country regard China as Iran's most important partner.

Recalling Xi's successful visit to Iran in 2016, Rouhani said it has promoted the remarkable development of the Iran-China relations.

Iran, he said, hopes to strengthen its cooperation with China in fighting the COVID-19 pandemic, deepen mutually beneficial cooperation in various fields, and enhance anti-terrorism cooperation.

Noting that Iran and China share the same or similar positions on regional and global issues, the Iranian president said that Iran advocates solving problems through dialogues and hopes to further bolster its coordination with China on maintaining regional security.

Rouhani said that the Joint Comprehensive Plan of Action (JCPOA) is a multilateral agreement, and the United States should not impose any preconditions for resuming its implementation of the nuclear deal and should take action first.

Iran appreciates China's important role in maintaining the agreement and stands ready to strengthen its communication and coordination with China on this matter, he added.

Calling the JCPOA as an important and hard-won achievement of multilateralism, Wang said that the unilateral withdrawal by the former U.S. administration from the deal set a bad precedent of non-compliance with international agreements and was unanimously condemned by the international community.

China welcomes the wish of the new U.S. government to return to the JCPOA, Wang said, adding that China believes that safeguarding the agreement means upholding multilateralism and the authority of the UN Security Council.

The JCPOA is not a revolving door, and no one should leave or return to it whenever it wants, he said.

The Chinese foreign minister called on Washington to reflect on the harm done by its pullout from the JCPOA to regional peace and international stability, as well as the losses caused to relevant countries.

The unilateral sanctions against Iran and the long-arm measures of jurisdiction against other countries including China should be lifted as soon as possible, he said.