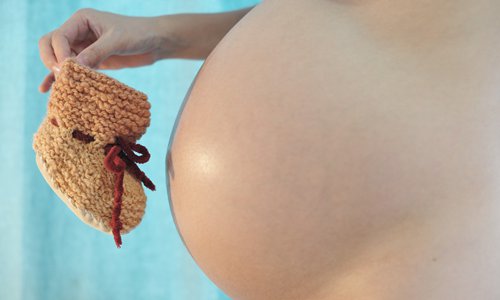 Bearing a healthy baby is a normal expectation for most mothers, however, sometimes this wish is simply unachievable.
Each year, nearly 900,000 newborn Chinese babies are affected by birth defects, according to official statistics, which means every 35 seconds a baby is born with a birth defect.
Researchers recently kicked off a population-based study of 500,000 pregnant women across the country that aims to improve the situation by establishing the first nationwide - and the largest worldwide - database of major birth defect causes.
The project is being conducted at 33 medical institutions in 17 provinces, and may soon expand into Xinjiang Uyghur Autonomous Region and Yunnan Province, according to Yin Chenghong, director of the research project who is also vice-president of Beijing Obstetrics and Gynecology Hospital.
"After tracking 500,000 pregnant women, we may learn about a wider range of birth defects and the factors that caused them. The research also has a guiding significance for birth defects prevention and control. For example, we probably could make a conclusion on whether PM2.5 has a direct relation with birth defects," Yin told the Global Times.
Well-known among local pregnant women due to its advanced medical resources and experienced experts, Yin's hospital is the nation's leading medical institution for birth defects research. 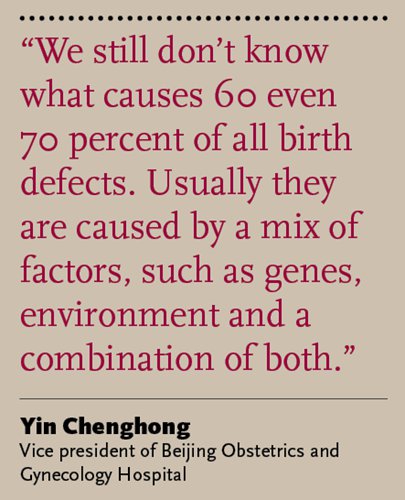 Late pregnancy
Wendy (pseudonym) is presently 34 weeks pregnant and comes to Beijing Obstetrics and Gynecology Hospital twice a month to do pregnancy checks.
In addition to routine examinations, Wendy also receives Non-invasive Prenatal Testing to screen for Down Syndrome due to her advanced maternal age - 36 years old.
"I am a college professor and stay at school all the time, so I don't feel I am an 'old woman.' So many social factors give rise to late pregnancy and this is very common now," she said.
According to official statistics, China's birth defects rate is 5.6 percent at present, which is similar to the level of middle-income countries set by the World Health Organization.
Due to China's extraordinarily large population, nearly 900,000 families across the nation are affected by birth defects, according to statistics by the then Ministry of Health in 2012.
Experts say birth defects are a result of many potential causes, among which late pregnancy contributes to higher risks.
"With the adoption of the new universal two-child policy, the number of mature pregnant women has increased. Birth defects have a direct correlation with the age of the mother, so we are facing serious challenges at present," Yin said.
Huang Wenzheng, a senior researcher at the Center for China and Globalization, told Bloomberg that "China's number of births will continue to drop dramatically, considering a sharp decrease in the number of fertile women and declining fertility willingness."
China is under pressure to boost fertility. Although China in 2016 began to allow all couples to have two children, its birth rate was on a downswing in 2017 compared to the previous year, the country's national statistics bureau said.
Witnessing a low fertility rate, some demographic experts have predicted that China may soon end all limits on birth. Under such a circumstance, with more older mothers facing higher risks during pregnancy, bearing and rearing healthy children has become a vital agenda for the country.
On the other hand, threats such as China's aging population, which is predicted to reach 25 percent of the total population by 2030 according to the State Council, also make such research more meaningful and necessary than ever, as a high-quality population could ease the crisis of China's shrinking labor force.
Rare diseases more common
Abnormal body structural changes, physical dysfunctions and metabolic disorders during pregnancy can dramatically affect how a baby's body looks, works or both, varying from mild to severe.
Some birth defects are easy to recognize, such as hearing loss or a cleft lip. There is a higher rate of newborns in China suffering congenital heart disease, polydactyly (supernumerary fingers and/or toes) and cleft lips. Popular Chinese singer Faye Wong's daughter, Li Yan, was born with a cleft lip, which drew nationwide attention to this particular birth defect.
The Ministry of Health said that birth defects are on the rise in China, from 109.79 per 10,000 in 2000 to 153.23 per 10,000 in 2011.
This statistic was echoed by the Beijing orphanage, whose staff told the Global Times that they have been receiving a greater percentage of children with birth malformations in recent years.
"Rare diseases are becoming more and more common here. Although people from various fields want to help children with birth defects, our existing medical and scientific level cannot find any way to cure them, not even in Beijing which boasts the most advanced medical institutions in China," the anonymous staff member said.
Director of Ultrasonic Department at Beijing Obstetrics and Gynecology Hospital, Wu Qingqing, recalled a bitter story of a family who suffered five stillborn babies, each with congenital heart disease.
"After bearing twins with complicated congenital heart disease, the woman aborted them. But no one would expect her next three fetuses all got the same disease. It is devastating news to the family," Wu said.
Wu encourages women to try to get pregnant between the ages of 23 and 30, and always receive regular prenatal examinations.
Air pollution suspected
"We still don't know what causes 60 even 70 percent of all birth defects. Usually they are caused by a mix of factors, such as genes, environment and a combination of both," Yin explained.
An increasing number of Chinese parents are worried that air pollution is harming their children's (and unborn children's) health. A pregnant woman in Beijing surnamed Shi told the Global Times that she runs several air purifiers in her home at all times, even if it is sunny and clear outside, which is a common scene among pregnant families.
"I feel horrible for children who have to breathe (bad air). Several of my friends moved to southern cities with cleaner air out of their concern for their babies' health," Shi said.
Robert Scherpbier, UNICEF's Chief of Health and Nutrition in China, once told Voice of America that "There is no evidence birth defects are linked to air pollution."
Yin also said that there is no reliable information that proves birth defects are related to air pollution. "But we do believe PM2.5 is linked to some fetal development problems," he added.
In addition to social and environmental factors, the quality of diagnosis procedures available in recent years and people's growing awareness to receive regular prenatal medical tests have also contributed to the increasing number of birth defects diagnosis, Yin noted.
"Most pregnant women who come to our hospital support our research and voluntarily contribute 10 millimeters of their blood for our database," Yin added.
He highlighted the difficulty of the project at this stage. "Our research is prospective and does not have existing research to refer to. We will hopefully make new findings based on our large database and then we can share this with the international society and contribute to worldwide birth defects research."