China, ROK, Japan agree to deepen cooperation in next decade 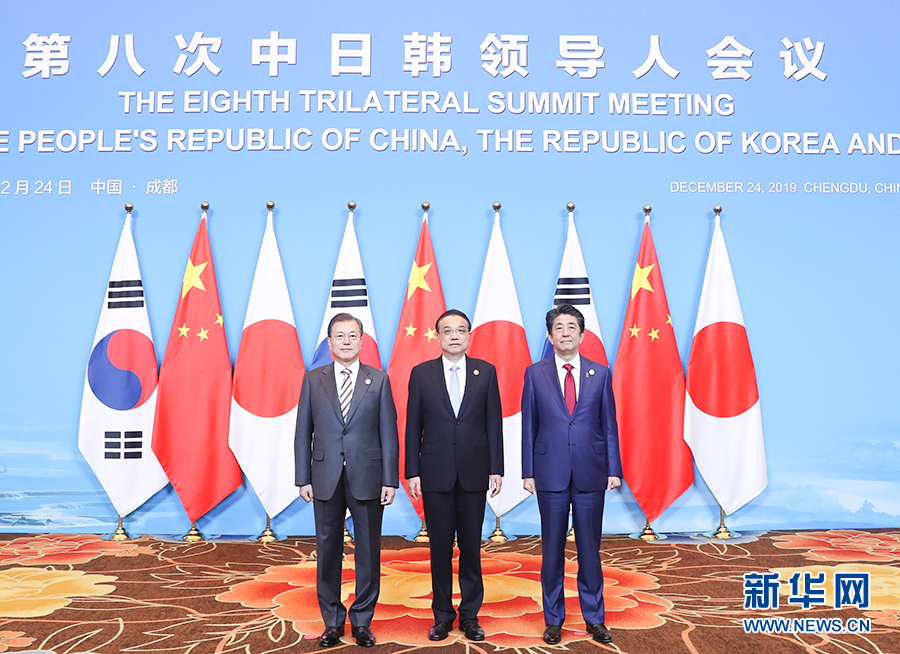 This year marks the 20th anniversary of China-ROK-Japan cooperation.

Li said China, Japan and the ROK are important development partners and have highly complementary economies as well as industry convergence. Despite facing twists and turns, they are committed to achieving win-win results through cooperation and tackling differences through dialogue.

Li made several suggestions on deepening cooperation among the three countries.

He called on the three countries to consolidate the foundation of mutual trust and safeguard the overall situation of cooperation.

The three countries should view each other's development from an objective and reasonable perspective, uphold a right attitude toward history and the future, respect other countries' core interests and major concerns, focus on cooperation featuring mutual benefit and win-win results, and resolve differences through dialogue and consultations to create favorable conditions for deepening cooperation, Li added.

The Chinese premier also called on the three countries to chart their cooperation from a strategic height and long-term perspective, clarify the direction and key areas of cooperation, deepen pragmatic cooperation and build the partnership.

On free trade agreement (FTA) negotiation and regional economic integration, Li said China, Japan and the ROK are firm supporters of the Regional Comprehensive Economic Partnership (RCEP) and should promote the signing of the RCEP in 2020 as scheduled.

Li encouraged the three countries to speed up their FTA negotiations, and build a free trade zone of higher standards as soon as possible to achieve a higher level of trade and investment liberalization and facilitation.

Noting that China, Japan and the ROK are major innovation countries and have complementary advantages, Li called on the three countries to improve their capacity for innovation and share their achievements.

Noting that the current international landscape is undergoing profound changes, Li pointed out that China, Japan and the ROK should strengthen their unity, uphold multilateralism and free trade, jointly address challenges and make contributions to regional and global prosperity and stability.

The Chinese Premier then further expounded his views in four aspects.

First, the three countries should jointly safeguard regional peace and stability, said Li, adding that the denuclearization of the Korean Peninsula and the establishment of a peace mechanism is in the common interests of China, Japan and the ROK, and the three countries should continue to promote dialogue for progress, properly handle the legitimate concerns of all sides to push for a political resolution to the peninsula issue and realize lasting peace in the region.

Second, the three countries should champion a new vision of common, comprehensive, cooperative and sustainable security, and pursue the overall security of the region on the basis of common security interests, said Li, adding that security cooperation among countries should not target any third party or damage regional stability.

Third, China, Japan and the ROK should uphold the principle of mutual respect, fairness, justice, cooperation and win-win results, safeguard free trade, promote the reform of the World Trade Organization and oppose "decoupling", he said.

For his part, Moon applauded the achievements of trilateral cooperation over the past 20 years.

He said against the backdrop of rising trade protectionism and increasing uncertainties, the three countries should closely work with one another, continuously expand their common interests, actively carry out cooperation in areas including climate change, environment, health, and aging population, focus on promoting technological innovation cooperation, intensify the protection of intellectual property, enhance people-to-people exchanges, and consolidate the foundation of future-oriented cooperation.

The ROK is ready to work with related parties to promote the denuclearization of the peninsula and safeguard peace and stability on the peninsula, Moon said.

Hailing that trilateral cooperation has had an extraordinary journey over the past two decades, Abe expressed hope that the three sides can pool their experience, chart a blueprint for cooperation in the next 10 years, and foster "triple win" relations.

The three sides should take the opportunities of successively hosting the Olympic Games to promote cooperation in such areas as sports, tourism and culture, Abe said.

Abe added that under the current situation, Japan is willing to work with China and the ROK to safeguard free trade and multilateralism, as well as a fair, impartial and non-discriminatory investment and business environment.