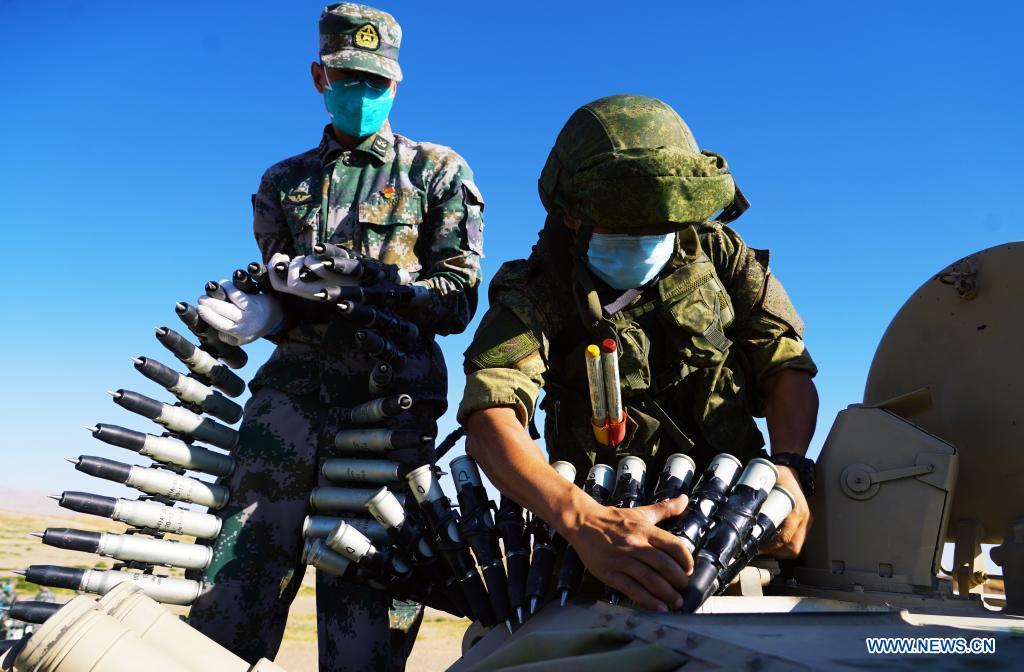 The joint China-Russia military exercise "Zapad/Interaction-2021" ended on Friday afternoon in Northwest China's Ningxia Hui autonomous region, as more than 10,000 troops from both sides took part in a massive live-fire drill before its conclusion.

Chinese State Councilor and Defense Minister Wei Fenghe and his Russian counterpart Sergei Shoigu witnessed the last drill at the PLA Ground Force's Qingtongxia Joint Tactical Training Base in Ningxia, according to a statement from the Chinese Defense Ministry.

In addition to soldiers, many heavy weapons such as aircraft, artillery guns and armored vehicles were used in the operation.

Wei told Shoigu the Chinese military will strengthen its comprehensive strategic collaboration with Russian armed forces for the common good of humankind and the world's peace and stability.

Shoigu said Russia will foster its strategic communication with China, deepen cooperation in anti-terrorism and other fields and work together to safeguard regional peace and stability.

The joint exercise began on Monday morning, becoming the PLA's first joint exercise with a foreign military this year and also the fourth consecutive joint operation held by the Chinese and Russian militaries since the Vostok (East) 2018, Tsentr (Center) 2019 and Kavkaz (Caucasus) 2020 exercises, which were held in different parts of Russia.

More than 10,000 troops from the PLA Western Theater Command and the Russian Armed Forces' Eastern Military District, as well as about 200 aircraft, more than 200 tanks and armored vehicles, and over 100 artillery guns from both sides were involved in the exercise.

The PLA sent some of its most advanced hardware such as the J-20 stealth fighter jet, the KJ-500 early-warning plane and the PCL-181 self-propelled howitzer to take part in the event.

Senior Colonel Wu Qian, a spokesman for China's Defense Ministry, said the exercise was intended to strengthen the nations' bilateral comprehensive strategic partnership, deepen cooperation and friendship between the two militaries and display the two sides' determination and capability for cracking down on terrorism and protecting regional peace and security.