WORLD China, Russia to break US hold on 'world order'

China, Russia to break US hold on 'world order' 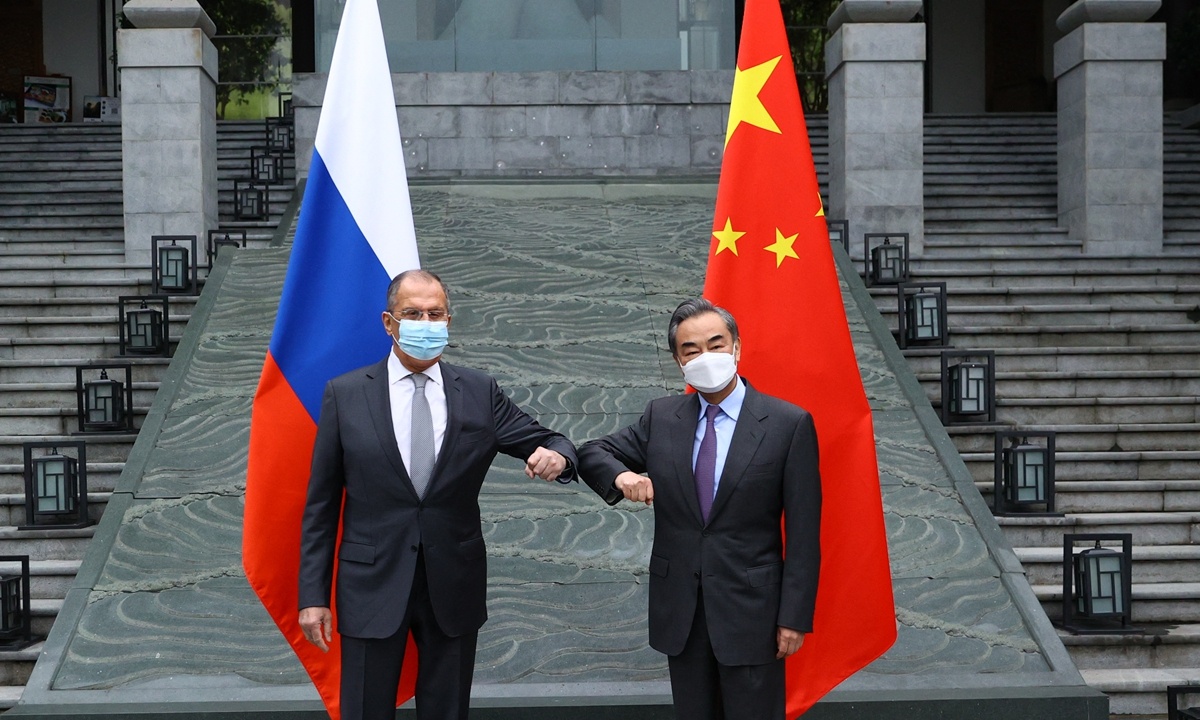 When the US vowed to return to multilateralism and try to fix its alliance by stressing values of "democracy and human rights" and forming cliques to confront other countries that reject US hegemony, China and Russia have stood up to break the silence and provide their definition of multilateralism and the values that the world should uphold.

Chinese State Councilor and Foreign Minister Wang Yi on Tuesday held talks with Russian Foreign Minister Sergei Lavrov, and the two reached a strategic consensus, according to a statement released by the Chinese foreign ministry.

At the 51st meeting between Wang and Lavrov in Guilin, South China's Guangxi Zhuang Autonomous Region, they released a joint statement on global governance after the talks, following the Alaska dialogue in which Chinese and US chief diplomats made no joint statement.

Analysts said the US is trying to use its own definition of international order and universal values to manipulate and discipline other countries to extend its hegemony, and that's why China and Russia, two permanent members of the UN Security Council, must speak out to break its monopoly on narratives and rule-making, to push the democratization of international relations.

The two foreign ministers agreed that pragmatic cooperation has strongly boosted the two countries' economic and social development, and their international coordination has contributed stability and positive energy to the world. Wang said China is willing to discuss with Russia on establishing the mechanism of health code mutual recognition by taking into consideration the mutual concerns and through friendly consultations.

Ruan Zongze, executive vice president of the China Institute of International Studies, told the Global Times on Tuesday that the joint statement reflects the two countries' determination to uphold global justice in a gradually multi-polarized world, while the US, using multilateralism as a disguise, has been imposing its ideology on others and meddling in other countries' affairs to maintain its hegemony.

Although the US is pushing China and Russia to "play by its rules" while threatening sanctions on various fronts, the two countries have made it clear that they will retain an independent diplomatic posture and an open attitude to welcome cooperation and dialogue from the US, experts noted.

However, it is also clear that China and Russia will not be at the mercy of others, but will defiantly fight back if the "trouble-maker" infringes on major issues, experts said.

US Secretary of State Antony Blinken arrived in Brussels on Monday for meetings this week aimed at boosting ties with NATO allies and partnering on "concerns over China and Russia," according to the US Department of State.

"The US is trying to fix ties with NATO allies and seek a unified stance on the Indo-Pacific to pressure China and Russia, manifesting an outdated Cold War mentality," said Ruan.

"But Europe, having its attitudes shifted toward the US, will not follow Washington's order to blindly confront China and Russia, as there are differences and doubts toward the US," Ruan said.

Chinese experts said Europe is relying on Russia's energy supply, although they have differences on security and politics, and the EU also wants to cooperate with China to boost the economic recovery as EU decision-makers know that the frictions or conflicts on human rights or ideology should not impact China-EU economic ties. Such a pragmatic mentality makes the US unable to fool them.

In the face of US sparing no efforts to win over allies, China and Russia do not need to "dance to its rhythm" to also form cliques to confront the West and launch a new Cold War, Feng Yujun, director of the Institute of Russian Studies at the China Institutes of Contemporary International Relations, told the Global Times on Tuesday.

On future cooperation on health code mutual-recognition and possible "vaccine passports," Ruan believes they will boost personnel exchanges and the resumption of business and trade.

Feng said that they should not be recognized merely between the two countries, but should include more countries, especially the West, into such a mechanism, so China and Russia are not excluding the West in global governance, and we hope the US and its allies could think the same way. "To reactivate global reopening needs the cooperation of the West, including the US."