BEIJING, Sept. 23 (Xinhua) -- Chinese President Xi Jinping has reaffirmed commitments to closer global cooperation and stronger multilateralism at the high-level meetings of the United Nations (UN) in order to rise to the challenges in the post-pandemic era. 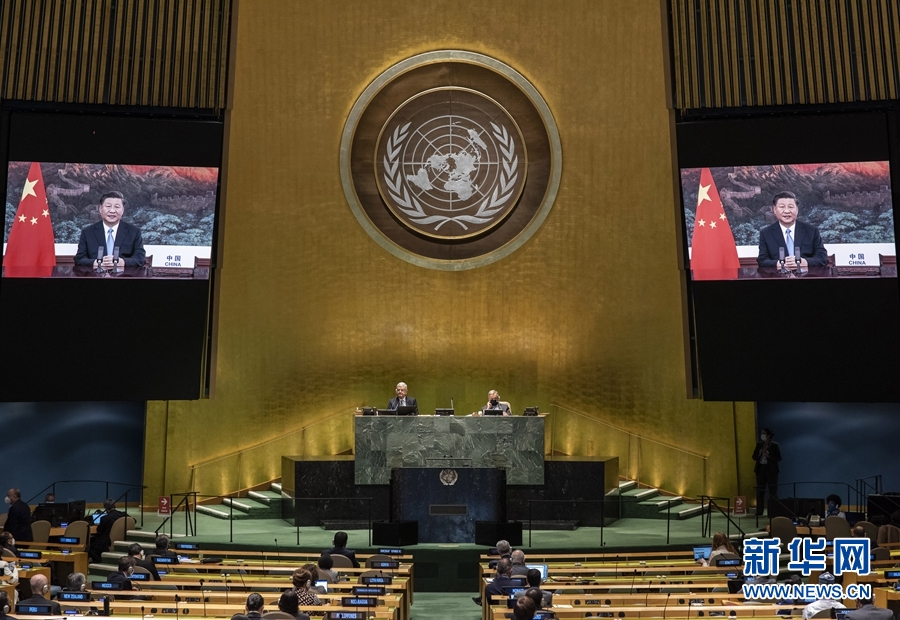 While addressing world leaders on Monday and Tuesday, Xi expounded his concepts and proposals via video link on how to tackle crises brought by ravaging coronavirus, rising unilateralism and protectionism and unbalanced and inadequate development.

"President Xi drew the world together with a plan and a vision of how to work," said Stephen Perry, chairman of Britain's 48 Group Club. "He is a beacon of hope in a dark moment of the planet. I hope he can carry other national leaders with him and to focus on making the world work right."

To beat back the pandemic that has infected over 30 million people and claimed nearly 1 million lives worldwide, and to invigorate the global economy as early as possible, Xi called on the international community to put people and life first, enhance solidarity and adopt comprehensive and long-term control measures to get through the global public health crisis together.

During the general debate of the 75th session of the UN General Assembly on Tuesday, he noted that any attempt of politicizing the pandemic or stigmatization must be rejected, saying countries should show concern for and accommodate the need of developing countries, especially African countries.

Only when countries around the world stand together as one, help each other, and jointly battle the pandemic, can the human race achieve the final victory in the fight against the virus, said Donald Rushambwa, a researcher at the China-Africa Economic and Culture Exchange Research Center in Zimbabwe, while highlighting China's exemplary role in this regard.

Noting the coronavirus ravaging the world is a common enemy of humanity, Gyula Thurmer, president of the Hungarian Workers' Party, said "the international community can only prevail over the pandemic by upholding the concept of building a community with a shared future for mankind."

The COVID-19 pandemic is a reminder of the fact that all countries are closely connected and share a common future. In the face of the previous unknown virus, China has been actively involved in the global combat of COVID-19 by sharing valuable information and experience in disease control and treatment, providing medical supplies to hard-hit countries, joining global scientific researches and resuming business in an orderly way to maintain the running of global supply chains.

El Hadji Alioune Diouf, professor of Senegal's National School of Administration, said the steady recovery of China's economy will "contribute to stability of the world economy and improvement of business environment."

As Xi pointed out, "COVID-19 will not be the last crisis to confront humanity, so we must join hands and be prepared to meet even more global challenges."

The UN, at the very center of multilateralism, is expected to play a bigger and more active role in addressing global issues, as unilateralism and protectionism are eroding the foundation of the global economy and governance system.

The Chinese president said at the UN meetings that countries should not dodge the challenges of economic globalization and must face up to major issues such as the wealth gap and the development divide.

"We should stay true to multilateralism and safeguard the international system with the UN at its core," Xi said, stressing that global governance should be based on the principle of extensive consultation, joint cooperation and shared benefits so as to ensure that all countries enjoy equal rights and opportunities and follow the same rules.

President Xi "is choosing the path of working multilaterally, working with other countries, treating each country as equals, which is a basis of the United Nations operation," said William Jones, Washington bureau chief of the U.S. publication Executive Intelligence Review.

"China seeks to build a new type of international relations that features mutual respect, just and win-win cooperation," which will help build an "open, inclusive and clean" world, she said.

In pursuit of common development in a better world, China made pledges and has fit its deeds to its words. In 2015 when the UN celebrated its 70th anniversary, Xi announced a series of initiatives and measures in support of the 193-nation body, which have all been implemented so far.

The year of 2020 will mark China's success of poverty alleviation and meet 10 years ahead of schedule the target set out in the 2030 Agenda for Sustainable Development. Aiming to build a shared future, China is striving to create new drivers for shared development through various platforms such as the Belt and Road Initiative.

Robert Lawrence Kuhn, chairman of the Kuhn Foundation, said China's poverty alleviation could serve as a good example for and will benefit other developing countries across the world.

Furthermore, China pledges to take more vigorous and effective approaches when pursuing green and sustainable development. China aims to have CO2 emissions peak before 2030 and achieve carbon neutrality before 2060, according to Xi.

Jeffrey Sachs, an economics professor at Columbia University and a senior UN advisor, said he expects China will achieve the goal even ahead of the date, "as China is in the process of establishing world-class technologies" in green energy and high-tech industries.