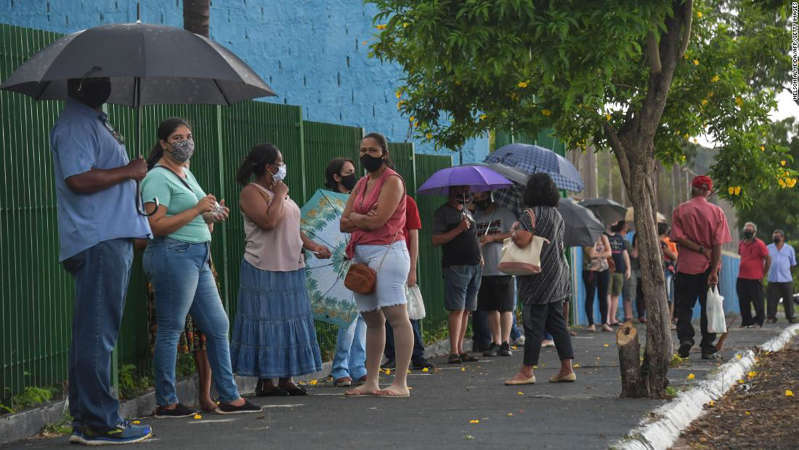 With the help of a coronavirus vaccine from China, a small Brazilian city is emerging from the pandemic.

After 96 percent of adults in the commuter city of Serrana in Sao Paulo state were given two shots of CoronaVac-produced by Chinese drugmaker Sinovac Biotech, coronavirus infections were drastically reduced, as were COVID-19 deaths.

The vaccine experiment was conducted by the Butantan Institute, a Brazilian state-owned research center, and the Sao Paulo University of Medicine.

Marcela Silvino, a 33-year-old social worker who takes care of vulnerable children, told China Daily that she felt she could finally take a breath.

"If we didn't have the opportunity given by the CoronaVac Project S, we probably would be in chaos," she said. "Now, we are recovering. People are not sick anymore; the market is returning, and we feel much safer."

Dimas Covas, president of the Butantan Institute, which also manufactures CoronaVac in Brazil, said the experiment, called Project S-S stands for secret because the institute didn't want people to flock to the city for the much sought-after vaccine-was started in August 2020.

"We measured, in a controlled way, the effects of immunization," Covas said in an announcement on June 1. "Serrana was changed into an epidemiological laboratory. We mobilized 600 people, created a monitoring center, established a whole system to make it possible, all of this done in a short time."

Marcos Borges, director of the municipal hospital in Serrana, said in the announcement that the city had 45,644 residents, with 28,000 adults-62 percent of the population.

"We divided the city in 25 micro areas and four groups, from which we chose randomly from the first group, then the second, third and fourth. We first tested people to know how many citizens were already infected. Then, we started the immunization," Borges said.

When the project began, more than 25 percent of Serrana residents had been previously exposed to the virus. Only residents aged 18 and older without chronic diseases and who were not pregnant were eligible. After eight weeks, 96 percent of those, about 27,000 in total, received two shots between February and April, given at a four-week interval.

"It means that, if the government has the vaccine, the population is willing to take it," Borges said.

Ricardo Palacios, medical director of Project S and a researcher at the Butantan Institute, said that after one week, a noticeable reduction in the number of cases was registered. When about 75 percent of the eligible population were vaccinated, the outbreak was effectively under control.

The final results were encouraging. Symptomatic COVID-19 cases dropped by 80 percent, hospitalizations by 86 percent, and deaths by 95 percent.

In comparison, COVID-19 cases continued to surge in more than a dozen other cities around Serrano.

"Serrano is now an oasis," said Palacios. "And it has shown us that it is surely possible to control the epidemic through vaccination."

Palacios said Project S "offers important information on how many people have to be vaccinated to protect the entire population" and cut the line of transmission. "Although this study is not completed yet, is a very important step," he said.

Project S is expected to conclude in February next year.

"We see almost no adverse effects, which makes it clear that CoronaVac is close to 100 percent safe, more than other vaccines," Borges said.

On the day the results of Project S were released, the World Health Organization authorized the emergency use of the Sinovac vaccine.

Brazil had more than 17.3 million COVID-19 cases and over 486,200 related deaths as of Monday, according to WHO data. The Serrana results are reassuring to Brazilians because CoronaVac makes up 80 percent of all vaccines administered so far in Brazil, according to Science Magazine. Less than 20 percent of Brazil's population have had at least one shot.