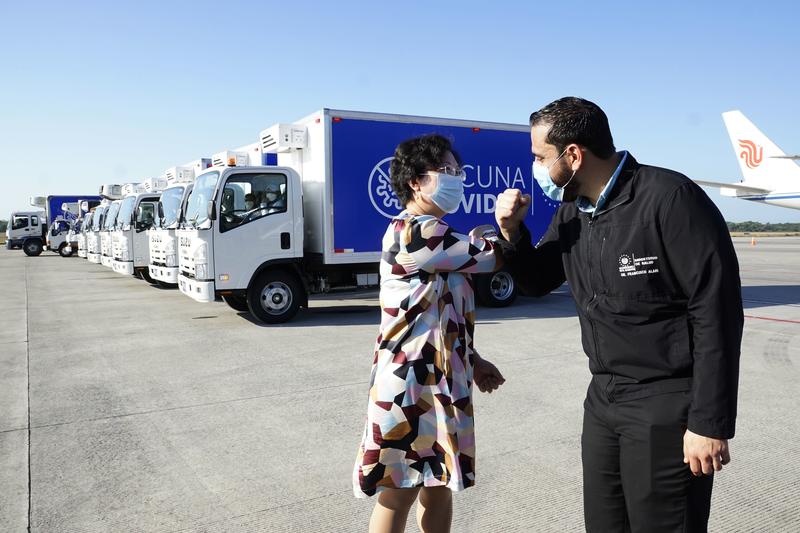 SAN SALVADOR, Oct. 27 (Xinhua) -- China's cooperation with El Salvador in the health sector has been fundamental to combating the COVID-19 epidemic in the Carribean country, Salvadoran Health Minister Francisco Alabi has said.

"We have the best vaccination management in Central America ... thanks to the bilateral relationship," Alabi said in a recent interview, noting that since March, the timely arrivals of several batches of COVID-19 vaccines from China have ensured that the elderly, medical staff and other high-risk groups in El Salvador were vaccinated first.

The minister reiterated his gratitude to China for sharing its know-how with El Salvador so it can embark on a path of overcoming "all the combined difficulties of many years" that have prevented the country's progress.

Amid the pandemic, China has acted in a timely manner with altruism and a sense of solidarity for the benefit of the entire world, sharing not only biological resources but also "measures and recommendations for the management of the pandemic," said Alabi.

"We followed China's recommendations in terms of scientific treatment, and different drugs and strategies that were available," Alabi said. "We also learned a lot from the excellent work they did in the construction of hospitals to treat patients."

El Salvador also learned from China's orderly reopening and complied health protocols in order to reactivate its economy, he noted.

China's cooperation with El Salvador has gone beyond supplies of vaccines and other medical assistance, the minister said.

Over three years since the establishment of diplomatic relations, bilateral cooperation has been very "committed" and "thorough" and flourished in many other fields, such as education, social welfare and infrastructure, as "the objective is to move the country forward," said Alabi.