The Chinese embassy in the UK sent an open letter to the Daily Telegraph on Saturday, criticizing that the newspaper's report on the imported cases of the Delta variant in China violates "professional ethics of journalism." 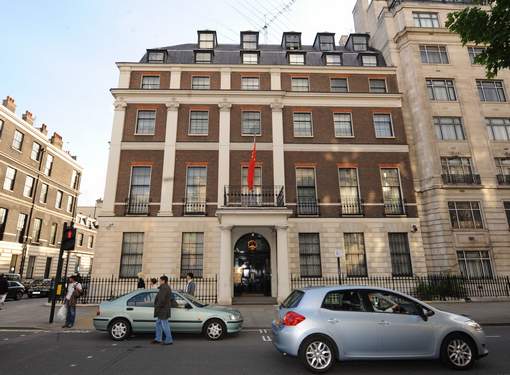 (Photo: the building of the embassy)

The report's author is "ignorant of China's reality" and holds "resentful prejudice and hostility" towards the Chinese people, said the letter.

The open letter came after the newspaper published an article titled "Why the full power of China's surveillance state may not be enough to contain the Delta variant" on August 5. The report's author Sophia Yan accused China of being a "surveillance state" and prejudged the country's political system won't be able to contain the spread of the variant.

The embassy presented basic facts to counter the accusation that measures taken by China are to restrict the freedom of people out of political motives. China has made widely recognized achievements in the early stage of its fight against COVID-19, and a broad majority of the population supports the measures taken by the Chinese government.

"Although those measures are similar to what the United States, the United Kingdom and many other countries are taking to monitor the pandemic, they were defamed by The Telegraph journalist as restricting the freedom of people out of political motives. Why should Sophia Yan descend herself to such distortion of facts when it comes to China?" wrote the letter.

The letter pointed out that besides fighting the epidemic at home, China has been doing its best to support the global endeavor against the pandemic to put into practice "the vision of a community with a shared future for mankind."

China has provided over 200 countries and regions with ample medical supplies, including 224.2 billion face masks, 2.31 billion protective suits, 2.92 billion pairs of surgical gloves and 271,000 respirators. In addition, China has already provided 750 million doses of COVID-19 vaccine to the foreign countries, according to the letter.

As for China's human rights situation, the embassy firmly opposed the accusations in the report and criticized that some Western politicians and journalists' sayings like "genocide" and "forced labor", and "restriction on freedom of religious belief" are "out and out disinformation against China."

The embassy also listed a series of "hard evidence."

In southwest China's Tibet Autonomous Region, the population of Tibet has increased from 1.23 million in 1959 to 3.5 million in 2019, with ethnic Tibetan people accounting for over 90 percent of the region's total and the average life expectancy there reached a record high of 71.1 in 2020, doubling the figure from 1951, according to the official data from the government.

Noting the importance of global solidarity and cooperation in addressing urgent challenges, the letter pointed out that "hypocrisy and vending lies" should stop.

"We strongly urge The Telegraph to show courage to uphold the ethics of fair, objective and balanced reporting, shoulder its social responsibility, and live up to the promise of high-quality journalism since its first issue over 160 years ago," the letter wrote.