Bangkok (People's Daily) - China's engagement and leadership in multilateralism will be vital in a challenging world, Armida Salsiah Alisjahbana, Undersecretary-General of the United Nations and Executive Secretary of the Economic and Social Commission for Asia and the Pacific (ESCAP), said. 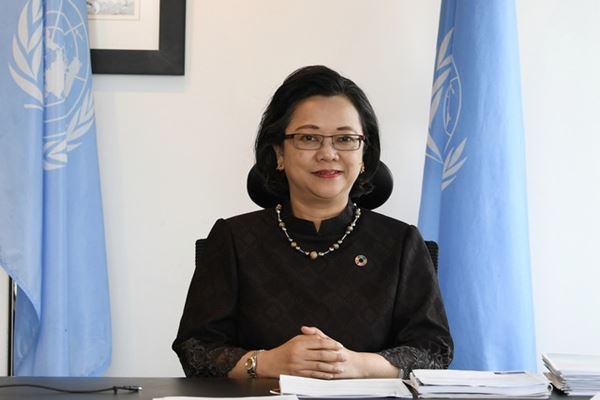 "Over the past 75 years, the UN has committed to working together to maintain international peace and security, uphold human rights and promote socio-economic development. As China's involvement in international affairs has grown, so, too, has its contribution to the United Nations," Alisjahbana said in a written interview with the People's Daily.

Alisjahbana said that since 75 years ago, the UN has helped end conflicts and foster reconciliation by conducting successful peacekeeping operations in dozens of countries. The UN has also promoted socio-economic development, and the past decades have brought unprecedented prosperity in the history of mankind, with millions lifted out of poverty. ESCAP has played a pivotal role for the Asia and Pacific region in this regard.

"Over the past 70 years, and especially during the four recent decades of 'reform and opening up', China's development journey has been phenomenal. It has made a major contribution to poverty eradication, and to the world achieving the Millennium Development Goals. China continues to help power regional trade, investment and growth in our region and beyond, " she said.

Alisjahbana told the People's Daily that in recent years China, has increased its efforts and leadership on climate change, has overseen a drastic reduction in air pollution in major cities, and achieved progress in the fight against desertification.  China has also increasingly engaged in multilateral forums to address pressing development challenges. The establishment of the China International Development Cooperation Administration (CIDCA) signals the growing importance of China in international development cooperation.

"China is now the second largest contributor to the budget of the UN. China is also ESCAP's second largest donor and an active member of the commission engaged in many areas of work of ESCAP, such as connectivity, trade and investment, social development, and environment. " Alisjahbana believes that at ESCAP, China is one of the key member states promoting deeper regional economic integration supported by transport, trade and energy connectivity.

China has committed to connectivity and infrastructure development, including though the Belt and Road Initiative. "The international road transport agreement between the governments of China, Mongolia and the Russian Federation granting traffic rights on the Asia Highway routes is a good example, " Alisjahbana said. China’s expertise in trade facilitation and logistics has contributed to the Framework Agreement on Facilitation of Cross-border Paperless Trade. China is also actively engaged in efforts to develop a regional roadmap on sustainable energy connectivity, she added.

Recently, President Xi Jinping delivered an important speech at the high-level meeting to commemorate the 75th Anniversary of the UN, emphasizing the importance of multilateralism and reiterating his firm commitment to multilateralism.

“Multilateralism and global cooperation are as needed today as they were 75 years ago. ” As she said, even before the COVID-19 pandemic, humanity was facing unprecedented challenges, which required multilateral solutions: addressing the existential threat of climate change and the destruction of the natural environment, managing the profound disruptions brought about by new technologies, as well as addressing widening inequalities, to name a few, all requiring concerted efforts by countries and stakeholders. “The COVID-19 pandemic has now plunged the world into a crisis unlike any other in our lifetimes. Poverty is increasing for the first time in a generation, and the achievement of the Sustainable Development Goals is in jeopardy. As we strive to respond and recover, international cooperation has never been more important."

Alisjahbana said that as one of the first countries in the world to contain COVID-19, China has valuable experience and expertise to share. But China’s role will be even more important in the aftermath of the pandemic, as the region seeks to overcome the socio-economic impact and build back better.

“Whether the region will be able to bounce back and embark on a more sustainable, inclusive and resilient pathway will also depend on China’s commitment and leadership. ESCAP looks forward to a strengthened collaboration with China in advancing the attainment of the Sustainable Development Goals in Asia and the Pacific,” she added.