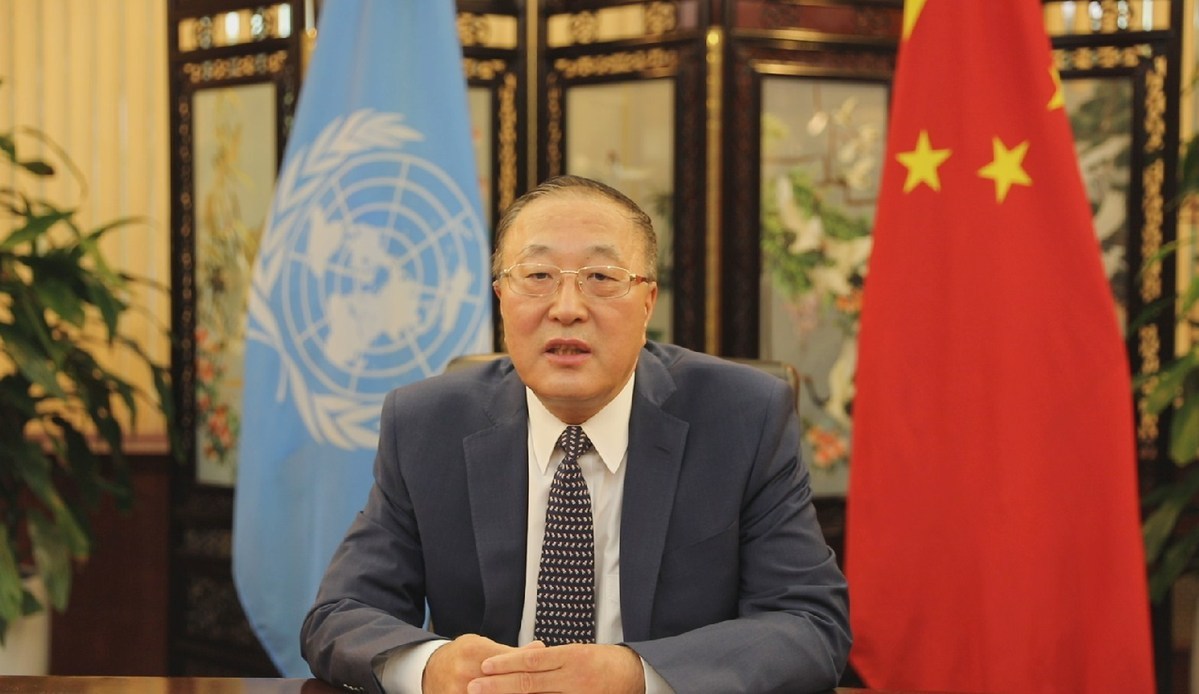 It is of great significance for China to assume the rotating presidency of the Security Council at this historic year, Zhang said in a news briefing.

Zhang reviewed eight achievements the Security Council reached during China's presidency in May.

First, the Security Council reiterated its commitment to multilateralism and clarified the right direction for adhering to true multilateralism, he said.

Zhang emphasized that the only correct way to deal with global challenges is to maintain and practice multilateralism. He noticed that all parties are now emphasizing their support for multilateralism, but unilateral actions and hegemony haven't disappeared.

He mentioned that in a telephone conversation with UN Secretary-General António Guterres on May 6, President Xi Jinping pointed out that the world needs true multilateralism.

The Security Council held a high-level meeting on "upholding multilateralism and the UN-centered international system" on May 7 under China's initiative.

Chaired by China's State Councilor and Foreign Minister Wang Yi, the foreign ministers or deputy foreign ministers of 15 members of the Security Council attended the meeting, setting a record level of attendance for the council's meeting since the pandemic.

Second, the Security Council promoted unity and cooperation to fight the pandemic and supported post-pandemic recovery and reconstruction in Africa, Zhang said.

"Supporting Africa, promoting peace and development in Africa and removing the root causes of conflicts in Africa has always been the priority of China's diplomacy," he said.

The council held a high-level meeting on "Addressing root causes of conflict while promoting post-pandemic recovery in Africa" on May 19.

Chaired by Wang, the meeting drafted the first document of the Security Council on post-pandemic reconstruction, putting forward specific ideas and suggestions on supporting Africa's COVID-19 response, eliminating the root causes of conflict and promoting post-pandemic recovery in Africa.

During the meeting, China and African countries also launched the initiative on partnership for Africa's development, calling on the international community to give stronger support to Africa in multiple areas.

As president of the Security Council in May, Zhang said China pushed the Security Council to meet four times within 10 days to urgently review the Palestinian-Israeli situation, reaffirming a two-state solution and forming a strong voice calling for an immediate ceasefire.

After the ceasefire, with China's full promotion and the joint efforts of all parties, the Security Council issued a presidential media statement, calling on parties concerned to abide by the ceasefire agreement and restore calm in full, Zhang said. It is the first Security Council presidential media statement on the Palestinian-Israeli conflict since 2014.

Fourth, the Security Council improved the safety of peacekeepers and supported the UN to strengthen capacity building, said Zhang.

He said that the Security Council issued two presidential media statements to send out a strong voice condemning the attacks in Afghanistan and the Palestinian-Israeli region, calling for the protection of civilians.