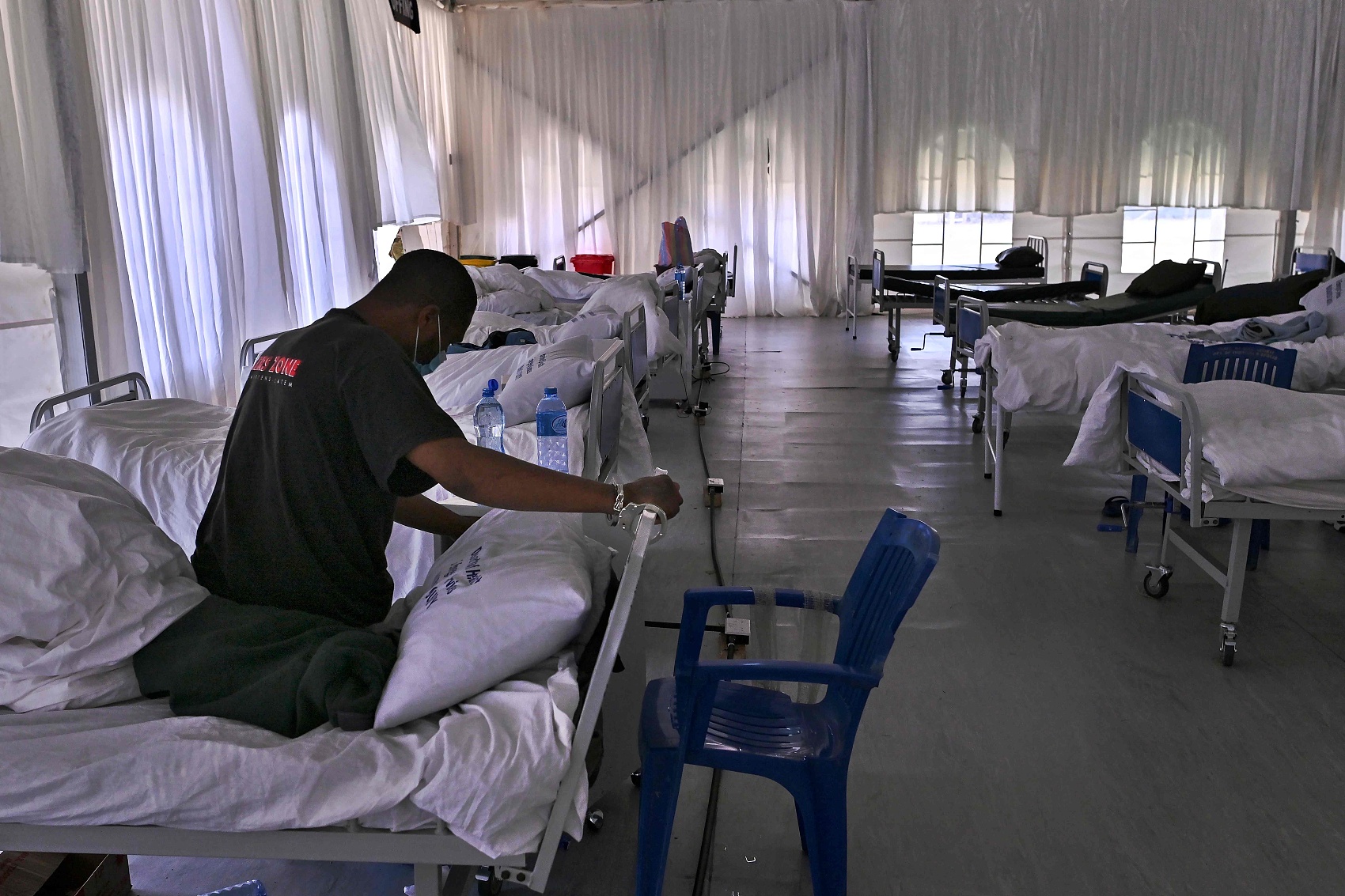 "The nine-month-old baby, Ola, was one of three orphans who suffered from different levels of congenital malformation and malnutrition, and had developed severe COVID-19 symptoms before they were transferred to the hospital," said Zhao, a doctor of the Chinese medical team based in the China-Sierra Leone Friendship Hospital, one of the specialized hospitals to receive COVID-19 patients in the West African country.

"Their conditions were rather critical. All of them coughed continuously and struggled to breathe, and the nine-month-old infant also had two bedsores on his head," said Zhao, adding that doctors concluded that the three severe cases required combined therapies and intensive care following a joint consultation.

"We intensified the anti-infection treatment and enhanced nutritional support to their bodies step by step in the meantime. Their diseases were in remission gradually," said Zhao, adding that the patients fully recovered weeks later on May 29.

"All of the medical staff were exhilarated to see the kids discharged from the hospital, and we also gathered to donate some food and medical supplies to help them get through these trying times," Zhao added.

When the first COVID-19 case was confirmed on the African continent on Feb. 14, China, despite being ravaged by the virus then, rushed to help its African brothers by unreservedly providing medical supplies, sharing experience, as well as sending expert teams.

Amid the ongoing COVID-19 pandemic, China sent a total of 148 medical workers to 11 African countries as of June 2, according to Chinese Foreign Ministry Spokesperson Zhao Lijian.

Furthermore, 46 Chinese medical teams already stationed on site are also mobilized to help African nations contain the pandemic, and nearly 1,000 Chinese medical personnel have been working in Africa for a long time, according to China's National Health Commission.

Since March, massive medical supplies donated by the Chinese government, companies and individuals have also been distributed to about 50 African countries and regions.

The timely donations, including face masks, disposable protective clothing, forehead thermometers as well as other equipment, have helped alleviate the continent's shortage of medical supplies in the face of the epidemic.

Meanwhile, Chinese companies and individuals are also making their own contributions. For example, Jack Ma, Chinese tech entrepreneur and philanthropist, has donated three batches of medical supplies to 54 African countries via the Jack Ma and Alibaba foundations.

According to the Africa Centers for Disease Control and Prevention (Africa CDC), the number of confirmed COVID-19 cases across Africa rose to 1,108,837 as of Sunday, while the death toll climbed to 25,337, with a relatively low mortality rate of 2.3 percent.

Chinese medical workers are shuttling back and forth on the continent to race against the virus, which has won admiration from local officials and medical staff.

"Our doctors and Chinese doctors have been able to work together via virtual media so that the Chinese doctors can share their experience in tackling COVID-19," said the minister.

Cavince Adhere, a Kenyan international relations researcher, said that when the novel coronavirus arrived in Africa, fear and panic gripped the continent.

"China has made significant epidemic control strides to flatten the curve of community transmissions of COVID-19. Because of the proven dexterity of the Chinese system to manage the pandemic, it is no surprise that African countries look to China to help the continent," said Adhere.

Karim Kabineh, chief of the China-Sierra Leone Friendship Hospital, expressed his gratitude to Chinese doctors' contribution to the country's battle against the virus, saying "together with Chinese doctors in the frontline, we firmly believe we will win this fight."

The specialists played a critical role in shaping the continent's response to the disease.

The past months have also witnessed the pairing between leading Chinese hospitals and their African counterparts.

"The collaboration has not only reinforced the longstanding partnership between China and Africa in the medical field. The new impetus brought about by the pandemic also provides a strong springboard to further broaden and cement Sino-Africa ties," said Adhere.

Since 1963, more than 22,000 Chinese health professionals have been sent to Africa to support local programs, having benefited about 220 million patients, according to Chinese Ambassador to Togo Chao Weidong.

"The joint efforts to combat COVID-19 illustrate the enduring relationship between China and Africa," said Adhere.