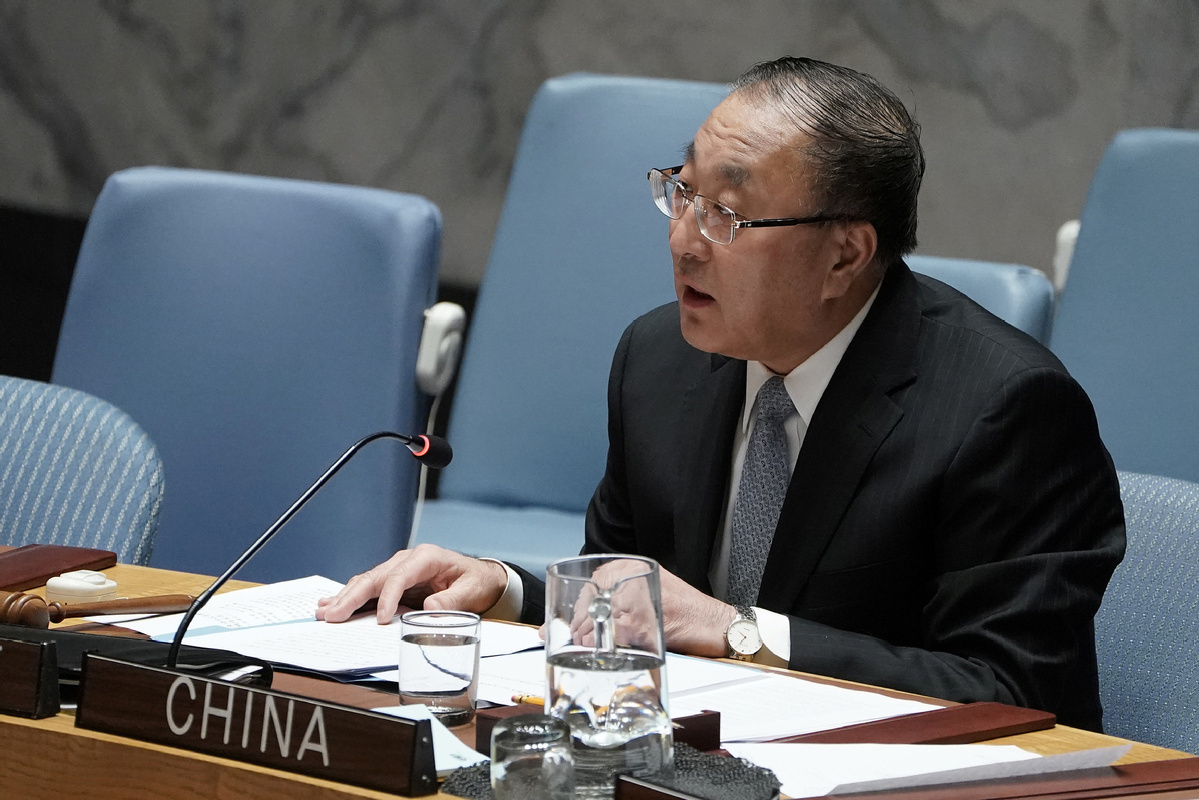 China's top envoy to the United Nations called on the international community Tuesday to act on the Middle East peace process with a sense of urgency.

Zhang Jun, China's permanent representative to the UN, said growing tensions between Palestine and Israel "have put the peace process in jeopardy and heightened the risk of regional conflicts".

"Under such circumstances, the international community must step up its efforts on the Palestinian question and push forward the Middle East peace process with a sense of urgency," he said at a Security Council virtual meeting on the situation in the Middle East.

Zhang underlined that the international community should firmly promote a peaceful settlement based on a two-state solution.

"Independent statehood is the inalienable national right of the Palestinian people, and it cannot be compromised or bargained away," he said.

"We hope that relevant parties will take concrete actions to advance the political process and pave the way for early resumption of peace talks between Palestine and Israel on an equal footing," he said.

Zhang noted that relevant UN resolutions, the "land for peace" principle and the two-state solution set the course for a final settlement.

"They are important parameters in the Middle East peace process and must be observed and reaffirmed," he said.

With a recent escalation of tension on the Gaza Strip, Zhang urged relevant parties to exercise maximum restraint and refrain from any hostile actions that may further aggravate the fragile security situation. He reiterated that the secretary-general's call for a global cease-fire should be heeded.

Zhang said he also noted with concern the increased demolitions of Palestinian-owned structures in the West Bank that lead to more displacement.

"Concrete efforts must be made to implement Security Council Resolution 2334, including ceasing all settlement activities, stopping demolitions and preventing violence against civilians," he said.

"We commend the UN agencies including the WHO (World Health Organization) and UNRWA (United Nations Relief and Works Agency for Palestine Refugees in the Near East) for lending a helping hand," he said. "We call for intensified international efforts to alleviate Palestine's economic and humanitarian difficulties, including through UNRWA."

Zhang said it is "imperative" to end the blockade on the Gaza Strip and allow delivery of humanitarian aid and services to people in need.

"We stand with Palestine to establish an independent state of Palestine that enjoys full sovereignty on the basis of the 1967 borders and with East Jerusalem as its capital," he said.

"China attaches great importance to the Iranian nuclear issue. We are committed to upholding multilateralism, safeguarding the international nuclear nonproliferation regime and maintaining peace and stability in the Middle East," he said.

"It must be pointed out that the JCPOA (Joint Comprehensive Plan of Action) is now faced with severe challenges after the US sent a letter to you to unilaterally and illegally" invoke a snapback mechanism, Zhang said.

"The US is no longer a JCPOA participant. JCPOA participants and the overwhelming majority of council members believe that US demand for restoring UN sanctions on Iran has no legal ground and goes against common views, and the snapback mechanism shall not be deemed as invoked," he said.

"China urges you not to take any action on the US demand. The council should fully respect views of the international community and overwhelming majority of council members, uphold its credibility and authority, and fulfill its responsibility of maintaining international peace and security," he said. "We stand ready to work with other parties to push forward the political settlement of the Iranian nuclear issue."