Zhang Hanhui, the Chinese Ambassador to Russia, accepted an interview with major media of China and Russia on the novel coronavirus pneumonia on February 24. He discussed China’s latest progress on epidemic prevention and control, saying that China has seen encouraging signs. 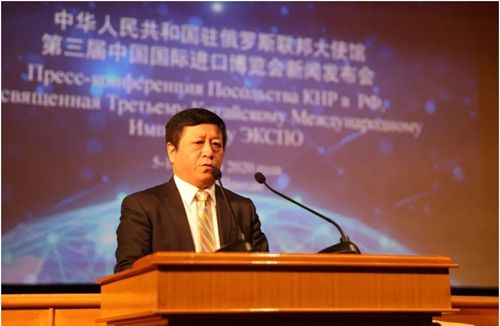 The current facts and data indicated that the epidemic could be controlled and defeated, Zhang said.

Zhang said China could understand the temporary restrictions imposed by the Russian government to control the epidemic. However, he hoped that everyone realize that the novel coronavirus could be prevented and controlled, and would cause far less harm and loss than some influenza viruses would do.

The cooperation between China and Russia in the prevention and control of the epidemic had made initial progress after Russia sent a team of experts to China to jointly develop antiviral drugs and vaccines, Zhang said. The antiviral drug arbidol, developed by scientists of the former Soviet Union, has proven to be effective in inhibiting the virus. In this critical battle of epidemic prevention, China had given full play to the advantages of traditional Chinese medicine, facilitating the special progress on medical treatment.

"We could consider including epidemic prevention and control as well as research and development of vaccines and drugs to 'the years of scientific and technological innovation between China and Russia' that would fall this year and next year, so as to achieve great cooperation by drawing on each other’s strengths," said Zhang.

As for the rumors created and spread by Western media, Zhang pointed out that the political virus was more terrible than the new coronavirus. Some Western media intend to constrain China’s development by distorting facts to bring shame to China. Any attempt to make use of the epidemic will not succeed since the Chinese people would not be afraid of any enemies. Russia was also the victim of similar slanderous remarks. China and Russia should always stand together firmly with vigilance to strengthen political mutual trust, improve friendship, promote cooperation, working together to remove the obstacles on the course of development.