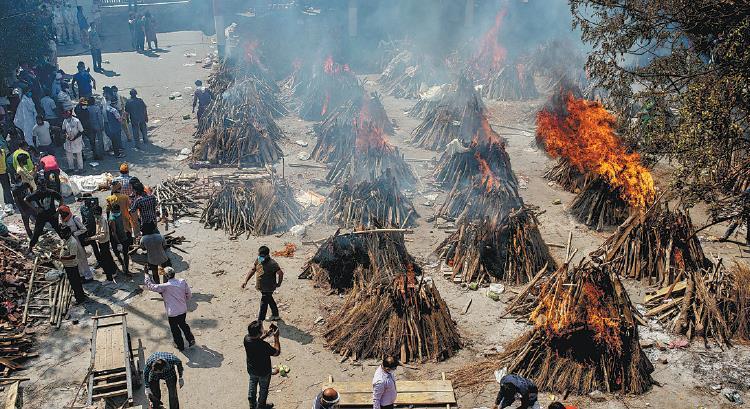 Multiple funeral pyres of victims of COVID-19 burn in an area converted into a crematorium for mass cremations in New Delhi, India, on Saturday. (Photo: China Daily)

With India reeling from a sustained surge in COVID-19 deaths and infections, China has reaffirmed an offer of help to its neighbor.

The country's predicament－starkly illustrated by a record 2,767 deaths reported on Sunday－has been worsened by a US ban on the export of raw materials for vaccine production in India.

In contrast, China's renewed offer of assistance came on Friday, when Foreign Ministry spokesman Zhao Lijian said at a news conference: "China expresses sincere sympathies to India over the deteriorating situation in the country recently.… China is ready to provide support and help according to India's need, and is in communication with the Indian side on this."

India's Ministry of Health and Family Welfare, in reporting the record fatalities on Sunday, said an additional 349,691 infections were logged that day. It was the fourth consecutive day that new infections stayed above 300,000. In all, more than 16.9 million Indians have contracted COVID-19, killing 192,311 of them.

Against the backdrop of the runaway infections, the Indian government on Saturday moved to exempt imports of COVID-19 vaccines from customs duty for three months. The exemption also applies to medical-grade oxygen. The decision came after a meeting that was chaired by Prime Minister Narendra Modi.

The supportive stance of China was underscored earlier by Foreign Ministry spokesperson Wang Wenbin, who told a news briefing on Thursday: "China takes note of the recent grave situation in India with a temporary shortage of anti-epidemic medical supplies. We stand ready to provide India with necessary support and assistance to get the epidemic under control."

Ye Zhixiong, 35, a Chinese national who stayed in Mumbai and Delhi between 2015 and 2020, said his friends in India are very glad to hear about China's help. "We hope to get protective goods and help from China, as we need to live and fight COVID-19," Ye said in quoting a friend, Hamant Kumar, 49, a company director in Mumbai.

In the US, a change of tone toward India was expressed by US Secretary of State Antony Blinken, who tweeted on Saturday: "We will rapidly deploy additional support to the people of India and India's health care heroes."

On Thursday, US State Department spokesperson Ned Price had been blunt when responding to a question on India's request that the US lift the ban on the export of raw materials for vaccine production.

"The United States first and foremost is engaged in an ambitious and effective and, so far, successful effort to vaccinate the American people," Price said.

Earlier this month, the world's biggest vaccine maker, the Serum Institute of India, urged US President Joe Biden to lift the embargo on the exports that was hurting its production of the AstraZeneca COVID-19 vaccine. The coldness of the US State Department drew widespread criticism in India.

A flavor of that came from Aarti Tikoo Singh, foreign and strategic affairs editor at the Indo-Asian News Service, who on Saturday tweeted: "Not surprised at the Biden administration, of whom some of us had predicted, that it'll be as racist, ruthless& imperialistic as previous Democrat govts in the US."

India's health system has been stretched to the limit.

"We are already seeing reports from across the country of shortages in ventilators, oxygen, beds etc," said Ruklanthi de Alwis, senior research fellow at the Viral Research and Experimental Medicine Centre of SingHealth Duke-NUS.

Karori Singh, former director of the South Asia Studies Centre at the University of Rajasthan, said the most important task is to save the medical and health infrastructure from crumbling and persuade people to comply with pandemic protocols.

Amid an oxygen shortage, Mumbai will set up 16 plants at 12 hospitals to produce 43 metric tons of oxygen from atmospheric air daily, the city civic authority said on Saturday.

Solidarity has also been expressed by Pakistan, which has offered to provide products such as ventilators, oxygen supply kits and digital X-ray machines, according to the Pakistani Ministry of Foreign Affairs.