WORLD China stands firmly with Africa in its fight against coronavirus

China stands firmly with Africa in its fight against coronavirus

The COVID-19 is a major public health emergency with fast spreading speed, wide range of infections, and difficult containment. Since the outbreak, President Xi Jinping has personally presided over China's epidemic response and projected calm and confidence.

China has mobilized nationally and responded rapidly, adopted the most comprehensive, rigorous and thorough measures, making concerted efforts and progress in racing against time and fighting against disease.

The outbreak in Hubei province has also been contained with newly confirmed cases in many places returning to zero. Facts show that China has effectively controlled the spread of the epidemic which is completely preventable, controllable and treatable.

President Xi has personally promoted and guided the international cooperation against the epidemic. In the spirit of openness, transparency and responsibility, China has timely shared information and experience with other countries.

China's efforts and commitment have been highly appreciated by the international community. Recently, the China-WHO Joint Expert Mission on COVID-19 released a report after a nine-day field trip to China, fully recognizing China's "bravest, most flexible and most aggressive" prevention and control measures and encouraging other countries to learn from China's successful experience against epidemic. 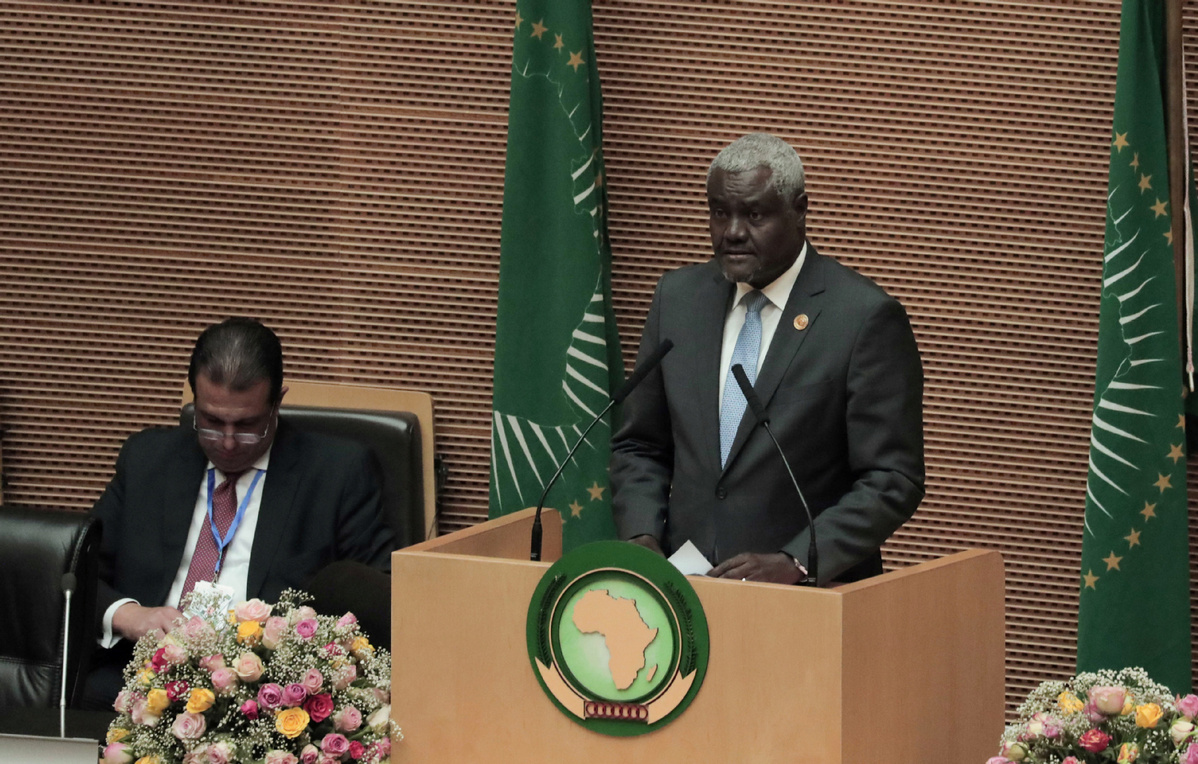 African Union Commission Chairperson Moussa Faki Mahamat addresses the opening of the 33rd Ordinary Session of the Assembly of the Heads of State and the Government of the African Union (AU) in Addis Ababa, Ethiopia, Feb 9, 2020. (Photo: VCG)

AUC chairperson Faki repeatedly expressed his solidarity with Chinese people. Some African students in China volunteered to go to the front line of this battle or worked as volunteers. The unbreakable shared future and profound friendship between African and Chinese is embodied in the action of our African friends. A friend in need is a friend indeed. We will cherish the generosity and brotherhood of Africa and keep them in mind forever.

Now the epidemic outside China has become severe with the COVID-19 spreading to more than 70 countries including several African countries. China is worried about and feels the same for what African people suffering now. "Amity between the people holds the key to sound state-to-state relations".

Just as China helped Africa to cope with Ebola in 2014, we will never be absent when African countries need us. Mission of China to AU is attaching great importance to the disease prevention and control cooperation with AU related organs, keeping close coordination with them and updating the latest information.

Embassies of China to African countries are also guiding all Chinese in Africa to cooperate with local prevention and control work, requiring people who just came back from China to do self-quarantine for two weeks.

China has provided the first batch of testing kits to AU and will offer more medical supplies soon. We will also promote the implementation of healthcare initiative among "eight major initiatives" of FOCAC, the construction of African CDC and cooperation in the field of public health and disease control between China and Africa.

The COVID-19 is a common challenge for humanity. It is yet undetermined where the virus originated. Wherever its origin may be, China and all the other affected countries are victims faced with the challenge in containing its spread.

Standing at the forefront of the fight, China has served as a strong line of defense against the spread of the epidemic for the world. Human society shares a future where everyone has a stake. Globalization connects us which requires cooperation and joint response of the international community including African countries in fighting the epidemic.

The author is the ambassador and head of the Chinese Mission to AU.