DAKAR, Nov. 30 (Xinhua) -- China and Tanzania are willing to deepen bilateral ties, Chinese State Councilor and Foreign Minister Wang Yi and Tanzanian Foreign Minister Liberata Mulamula said during their meeting here on Monday on the sidelines of the 8th Ministerial Conference of the Forum on China-Africa Cooperation. 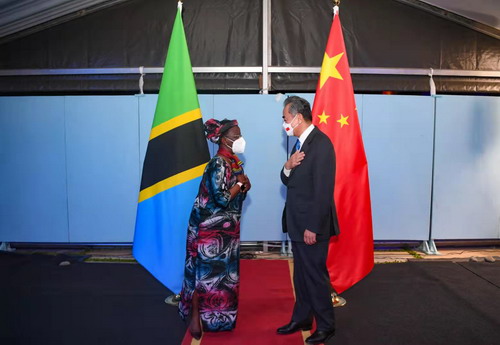 China-Tanzania friendship was personally created and nurtured by the older generation of leaders of the two countries and has grown stronger as time goes by, Wang said, adding that President Xi Jinping chose Tanzania as the first stop of his visit to Africa after taking office, which fully demonstrates the importance of Tanzania in China's diplomacy with Africa.

China, Wang said, is willing to, under the guidance of the important consensus reached by the two countries' heads of state, take the ministerial conference as an opportunity to forge further unbreakable China-Tanzania relations.

Mulamula extended warm congratulations on the centenary of the founding of the Communist Party of China (CPC) and the 50th anniversary of the restoration of the lawful seat of the People's Republic of China in the United Nations, and also warmly welcomed the important initiatives announced by Xi on cooperation with Africa at the opening ceremony of the forum.

Noting that Tanzania and China are good friends and true friends that enjoy firm historical ties, she said Tanzania is willing to further consolidate the unity and friendship with China, and continue to firmly support China on issues concerning China's core interests and major concerns.

Tanzania, Mulamula said, is looking forward to further deepening bilateral cooperation on infrastructure, economy and trade, and exchanging governance experience with China, so as to achieve better development of Tanzania.

Wang said that China comprehensively reviewed the glorious course and valuable experience of the CPC in the past 100 years at the sixth plenary session of the 19th CPC Central Committee and is more confident in realizing the second centenary goal.

The whole CPC is united as "a strong piece of steel," the Chinese people of all ethnic groups are united as one, and the Chinese nation has entered an irreversible historical process of great rejuvenation, Wang said.

Noting that China has successfully trailblazed a path of socialism with Chinese characteristics, Wang said that China will not export its development pattern, but is willing to provide useful references for countries expecting to speed up development while maintaining independence.