Local authorities in China will assist some overseas Chinese who live in parts of Italy hit hardest by the coronavirus outbreak and in dire need of help to get back to China, a source told the Global Times. 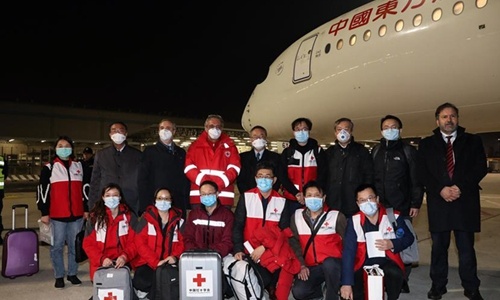 A temporary charter flight may be arranged to bring them back to Wenzhou, East China's Zhejiang Province soon, the source said, without specifying the exact time for the trip and the number of such flights that may be planned.

A senior member of the Rome-based Wenzhou Overseas Chinese Association shared a notice with the Global Times, which reads that a charter flight will depart from Milan to Wenzhou on Sunday at 18:50. The post said the plane will arrive in Wenzhou on Monday afternoon, with business class tickets going for 3,625 euros for adults and 2,772 euros for children, and economy class charging 2,660 euros for adults and 2,027 euros for children.

People who are qualified to apply for the flight are those above 70 years old and minors under 10 years old. One child can be accompanied by one adult and the plane can carry 200 people, the notice reads.

A staff member from the Wenzhou Federation of Returned Overseas Chinese confirmed with the Global Times on Sunday that the plane is a commercial charter flight.

Xu Xiaolin, head of the Qingtian Clansmen Association in Italy, told the Global Times that he advised local governments in China that some overseas Chinese who have contracted the virus and are in critical condition be transferred to China for treatment.

Wenzhou city and Qingtian county administrated under the city of Lishui are major hometowns for overseas Chinese in Italy. Media reports said more than 300,000 Chinese people from Zhejiang live in Italy.

Even though Qingtian people living overseas have been told to reconsider returning to China, some still have tried to return via third countries, Xu said.

Yi Gu, a Chinese national who is studying in Italy's worst-affected Lombardy region, told the Global Times that Chinese people in Italy found it difficult to receive treatment in the early stages of the outbreak, and were not admitted into hospitals in the worst-hit regions.

A Chinese student surnamed Shen who is studying in Rome said the situation improved after some of them contacted the Chinese embassy and Chinese organizations in Italy for help.

Yi said some Chinese in her region organized commercial charter flights to go back to China, which costs roughly 2,000 euro per person.

Shen said that many parents of Chinese students are negotiating with China Southern Airlines and Hainan Airlines to launch commercial charter flights to send their children back home.

"Apparently, the airline companies want to get at least 100 passengers for one charter flight," said Shen.

The local government has enforced strict measures to prevent the spread of the virus in Qingtian through imported cases. On February 28, Qingtian authorities began arranging service teams to shuttle its residents from airports in Shanghai, Hangzhou, and Wenzhou. New arrivals in Qingtian are quarantined for 14 days.

On Friday, Italy recorded 250 novel coronavirus deaths, the highest in one day, according to official data released by the country's health department. So far, Italy has reported 21,157 infections overall and 1,441 deaths.

Trucks carrying 26.4 tons of coronavirus prevention supplies arrived in Italy on Friday, the first batch of supplies donated by Chinese people from Zhejiang. A nine-member team of Chinese medical experts, together with tons of medical supplies, arrived at Rome's Fiumicino Airport on Thursday night as part of the Chinese government's efforts to help Italy fight the coronavirus pandemic.