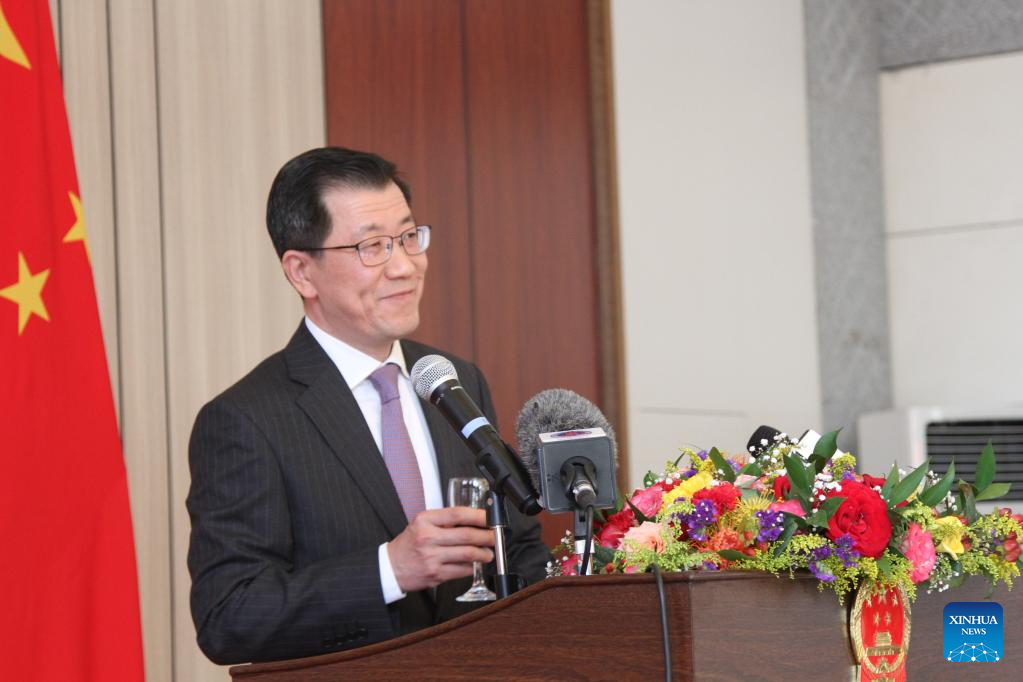 Chinese Ambassador to Zimbabwe Guo Shaochun attends a reception to mark the 73rd anniversary of the founding of the People's Republic of China at the Chinese Embassy in Harare, Zimbabwe, on Sept. 30, 2022. China will continue to support Zimbabwe's economic and social development and improve its capacity for self-generated development, Chinese Ambassador to Zimbabwe Guo Shaochun said on Friday. (Photo: Xinhua)

China will continue to support Zimbabwe's economic and social development and improve its capacity for self-generated development, Chinese Ambassador to Zimbabwe Guo Shaochun said on Friday.

Guo made the remarks during a reception held at the Chinese Embassy in Harare to mark the 73rd anniversary of the founding of the People's Republic of China.

"On the new journey of the great rejuvenation of the Chinese nation, China will make new contributions to mankind's well-being and continue to share new opportunities with the world as it achieves new development," he said.

Guo said as a responsible major country, China is committed to the path of independent and peaceful development of other nations.

"Our cooperation will adhere to recipient-driven approaches, and respect the independent choices of the Zimbabwean government and Zimbabwean people," he remarked.

He added that China will continue supporting Zimbabwe to achieve greater progress in economic and social development.

In addition, he said cooperation between Zimbabwe and China will follow the principles of openness and transparency.

"Our cooperation will always stay open and inclusive," said Guo.

On intergovernmental cooperation, Guo said various major infrastructure projects undertaken with China's aid covering all sectors of the economy have been completed, and have already started bearing fruits.

"These projects have improved infrastructures that are urgently needed by Zimbabwe for promoting economic development and people's livelihood," he said.

"The Protocol of Phytosanitary Requirements for Export of Zimbabwean Fresh Citrus to China signed last year is one of the policies supported by China in promoting the export of Zimbabwe's agricultural products. It aims to establish green lanes for Zimbabwean agricultural products into the Chinese market, marking a breakthrough of China's policy support in assisting Zimbabwe's economic development," he said.

On behalf of Zimbabwe's Foreign Affairs and International Trade Minister Fredrick Shava, Minister of Justice, Legal and Parliamentary Affairs Ziyambi Ziyambi, made a speech, applauding China for standing up with Zimbabwe in its developmental path.

"We have witnessed increased investments in Zimbabwe by Chinese companies over the past few years. The Chinese business community has transferred technical expertise and created employment opportunities for thousands of our people," said Shava in a written statement.

Shava acknowledged China's efforts in building Zimbabwe's human resource development. In addition, he said Zimbabwe will continue working with China in pursuit of a new global order that respects sovereignty and multilateralism.

Shava expressed gratitude to China and Chinese enterprises in Zimbabwe for extending assistance in Zimbabwe's fight against the COVID-19 pandemic.