WORLD China to continue to welcome US companies to Chinese market: ambassador

China to continue to welcome US companies to Chinese market: ambassador

Washington (People's Daily) - Qin Gang, Chinese Ambassador to the US, attended on Monday the virtual welcome event hosted by the US-China Business Council. He reiterated that it is hoped that necessary conditions and atmosphere can be created for the implementation of the phase one agreement and bilateral economic and trade exchanges, rather than making things worse. 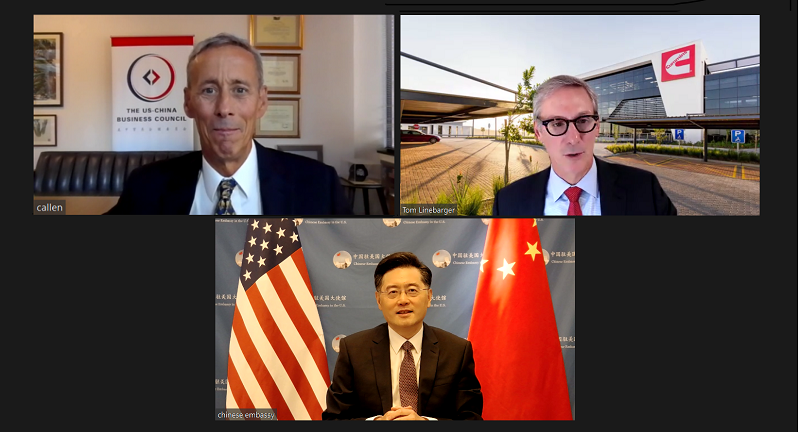 Ambassador Qin Gang attends the virtual welcome event hosted by the US-China Business Council on September 13. (Photo: Embassy of China in the US)

USCBC Chairman Tom Linebarger, President Craig Allen and some board members participated in the event. The USCBC expressed its commitment to China-US friendly exchanges and bilateral economic cooperation.

Qin said that China's economy enjoys a good momentum and bright prospects. Since the beginning of this year, it has maintained a steady and upward trend. In the first six months, it registered a year-on-year growth of 12.7%. Foreign trade grew by 27.1% and paid-in foreign investment increased by 28.7%. According to the IMF, China’s contribution to world economic growth will exceed one-fourth for the next five years.

“China will continue to be the source of confidence, growth and hope for world economic recovery in the post-pandemic era. China’s high-quality development in the new stage and for a new paradigm will provide a broader market to foreign investors, including American businesses,” he added.

Qin pointed out that China will build a market-oriented, law-based and world-class business environment. China has been shortening the negative list for access of foreign investment for four years in a row. The latest list only has 33 items. For those areas outside the list, domestic and foreign investments are treated equally. When China joined the WTO, China pledged to open 100 services sectors, and has committed another 22.

“We have removed all the foreign ownership caps in the manufacturing sector and agriculture, and the opening of the services sector, including the financial industry, is also picking up speed. Several days ago, President Xi Jinping announced that we will extend the negative list for trade in services across the country, explore the development of national demonstration zones for the innovative development of trade in services, and establish a Beijing Stock Exchange to support the development of innovation-oriented SMEs,” he said.

Qin stressed that the Chinese government’s policies and measures are to define what is allowed and what is not, and create a fair and law-based market environment. This will make our policies more predictable. At the same time, the Chinese government will carry out an extensive study and solicit people’s opinions before introducing a new policy.

Qin said that according to the latest survey of USCBC, uncertainties caused by difficulties and challenges facing China-U.S. relations has been most worrisome to the American business community. If we compare China-US relations to a giant ship, then economic and trade cooperation has been its ballast and propeller. When the ship sails against heavy winds and huge waves, we need to add more strength to the ballast and propeller. China’s economy is promising, its market potential is huge, and its door of opening-up will only open wider. China will continue to welcome American companies to explore the Chinese market. To be frank, the difficulties and uncertainties in China-US trade and business cooperation are not from China.

“I hope that the US will meet with China halfway, follow the principles of mutual respect, equality and mutual benefit, and make earnest efforts to improve China-US relations,” said Qin.

Qin said that as a show of sincerity, China has been faithfully implementing the agreement despite the pandemic, and has made progress in enhancing IPR protection and expanding market access to agricultural products and the financial sector. At the same time, China has eliminated market-based tariffs on imports from the US to facilitate trade.

However, since the agreement came into force, the US has continued to impose sanctions and restrictions on China, including putting more than 900 Chinese entities on various lists of restrictions. This has directly affected Chinese companies' ability and willingness to purchase from the US and has had a negative impact on the implementation of the agreement. The US business community is concerned about China’s future tariff exclusions policy. Recently, US media reported that the Biden administration was considering launching a Section 301 investigation into the subsidies of China. Neither Section 301 investigations nor the tariff war has worked. The US business community must be aware of this from first-hand experience. It is hoped that necessary conditions and atmosphere can be created for the implementation of the phase one agreement and bilateral economic and trade exchanges, rather than making things worse.

Qin reiterated his commitment as Chinese Ambassador to the US to acting as a bridge and bond between the two countries and working extensively with US business community to be a good listener and helper, so as to uphold and promote the common interests of China and the US.