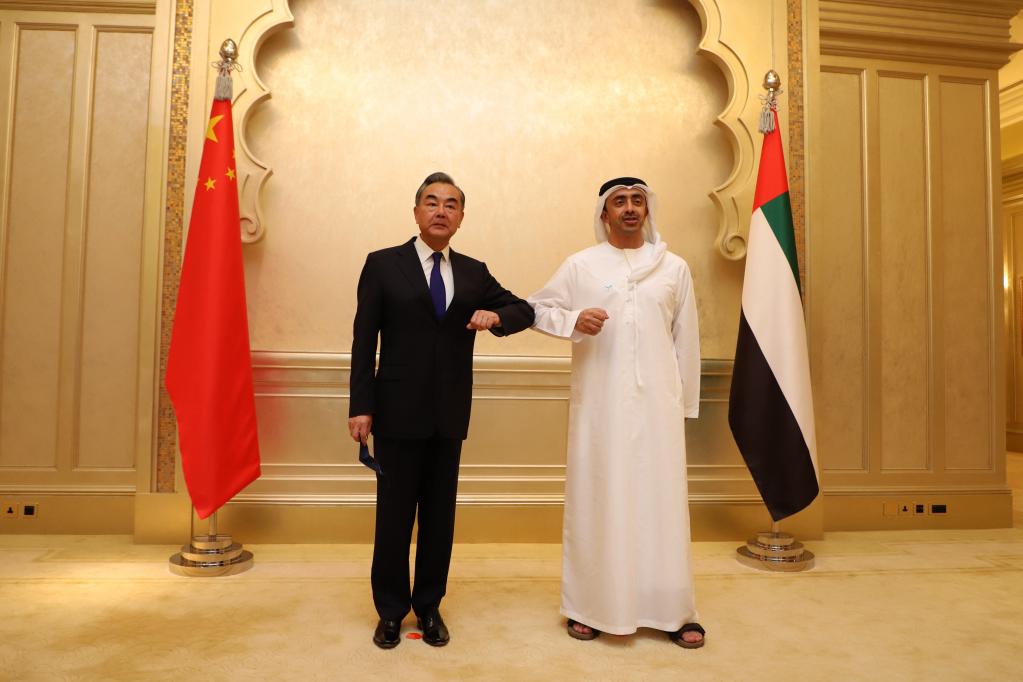 Noting that the two peoples are "good friends, good partners and good brothers," Wang stressed that the relations between China and the UAE are based on high level of mutual trust and deep-rooted traditional friendship. The strong friendship and mutual trust between the heads of the two states provide a solid guarantee for the continuous development of the China-UAE relations.

China supports the UAE in safeguarding its national security and stability, independently exploring a development path in line with its own national conditions, combating religious extremism, and playing a positive role in international and regional affairs, Wang said.

He said that China appreciates the UAE's strong support on the issues concerning China's core interests.

The phase-3 trial of the COVID-19 vaccine, jointly carried out by China and the UAE, has set a record for multi-nationality and large-scale clinical trials, and made important contribution to promoting international anti-coronavirus cooperation, the Chinese diplomat said, adding that China is willing to continuously innovate the models and expand the scope of cooperation with the UAE.

Wang said that China is willing to work with the UAE to enhance connectivity of the Belt and Road Initiative and the UAE's 50-year national development plan, expand mutually beneficial cooperation in such fields as energy, high and new technologies, finance and investment, and jointly promote international mutual recognition of health code.

The two sides also need to strengthen cooperation in anti-terrorism and de-radicalization, Wang said, adding that China will offer full support for the UAE to host the World Expo in Dubai and will work with all parties to ensure the success of the 2022 Beijing Winter Olympic Games.

China and Arab states have reached an agreement on jointly proposing a data security cooperation initiative, indicating that both sides are willing to actively participate in formulating the rules of the global digital economy, the Chinese diplomat said.

China has put forward a five-point initiative for achieving security and stability in the Middle East, and hopes that regional countries will uphold the spirit of independence, explore a security framework that meets regional needs, and find a development path that suits their national conditions, Wang added.

For his part, Sheikh Abdullah said the Chinese people should be proud of China's remarkable development achievements and its success in containing the COVID-19 pandemic, adding that the UAE is also proud of having such a strategic partner as China.

He expressed the UAE's support to the one-China policy, China's endeavors to safeguard the diversity of world civilizations, and China's leading role in promoting global common development.

The UAE hopes to deepen its cooperation with China in the fields such as health, agriculture, science and technology, tackling climate change, and preventing desertification to achieve mutually beneficial results, the UAE diplomat said.

He said the UAE is willing to work together with China to combat terrorism, and in particular, to make more efforts in the field of de-radicalization, so as to safeguard peace and stability in the Middle East.

Sheikh Abdullah also expressed the hope that the two sides will further coordinate and cooperate in the UN affairs. He said that the UAE appreciates China's active participation in the Dubai World Expo and supports China in hosting the Beijing Winter Olympics.

Additionally, the two sides reached an agreement in principle on the health code's mutual recognition. After the talks, the two ministers took part in an online ceremony to launch a joint vaccine liquid bottling production line. Enditem