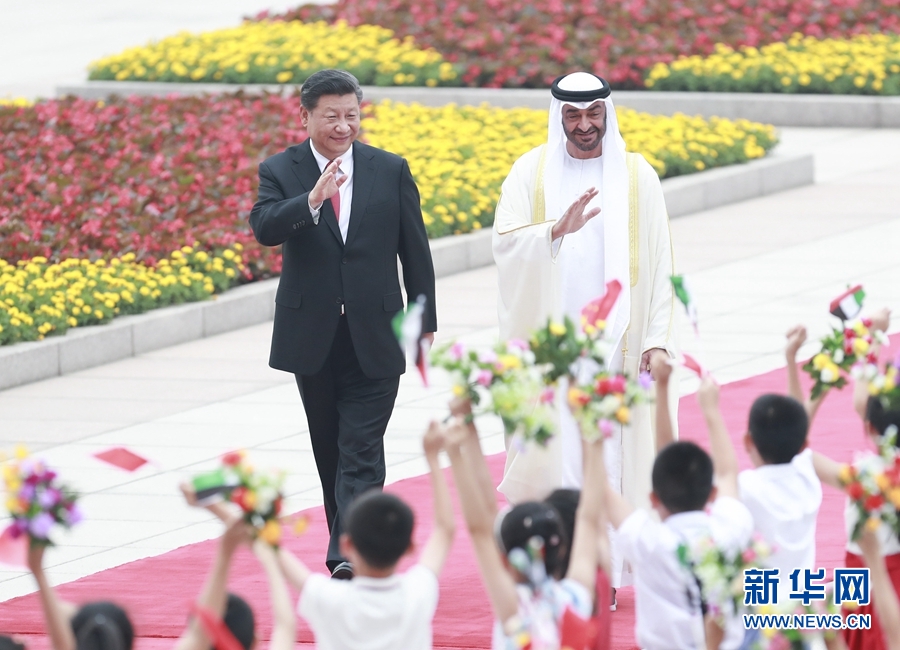 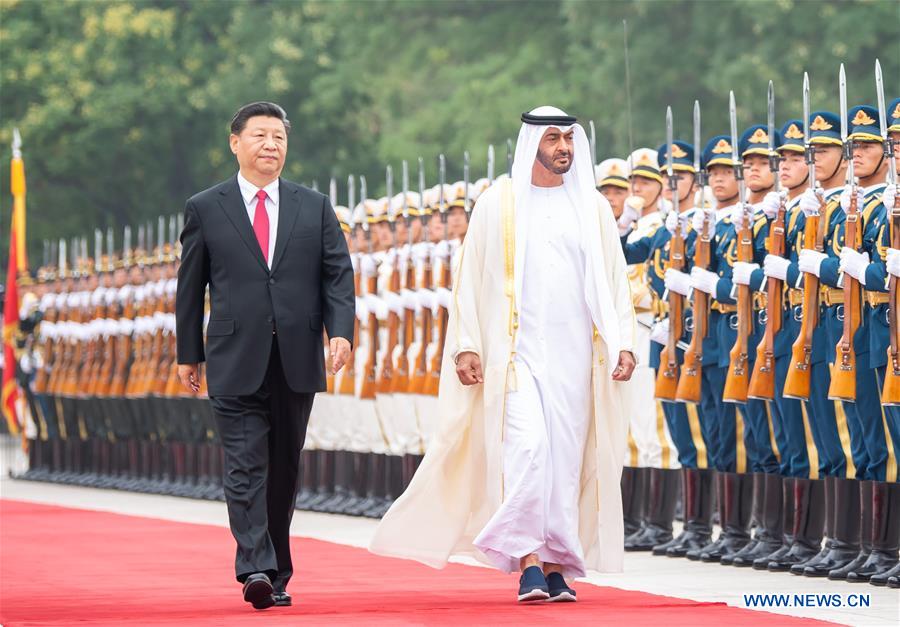 During their talks at the Great Hall of the People, Xi recalled his state visit to the UAE last July when the two sides announced the establishment of the partnership and ushered the bilateral ties in a new stage.

Stressing the significance of win-win cooperation in the era of globalization, Xi said the China-UAE relationship has set an example of strategic cooperation for countries from different regions, with different cultures and of various types.

According to Xi, the two sides will issue a joint statement on strengthening the China-UAE comprehensive strategic partnership during the crown prince's visit, "which will be another important guideline document in the history of China-UAE relations."

Xi said he is willing to work together Sheikh Mohammed to ensure the partnership will yield new results to better benefit the people of the two countries under the current complicated and volatile circumstances.

Calling for further political mutual trust and strategic communication, Xi said China regards the UAE as an important strategic cooperative partner in the Middle East and supports the latter's efforts to safeguard its national sovereignty, security and development interests as well as its increasing role in regional and international affairs.

The Chinese side stands ready to step up coordination and cooperation with the UAE to safeguard the international system with the United Nations at the core, uphold the international order based on international laws and multilateralism, fairness and justice, and advance the building of a community with a shared future for humanity.

On Belt and Road cooperation, Xi called on both sides to strengthen the alignment of development strategies, make sure the Khalifa Port Container Terminal Two and the China-UAE Industrial Capacity Cooperation Demonstration Zone a success and play an exemplary role, and consolidate and expand strategic cooperation in the energy sector.

The Chinese president voiced the hope to realize the goal of 200 billion U.S. dollars of the two-way trade by 2030.

During the talks, Xi said China supports the UAE in opening Chinese-language teaching in its 200 schools.

On anti-terrorism and security cooperation, Xi expressed gratitude for the UAE's support on Xinjiang-related issues and showed China's firm support for the UAE's efforts to fight religious extremists.

Stressing the significance of peace and stability in the Gulf region for the Middle East as well as for the whole world, Xi said the region should be an "oasis of security" rather than a new "source of turmoil."

China backs the UAE's commitment to regional peace and stability, Xi said, calling on all sides concerned to stay calm and exercise restraints, and refrain from opening a "Pandora's box."

"(All sides concerned) should, on the basis of mutual respect, resolve disputes and conflicts through dialogue and consultation," said the president.

"China is willing to work with the UAE as well as the international community to contribute to safeguarding peace and stability in the Gulf region," Xi said.

For his part, Sheikh Mohammed said the UAE gives priority to deepening the comprehensive strategic partnership with China in its foreign policy and that his country will always be the best strategic cooperative partner of China no matter how the international situation changes.

Lauding the great contribution of the Belt and Road Initiative to regional connectivity and world economy growth, Sheikh Mohammed said the UAE is willing to actively participate in the initiative, play a more prominent role in it and discuss with China on cooperation in the third-party markets.

The UAE stands ready to expand investment in, energy supply for and trade volume with China, and boost finance, aviation, and cultural and people-to-people exchanges with China, said the crown prince, noting that the UAE will support science and technology cooperation with Chinese companies.

The UAE is highly appreciative of China's efforts to protect the rights of ethnic minorities, and promote ethnic unity and harmony, Sheikh Mohammed said, adding that his country will boost security cooperation with China, and jointly fight terrorist and extremist forces including "East Turkestan" to safeguard national security and regional tranquility.

The UAE supports the great initiative of building a community with a shared future for humanity proposed by President Xi, appreciates China's responsible policy in international affairs, especially in the Middle East and Gulf region, and welcomes China's bigger role in maintaining peace and stability in the Middle East, Sheikh Mohammed said.

After the talks, the two leaders witnessed the exchange of a series of cooperation documents between the two sides.

Prior to the talks, Xi held a red-carpet ceremony to welcome the visiting crown prince.

Later Monday, Xi met with Sheikh Mohammed again. Xi said their talks Monday morning were fruitful and very successful, and they witnessed the exchanging ceremony of a number of bilateral cooperation agreements, which have rich content and cover wider fields.

Xi said the huge number of cooperation agreements reflected that the bilateral ties are rich in content and have a strategic nature.

Xi said that Chinese civilization has been lasting for more than 5,000 years while absorbing various foreign civilizations and continuously developing in an inclusive manner. The Belt and Road Initiative is aimed at promoting exchanges and cooperation between different countries.

The Chinese president called on the two countries to jointly promote dialogues among civilizations and push for steady development of China-UAE comprehensive strategic partnership, to make new contributions to world peace, harmony and common development.

Sheikh Mohammed agreed with China's proposal of jointly building a community with a shared future for humanity, and expressed the readiness to deepen the comprehensive strategic partnership between the two countries.