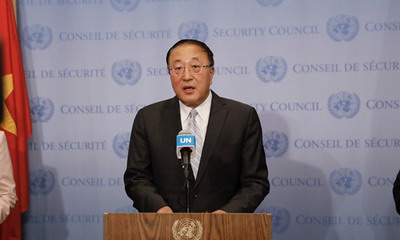 United Nations (People’s Daily) - The 75th session of the General Assembly urgently examined the Palestinian-Israeli conflict on Thursday. China's Permanent Representative to the United Nations Zhang Jun attended the meeting to present China's position as the president of the Security Council and recapped the council’s response to the fighting in Gaza.

Zhang stated that in the last couple of weeks, Palestinian-Israeli violence has escalated to its most severe state in recent years. China has expressed grave concerns over the development and urged the international community to take urgent action to end the current crisis and prevent the situation from spiraling out of control across the board. The Security Council bears the primary responsibility for the maintenance of international peace and security. Since the recent outbreak of Palestinian-Israeli conflict this time, China has worked closely with council members as president of the council for this month to overcome difficulties, holding four council meetings and having proposed a draft that presented a statement to urge parties to cease hostilities and ease tensions as soon as possible.

On May 16, State Councilor and Foreign Minister Wang Yi presided over a council open emergency meeting on the Israeli-Palestinian conflict, showing a commitment to the council's role to end the current crisis. Both Palestine and Israel, including the relevant regional organizations and countries, attended the meeting. The meeting sent out a strong message. A great majority of council members called for the immediate cessation of hostilities, demanded civilian protection measures, supported a just solution to the question of Palestine on the basis of the two-state solution, and agreed that the council should fulfill its charter duties.

China commends the great majority of council members for their efforts and urges the relevant member to demonstrate its sense of responsibility. Despite the difficulties, China will continue to support the council in taking actions, remaining united and speaking with one voice, and working with the international community in an unremitting, unrelenting effort to end the current crisis and find a just solution to the Palestinian question. In view of the current situation, China made several proposals.

Zhang said that first, both parties must cease hostilities and violence immediately to avoid more civilian casualties. Days of conflicts have caused heavy casualties among Palestinian civilians, including many women and children, some as young as several months old. There have been many casualties among Israeli civilians as well, and the use of force cannot produce a fundamental solution.

To answer violence with violence will only beget more hatred. China condemns all violence against civilians, opposes all violence-inciting rhetoric and calls for the immediate end of hostilities and violence. Israel in particular should exercise restraint since facts, however, repeatedly shown that no so-called precise strike can avoid civilian casualties. China supports the United Nations, relevant regional organizations and countries in their diplomatic and mediation efforts for an early ceasefire.

Second, UN resolutions should be earnestly implemented to protect the legitimate rights and interests of the Palestinian people. Building settlements in the occupied Palestinian territories is gravely in violation of international law and undermines the prospects of a two-state solution. The issue of settlement is a core topic for the negotiations on the final status of the Palestinian problem. It must be properly resolved before the two sides can improve mutual trust so the Middle East can break free from a vicious cycle.

China calls on Israel, in line with UN resolutions, to stop building settlements on the occupied Palestinian land, stop evicting Palestinian families, halt the demolition of Palestinian houses, and stop casting violence on the Palestinians so the rights of the people in the occupied territories can be legitimately protected. The historical status of the holy sites in Jerusalem's Old City must be maintained and respected.

Third, China hopes to see efficient measures implemented to prevent humanitarian disasters. The mutually-compounding effects of conflict, pandemic and blockade have further aggravated the very fragile humanitarian situation in Gaza as reflected in the power shortages, the lack of medical resources and the mass displacement of civilians.

China calls upon the conflict parties to observe international humanitarian law, stop attacking civilian facilities, especially hospitals and schools, and cease military operations in civilian areas. Israel should lift the blockade on Gaza and facilitate the access of humanitarian supplies to the area immediately. Since the conflict has led to the destruction of many civilian houses in Gaza, the international community should step up support for reconstruction in Gaza and relieve the hardships of the local people.

Lastly, China urges the redoubling of efforts to promote peace talks to establish a two-State solution. The root causes of the repeated eruption of conflict between Palestine and Israel is the fact that the Middle East peace process has been off track and UN resolutions are not effectively implemented. In particular, Palestine’s right to independent statehood has been persistently infringed upon, and the two-state solution is not yet a reality on the ground. After 70 years, an independent state remains an unrealized dream for Palestinian people. China supports all efforts conducive to the realization of the two-state solution.

To achieve this end, the international community, especially countries with influence on the parties, should play an active role. As a sincere friend of the Palestinian people, China firmly supports Palestine’s just demands and the establishment of a fully sovereign, independent Palestinian state by its people on the basis of 1967 borders with East Jerusalem as its capital. China will continue to make efforts toward this endeavor.