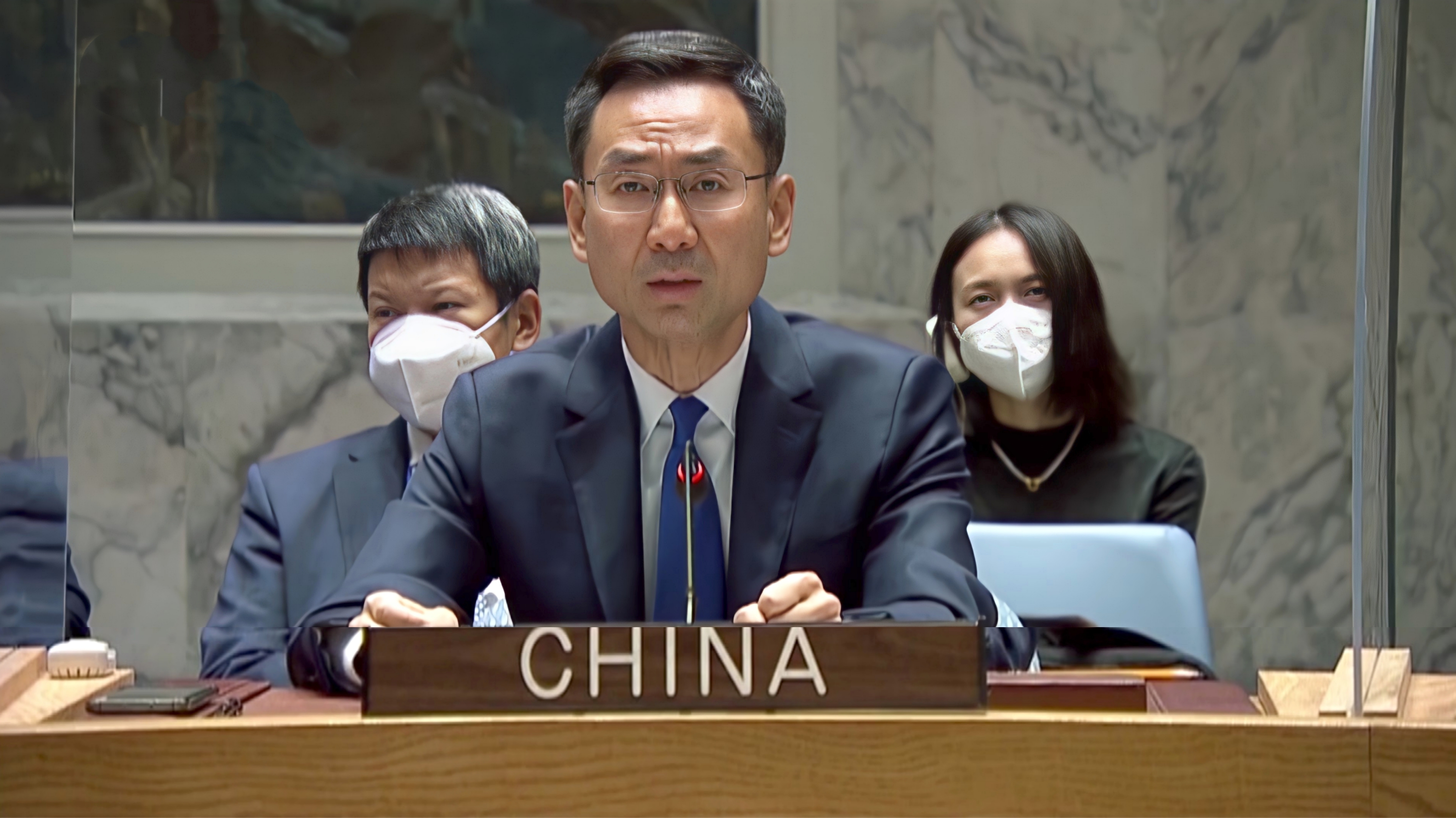 China's deputy permanent representative to the United Nations, Geng Shuang, on Friday called on the international community to build a balanced global and regional security architecture, while saying China will protect its own sovereignty at all costs.

"Putting one's own security above that of others, attempting to strengthen military blocs, establishing absolute superiority, and even shaping the surrounding environment of other countries according to their own standards will only lead to conflict and confrontation, divide the international community, and make themselves less secure," he added.

Talking about the challenges facing the world, the envoy said that "in an era of changes and challenges, no country can deal with them alone, and no country is insulated."

He said that at a time when the international community is in dire need of unity and cooperation to overcome the difficulties together, it is extremely irresponsible and dangerous to cling to the Cold War mentality and bloc politics, to promote decoupling, to erect barriers, to politicize, instrumentalize and weaponize economic and trade exchanges to coerce other countries to take sides, and to deliberately create division and confrontation.

"The international community should be highly alert to this counter current and resist it together," he said. "We must not let the crisis of Ukraine kick off a new Cold War. We must not repeat the mistakes of history. We must not let humanity experience once again the unbearable scourge of war."

Referring to the importance of upholding the UN Charter, Geng said that "as the legal cornerstone of today's international order, the UN Charter is irreplaceable in its role and unshakable in its status. Compliance with the purposes and principles of the UN Charter should be consistent, with words matching with deeds, instead of saying one thing while doing another, not to mention double standards or selective application."

On China's position and will to safeguard its own sovereignty, the envoy said that "while some country has repeatedly emphasized the principle of sovereignty over the issue of Ukraine, it has incessantly challenged the sovereignty of China over Taiwan and even deliberately created tensions in the Taiwan Straits."

"China is resolute and firm as rock in its will to safeguard national sovereignty. No one should underestimate the determination and ability of more than 1.4 billion Chinese people to defend its national sovereignty and territorial integrity. I hope the country concerned will see this clearly and not play with fire," he stressed.

On the two agreements on shipping grain out of Ukraine and the export of Russian food and fertilizers, Geng said China welcomes the deals.

In the meantime, he said China commends UN Secretary-General Antonio Guterres and all parties concerned for the positive role they played.

Geng stressed that since the outbreak of the Ukraine crisis in February, "China has been taking an objective and impartial approach, and proceeding from the historical perspective and the merit of the issue itself."

"We made our efforts in a responsible way to mitigate the spillover effect of the crisis, and will continue to play an active, constructive role in stabilizing international trade and world economic order," the envoy noted.