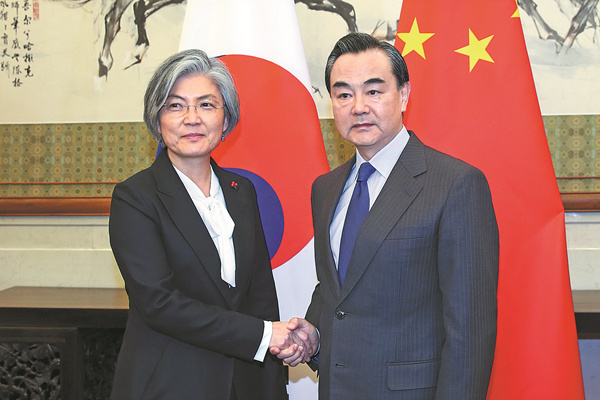 Foreign Minister Wang Yi has used the Chinese saying "commitments must be honored" in urging Seoul to make sustained efforts to tackle the issue of deployment of a US anti-missile system in the Republic of Korea.

Wang made the comment when meeting with his ROK counterpart Kang Kyung-wha in Beijing on Wednesday amid public focus on progress in handling the US Terminal High Altitude Area Defense system, which has X-band radar capable of covering part of China.

China attaches great importance to Seoul's recent pledges, including that it will not join a US-led anti-missile network, it will allow no additional deployments of THAAD, and it has no intention to damage China's security interests, according to Wang.

Kang is making her first China visit after taking office in June, shortly after the two sides arrived at a consensus on some points in tackling THAAD, according to a joint statement on Oct 31.

Kang told Wang on Wednesday that Seoul greatly cherishes the joint statement, and it is working to repair the two nations' ties at an early date.

Wang said both countries should boost mutual understanding, minimize their differences and create conditions for fully restoring the development of their relations.

The two sides should take the 25th anniversary of the bilateral ties' establishment as well as future high-level exchanges as opportunities to sum up lessons and do strategic planning for the future development of ties, Wang said.

Kang said the ROK is ready to act on the joint release and the latest consensus of the leaders, further boost high-level interactions, and promote cultural and people-to-people exchanges.

Ruan Zongze, vice-president of the China Institute of International Studies, said Seoul should seriously turn its latest pledges regarding THAAD into actions so as to boost two-way efforts in repairing the ties that plummeted for more than a year and to seek further improvement.

Also on Wednesday, the two ministers talked about the Korean Peninsula situation.

China and the ROK have common interests in achieving denuclearization of the peninsula through dialogue and consultation and in maintaining the peninsula's peace and stability, Wang said.

Both sides should continue to strengthen strategic communication and make active efforts to that end, Wang added.

Kang said pressuring Pyongyang and imposing sanctions are not the ultimate goal, and all parties should work together to resolve the DPRK nuclear issue through dialogue and negotiation.