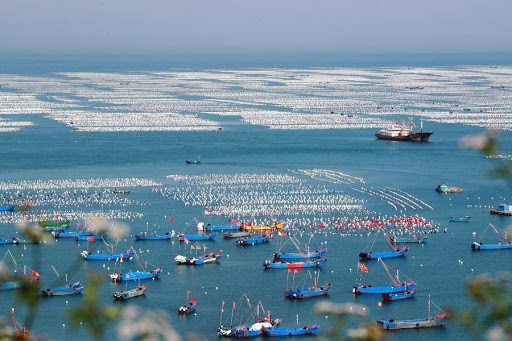 UNITED NATIONS, Aug. 9 (Xinhua) -- China on Monday called for upholding the concept of a maritime community with a shared future.

"Maritime security cooperation should uphold the concept of a maritime community with a shared future," Dai Bing, charge d'affaires of China's permanent mission to the United Nations, told a Security Council meeting on maritime security.

"The blue planet humans inhabit is not divided into islands by the oceans, but is connected by the oceans to form a community with a shared future. The peace and tranquility of the ocean is important for the common security of all countries, and requests the joint efforts by all," he noted.

"At present, a few countries are pursuing exclusive regional strategies in the Asia Pacific region and attempt to create an intensifying maritime conflicts, undermine the sovereignty and security interests of relevant countries, and weaken regional peace and stability. This runs counter to the aspirations of most countries in the region to seek peace, cooperation and development," the envoy added.

"China calls on all countries to strengthen dialogue and exchanges on maritime issues, deepen pragmatic cooperation, and work together to respond to various maritime security threats and challenges on the basis of mutual respect, equality, and enhanced mutual trust," said Dai.

The ambassador pointed out that maritime security cooperation should follow the international law.

On other aspects of maritime security cooperation, the envoy stressed that efforts must be made to serve the economic and social development of coastal countries and continue to focus on combating piracy.

"Maintaining maritime security is of great significance to promoting world peace, stability, development and prosperity. At present, COVID-19 is still raging around the globe. Regional conflicts continue unabated. Criminal activities such as piracy, armed robbery, human and drug trafficking at sea, and maritime weapon smuggling are rampant, all of which have further destabilized relevant regions," he said.

The Security Council on Monday held a videoconference open debate on maritime security. The meeting, which is one of India's signature events during its August presidency, was chaired by Indian Prime Minister Narendra Modi.