China urged the United States to stop politicizing COVID-19 origins-tracing and hopes the international community can work together to resist the backlash of politicization and bring the origins study back to the right track of scientific cooperation, Foreign Ministry spokesperson Wang Wenbin said Wednesday. 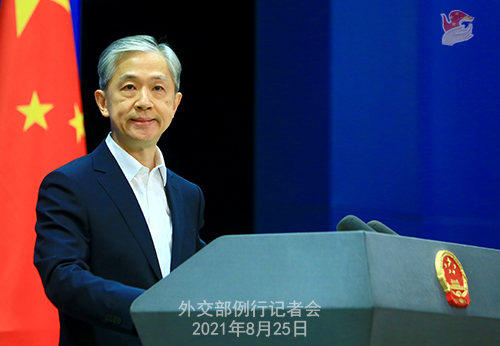 Wang was responding after Chen Xu, Permanent Representative of China to the UN Office at Geneva and other International Organizations in Switzerland, on Tuesday wrote to WHO Director-General Tedros Adhanom Ghebreyesus, and submitted two non-papers and an open letter signed by more than 25 million Internet users calling for an investigation into the Fort Detrick base.

The conclusions and recommendations of the China-WHO joint study report have been recognized by the international community and the scientific community, and must be respected and implemented. Future global origins studies should and can only be carried out on this basis, Wang noted.

Wang stressed that the Wuhan Institute of Virology (WIV) has twice invited WHO experts to carry out joint research on origins-tracing and made great efforts to this end. It is extremely unlikely that the novel coronavirus was leaked from the WIV, which is the clear conclusion of the China-WHO joint study report.

“Those who insist that the possibility of a lab leak cannot be ruled out should investigate Fort Detrick and the University of North Carolina in the principle of fairness and justice,” he pointed out.

Wang added that the international community and the American people have long raised serious concerns over the illegal, non-transparent and unsafe practices at the Fort Detrick base. After the institute was shut because of serious safety incidents in 2019, a disease with symptoms similar to that of COVID-19 broke out in the US. “The US has not yet given any explanation on these problems to the international community and American people,” he said.

“As for the University of North Carolina, the US has been falsely accusing the WIV of causing the COVID-19 pandemic with its coronavirus researches. However, it is the US who has sponsored and carried out more such researches than any other country,” said Wang.