China-US Alaska dialogue 'could still be meaningful' despite tough opening 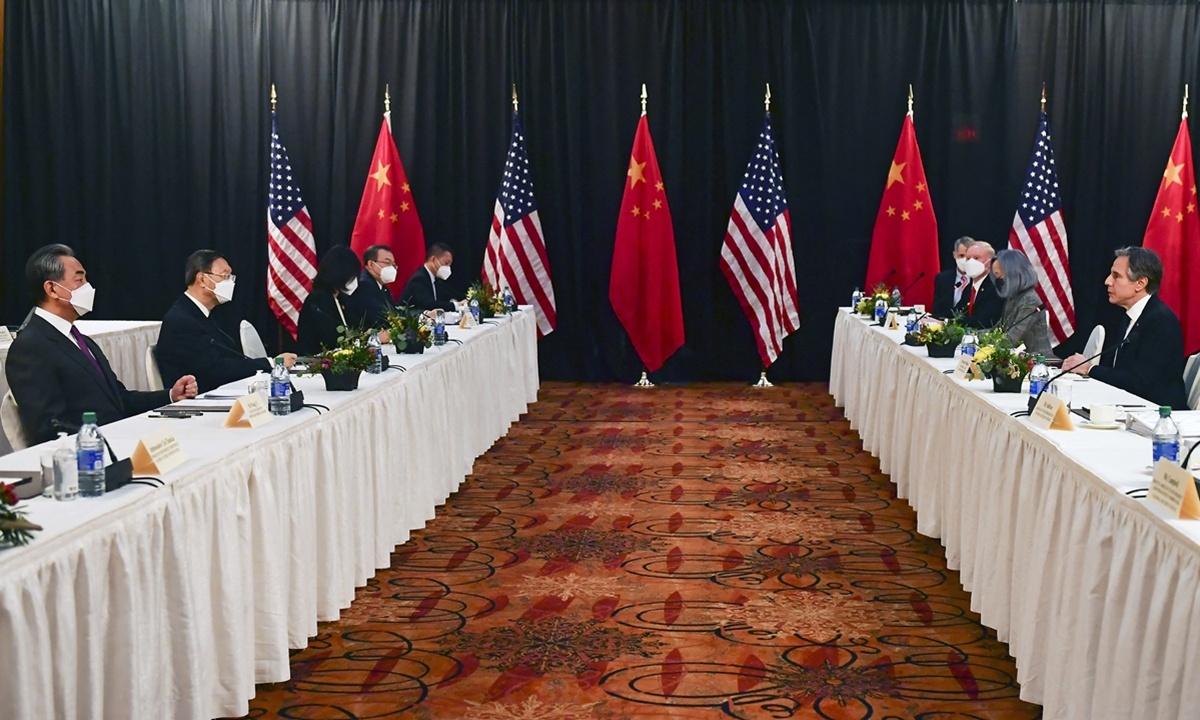 The China-US high-level strategic dialogue in Anchorage, Alaska started intensely due to the US behavior without hospitality and diplomatic etiquette, and China’s chief diplomats’ tough response that impressed observers worldwide shows that China is not there to compromise on key issues and hear lectures, but to point out the US problems face-to-face and find solutions with sincerity.

Although the opening was tough, the world can still expect some progress from the two days of difficult dialogue. When speaking in front of the media, US officials would like to show off their toughness to cover their anxiety as they know the US is declining and they don’t want to show what they really want from China, so in the following meetings without media presence, the two sides will be able to have more productive and constructive conversation, analysts said.

Climate change, which the US needs cooperation from China, will be raised by the US, and regional hot spot issues like the Korean Peninsula nuclear issue and the Iranian nuclear deal could also be mentioned, said Chinese experts, noting that the both sides used to have much more intense talks since they started the ambassadorial talks in 1955. So, China has the patience and confidence to continually shape bilateral ties. 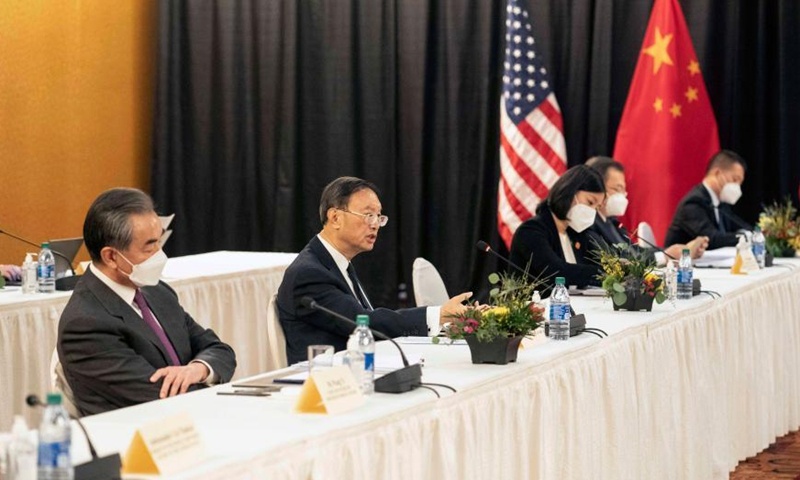 “However, when delivering opening remarks first, the US side seriously overran the agreed time and provocatively launched groundless attacks and accusations against China's domestic and foreign policies. It is not the proper way of hosting guests, nor is it compatible with diplomatic protocol, and the Chinese side solemnly responded,” Chinese officials said during the briefing.

According to video released by Chinese and US media, after Chinese diplomats finished their opening remarks, US Secretary of State Antony Blinken and National Security Advisor Jake Sullivan asked the reporters to stay and added one more round of remarks, which largely extended their time of speaking, and then US officials asked the media to leave while Chinese officials were trying to respond.

Yang Jiechi, a member of the Political Bureau of the Communist Party of China (CPC) Central Committee and director of the Office of the Central Leading Group for Foreign Affairs, was seriously offended and asked the US officials “Why are you afraid of having reporters here?”

Chinese delegates have overestimated the manners of the US, Yang said to US officials, noting that “We thought the US would follow the necessary diplomatic protocol … In front of the Chinese side, the US side is not qualified to speak to China from a position of strength,” as Blinken and Sullivan finished their remarks to attack and accuse China’s internal and external affairs.

“Even 20 or 30 years ago, the US was in no position to speak to China from a position of dominance, because Chinese people wouldn’t buy it. If you want to get along with us, let’s deal with each other based on mutual respect,” Yang stressed.

Chinese State Councilor and Foreign Minister Wang Yi said China-US relations have encountered unprecedented difficulties as China's legitimate rights and interests have been unreasonably suppressed. It harms the interests of the peoples of the two countries as well as world stability and development, Wang said, adding that the situation "should not be continued."

"The old habit of the US hegemonic behavior of willfully interfering in China's internal affairs must be changed," Wang said. 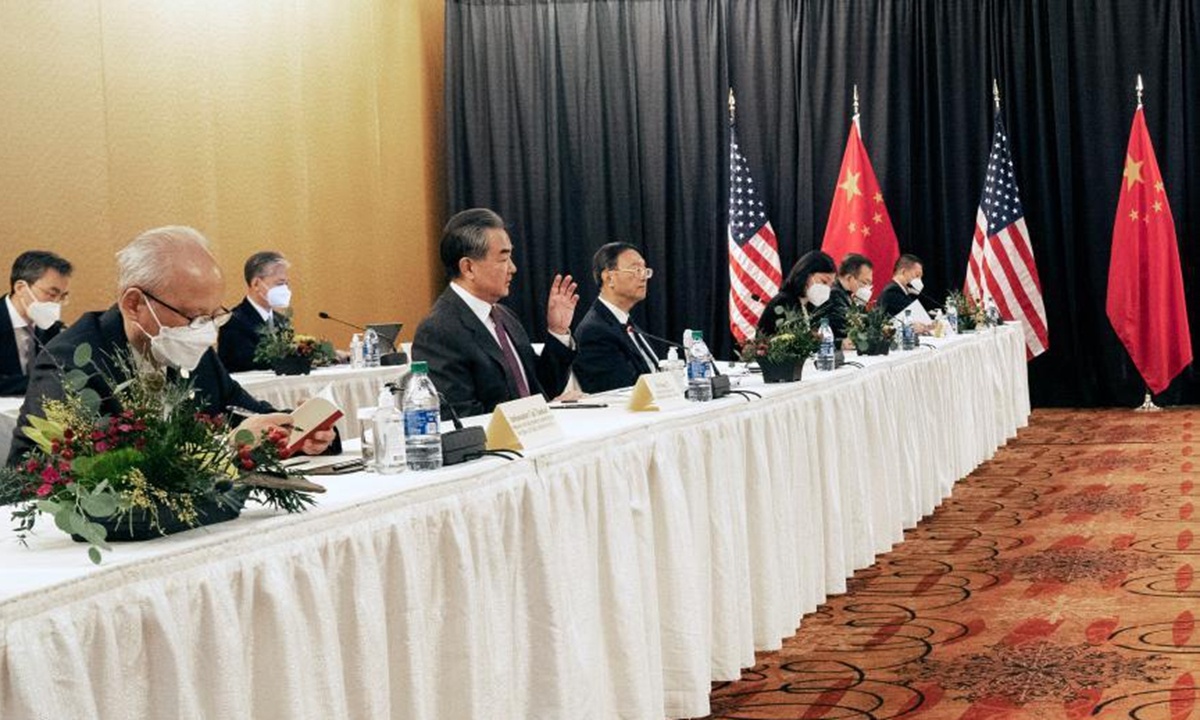 “Normally the side with weakening strength or influence will play tough first to cover its anxiety, and this is why US officials were being rude,” but they have underestimated Chinese diplomats’ experiences and confidence, Lü Xiang, a research fellow on US studies at the Chinese Academy of Social Sciences in Beijing, told the Global Times on Friday.

In response to Yang’s criticism over US problems like racial problem and launching wars worldwide, Blinken argued that “we’re not perfect…But what we’ve done throughout our history is to confront those challenges openly, publicly, transparently…sometimes it’s painful, sometimes it’s ugly, but each and every time, we have come out stronger, better, more united as a country.”

Lü said the reality in the US at this moment might be against what Blinken said. The US is not getting better or more united, and the diplomatic team of the Biden administration is even unwilling to correct the mistakes made by the Trump administration.

“The US is being very petty, and totally unlike a respectable major power. It plays small tricks, such as announcing sanctions against China ahead of the meeting, and even naively believing they could bully China into submission. What does the US want from this meeting? Just to humiliate China and reach nothing productive?” said Diao Daming, an expert on US studies at Renmin University of China.

Wang Dong, an expert on China-US relations at Peking University, said that the hard-line response of Chinese delegates is like “a heavy strike on the head” to deter US officials from being arrogant, to make sure the two sides are equal in this dialogue.

“To make the opening intense is good for China. This could eliminate the illusion in the US mind that it can pressure China into compromise by being rude,” he said, adding that Yang and Wang’s remarks also show sincerity and hope to bring the ties back to the right track instead of merely playing tough.

The two-day dialogue won’t just be about wrangling, and the chief diplomats of the two sides should pay efforts to find solutions to problems and reach common ground to overcome mutual challenges, said experts.

Yang Xiyu, a former Chinese diplomat and senior research fellow at the China Institute of International Studies in Beijing, told the Global Times that Blinken made extra remarks out of concerns that he would be lashed out fiercely by his domestic audiences if he did not.

Yang Xiyu said that China and the US made their opening remarks based on different standards and international rules, and China's were based on peaceful coexistence and noninterference in internal affairs, while the US' were based on putting human rights over sovereignty.

The two countries should set up a new rules-based communication mechanism, rather than the rules established during the colonial period, to make future talks effective, He said.

For example, Blinken accused China of espionage, but the US failed to offer any evidence. The two sides should also set up rules on cybersecurity issues, including actions and criteria recognized by both on investigating evidence, Yang Xiyu said.

Climate change is an issue that the Biden administration desperately needs support from China, Diao said, adding that the Korean Peninsula nuclear issue and the Iranian nuclear deal, as well as other regional hot spots issues will also get mentioned. But topics like trade and tariffs are unlikely to be touched on because there is no official in charge of such matters in the meeting.

“We should not be overly pessimistic about the dialogue despite the tough opening. In 1955, when the two sides just started ambassadorial talks with each other, the divergences and wrangling were much more intense than today, and we eventually improved China-US ties, so we should be patient. China is much more powerful than in the 1950s, so we should be confident to continue the talks and actively shape bilateral ties,” Diao noted.