Trade consultations between China and the US are going smoothly and the two sides are moving the talks forward, with more phone calls planned, despite the cancellation of the APEC summit in Chile, where an interim trade deal was widely expected to be signed, according to Chinese officials and experts on Thursday. 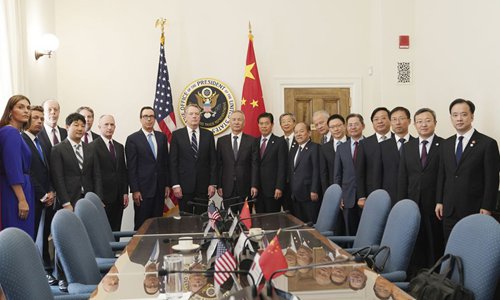 Chinese Vice Premier Liu He, also a member of the Political Bureau of the Communist Party of China Central Committee and chief of the Chinese side of the China-US comprehensive economic dialogue, attends a new round of high-level economic and trade consultations together with US Trade Representative Robert Lighthizer and Treasury Secretary Steven Mnuchin in Washington DC, the US, on October 10. (Photo:Xinhua)

Chile's decision to scrap the APEC summit sparked widespread concern about the fate of the first phase of the trade agreement between China and the US, particularly in the US, where officials and businesses appear more anxious to sign the deal to end the costly trade war, analysts noted.

In China, officials seem to be cool-headed and more focused on the negotiation process and analysts argued that, though the cancellation adds more work to the two teams, the most important thing is to first agree on a balanced deal.

Following much speculation overnight, the Chinese Ministry of Commerce (MOFCOM) issued a brief statement on Thursday, stressing that the two sides had been keeping close contacts and "the consultation work is progressing smoothly."

"The two sides will continue to push forward consultations and other works as planned," read the statement, adding that leaders of the two negotiating teams will talk on the phone on Friday.

Geng Shuang, a spokesperson for the Chinese Foreign Ministry, also echoed the MOFCOM statement at a press briefing on Thursday, but noted that leaders of the two countries remain in contact through "various means."

Though MOFCOM did not mention the APEC episode, it was apparent that the statement was aimed at quelling concerns over the trade consultations, analysts noted.

As negotiators continued to make "positive progress" in recent talks, the two sides were widely expected to sign the first phase of the trade agreement when the leaders of the two countries were supposed to have met on the sidelines of the APEC summit as originally planned.

"Certainly, that will have some impact on the arrangement because it means the two teams now have to find an alternative location on top of consultations over the text of the deal," Song Guoyou, director of Fudan University's Center for Economic Diplomacy, told the Global Times on Thursday.

"We look forward to finalizing Phase One of the historic trade deal with China within the same time frame," Hogan Gidley, a spokesman for the White House, said in a statement on Thursday. "We're awaiting potential information on another location."

However, reaching a balanced deal is more important than finding a location for the signing of the trade deal, said He Weiwen, a former senior Chinese trade official and an executive council member of the China Society for World Trade Organization Studies.

"The easy part is to change the location; the most important part is to reach an agreement," he told the Global Times on Thursday.

The White House statement and widespread speculation in the US media underscored a great sense of urgency among US officials and the public to reach a trade agreement with China, as the trade war continues to weigh on businesses and economic growth.

US economic growth further slowed to 1.9 percent year-on-year in the third quarter, down from 2 percent in the second quarter and 3.1 percent in the first quarter, according to official US data on Wednesday.

"[The White House] cannot fight two wars at the same time," said a Beijing-based observer, who spoke on condition of anonymity, referring to the US-initiated trade war with China and the political fight within the US, where President Donald Trump faces impeachment. "There is almost no chance [for Trump] to be elected, [without a deal]," he noted.

On the Chinese side, while actively pushing forward a trade deal, officials are more pragmatic and calm after having fought for more than a year, said Huo Jianguo, vice chairman of the China Society for World Trade Organization Studies.

"If the US wants to sign a deal, then China welcomes it; however, the precondition is that the deal would have to be balanced," Huo told the Global Times on Thursday, adding that if the US wants to reach a deal, it should show "more sincerity" instead of undercutting the talks.

Huo noted that even as they are anxiously trying to reach a deal with China, US officials, including US Vice President Mike Pence and US Secretary of State Mike Pompeo, have in recent days continued to smear China and interfere with China's internal affairs related to the island of Taiwan, Hong Kong SAR and the Xinjiang Uyghur Autonomous Region.

"This does not help in any way to ease tensions between the two sides," he said.