China and the United States have agreed on the text of a phase one trade agreement, which covers areas including intellectual property rights protection, food and agricultural products purchase and access to financial markets. The U.S. has agreed to cancel tariffs on Chinese imports step by step, as was announced by China's State Council Information Office on Friday night. 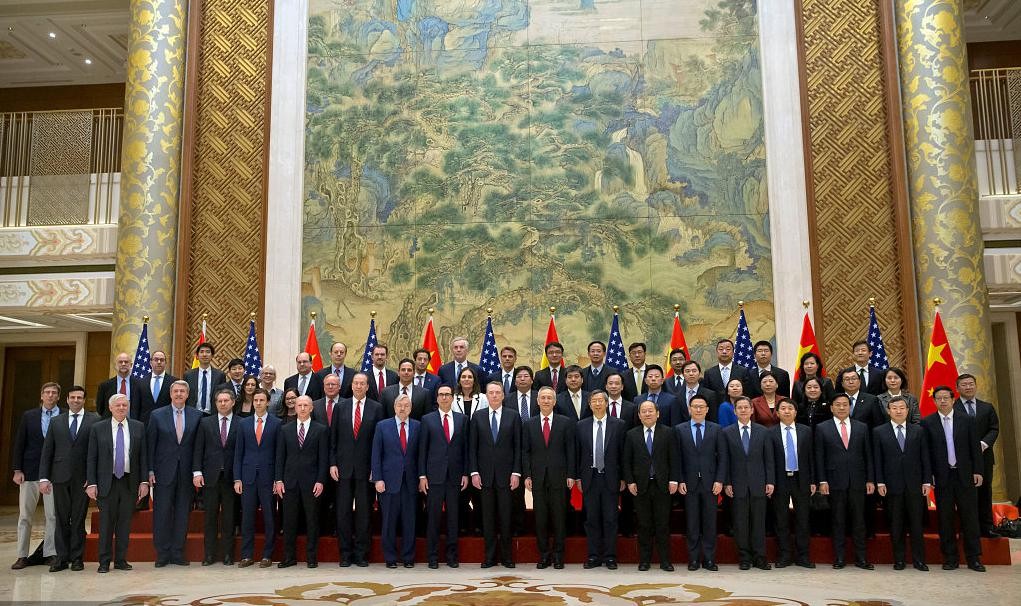 A group photo of members of the U.S. and Chinese trade negotiation delegations at Diaoyutai State Guesthouse in Beijing, China, February 15, 2019. Photo: CGTN

Trump stated from October that he was aiming for a "phase one" agreement and he has sealed it. Although the President is notorious for his U-turns and unpredictability, he set a bar on this outcome and stuck to it albeit with compromise. This means that for the first time the trade war is actually de-escalating. Markets and investors will be relieved.

Even though disagreements remain, nobody can seriously argue that the alternative - a no-deal - would be better. Only pragmatism, along with fair and balanced negotiating can move the process forwards.

The announcement of this deal was a matter of "when", rather than "if". All official rhetoric over the past few months pointed towards Trump being serious about getting something. Why so? The 2020 election is looming. The President had long pledged to achieve certain goals from the trade war in his first term and needed to show results, especially with the significant impact that repeated escalation would have upon U.S. growth, investment and consumerism. His personal political position has also weakened, with the House of Representatives pushing ahead for an "impeachment" vote.

So, he coined a "phase one trade deal" with China, accepting the pragmatic reality that making serious progress with Beijing was best done through a "step by step process"- with the idea of pushing them to outright capitulation not only impossible, but self-destructive. Notably, his negotiating priorities have revolved around immediate short-term interests.

This agreement will allow him to claim victory, and thus remove political and economic pressure on him in the run up to next year's election. But, what does it offer moving forwards? This is where some voices have been skeptical, with one national council on foreign relations describing it as a "supply and purchase" agreement at best, with many issues of disagreement standing between the two countries and the path to how they will move on from this unclear.

Nevertheless what is most important about this deal is that it represents the first significant and in-practice pledge to de-escalate the trade war, thus stabilizing any potential fallout between the two countries. Trump has never agreed to reduce or remove tariffs before, and this is a positive in Beijing's perspective. Every past window of negotiations ended with Trump choosing escalation, thus giving this one an atmosphere of uncertainty and unpredictability.

However, what the White House will choose to do from here remains to be seen. They may aim to advance further, or simply take a position and kick the can down the road. Undoubtedly Trump will continue to make demands, but any way forward must once again consist of balanced, fair and reciprocal negotiations which respect the interests of both parties. It appears that at least for now, the political realities surrounding Trump has forced him to accept this.

Therefore as a whole, this deal can be counted as a progressive step forwards, but not a conclusion. The de-escalation of the trade war is a much welcome advance that should be heralded by all parties, but it is likely to serve only as a stabilizing relief. There's a lot more to be done in the long run, and it requires the good will of both parties.